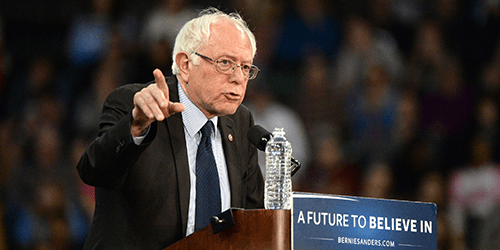 This is the first part of a three-part series that examines where the 2016 U.S. presidential candidates stand on net neutrality.Net neutrality

is the most important political issue facing the cord cutting world right now. When we connect our computers to the internet and browse it freely, we're enjoying the “neutral net” – an internet that doesn't restrict us from any particular sites.

But that's not how some companies would like the internet to be. ISPs could make more more money if they were allowed to block off certain websites and charge users more to access them. A non-neutral net might look something like this scary image created by a Reddit user. And even if plans like this never come to fruition, ISPs can still sneakily try to make more money off of certain sites by using tactics like data caps to charge users more for high-bandwidth sites.

The FCC has been relatively kind to net neutrality proponents under President Obama, but we're about to enter a new era. Three new candidates are now vying for the presidential nomination. How would net neutrality be affected by each of them? In this first part of our three-part series, we'll look at Democratic candidate Bernie Sanders.

What Is Bernie Sanders' Position on Net Neutrality?

Bernie Sanders is clearly and vocally in favor of net neutrality. In Sanders' view, the open internet has been a boon for “Democracy both here in the United States and around the world.” The end of net neutrality would by definition be “the end of the Internet as we know it,” Sanders has said. Sanders' actions while a member of the senate (where he represents the State of Vermont) have backed this up.

Back in 2014, Sanders got very fired up about a proposed FCC rule change that he called “grotesquely unfair.” He has encouraged his supporters to join him in battling this and similar restrictions, even going so far as to arm his website with a comment form that sent complaints directly to the FCC.

Sanders sees the open internet as an inherently good thing for democracy. And, as you might expect from a self-proclaimed socialist, he strongly believes that it is the government's role to protect and expand this good thing to all of the people. To that end, Sanders' infrastructure plan (which is primarily aimed at rebuilding things like roads and bridges) sets aside $5 billion a year for five years to improve broadband connectivity.

Broadband access is a necessity, not a luxury. I urge the @FCC to expand Lifeline and help millions of working families get online.

Sanders sees broadband connections as something akin to a basic right. In keeping with this position, Sanders has railed against what he sees as predatory pricing changes in the broadband market. Like many liberal politicians (including his opponent, Hillary Clinton), Sanders tends to view internet connection as a utility – like water or electricity – that everyone ought to have, and thus must be carefully regulated as an industry.

If there's any way to knock Sanders on net neutrality, it's that it hasn't been a big talking point in his presidential campaign. The phrase “net neutrality” doesn't appear anywhere on his presidential campaign website. But it's possible that this reflects the fact that net neutrality isn't an issue where there's a ton of daylight between Sanders and rival Democrat Hillary Clinton. In a general election, we might hear more about it. In any event, Sanders' past positions on the issue make it clear that he is vehemently against any restrictions on internet access.

Bernie passes our test with flying colors. His particular view of broadband access as a right makes him ISPs' worst nightmare, and while he's not too far to the left of most Democrats, he attacks the issue with particular fervor and backs his positions with support for expanded broadband infrastructure. Bernie Sanders is the most pro-net neutrality politician in the presidential race.