In the wake of the FCC’s net neutrality rulings that occurred in 2017, many proposals to level the broadband playing field in America’s increasingly competition-starved marketplace have been put forth.

One old idea that’s been reignited lately is the concept of local loop unbundling; allowing multiple providers to share the same wiring bound for consumers, ideally leading to increased competition in the last mile.

Is this the ultimate answer to our internet woes? Maybe — but first, let’s take a look at how Local Loop Unbundling works.

What is the local loop, and what does it look like?

The local loop is sometimes referred to as a subscriber line or local tail. Essentially, it’s the section of network infrastructure that spans from the demarcation point of a home or business to the network edge. It’s quite literally “the last mile.”

This particular piece of the internet puzzle directly impacts the experience of users, and in America, that’s a real issue. Why? Because the pipes are owned by the same few companies providing the internet service itself, who have no incentive to lease those lines to other providers, who would simply use them to compete for the same customers.

Back in the 1990’s (in the prime of dial-ups ill-fated reign), the concept of unbundling this last mile was proposed. In what was the first major overhaul of the US’s laws in nearly 62 years, the Telecommunications Act of 1996 shook up the entrenched monopolies regional telephone providers held over their respective areas, forcing them to share their lines with potential competitors.

This was short-lived, however, as the emergence of broadband internet soon created an imbalance of power; the telephone companies had to play nice, but the new cable upstarts didn’t. Faced with either forcing both to provide leased lines, or freeing everyone up to do what they wanted, the Supreme Court chose the latter in 2005.

Now, here we are. This is what the local loop largely looks like today in America: 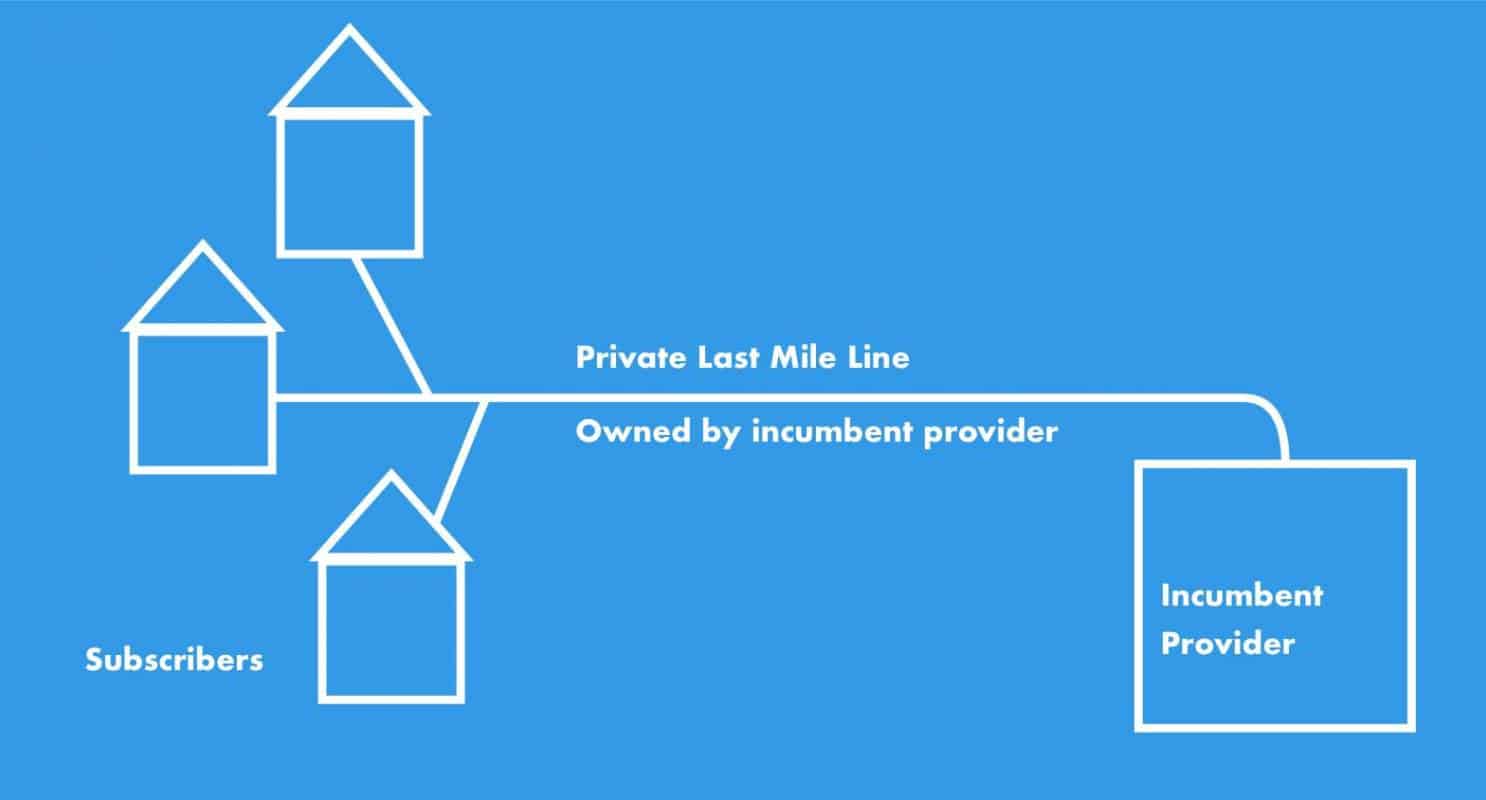 Left unchanged, this means that smaller companies may never be able to keep up, as doing so would mean running their own labyrinthian network of cables across the entire country. What independent, bootstrapping operation could possibly hope to achieve that?

Instead, here is where we’d be with the local loop being unbundled:

In this scenario, the incumbent service provider would still be the owners of their lines – that part wouldn’t change.

However, they’d simply be legally obligated to allow potential competitors to lease these lines, granting them fair access to consumers without having to go through the (often impossible) task of building out their own delivery network.

While the concept of Local Loop Unbundling is associated with DSL, the same concept applies whether you are talking about DSL, coaxial cable, or fiber optic lines; all of them can be shared or leased in the last mile.

Unbundling the loop is common outside the US broadband market

The concept of having multiple companies using the same physical infrastructure isn’t exclusive to the states; it’s been used in practice in places across the world for years.

In fact, America’s hesitance to unbundle the local loop makes it one of the very few developed places on the planet with this issue. But then, no other country has the history of the US. Early innovation in the telecom industry deeply bonded the major companies to their hardware, and now, after all these years, getting them to simply hand them over to their potential usurpers is quite the ask — after all, why should they have to share when they’ve spent billions to build the “pipe?”

If it were to happen, however, you could expect to see a large number of new broadband competitors begin to pop up in areas where a solitary ISP had long dominated the market. This could also weaken the impact of the net neutrality repeal as a whole; if you could simply switch to another provider if yours started doing something unsavory (like throttling your service), the industry could, in effect, police itself.

In Europe, for instance, all providers are required by regulation to allow competitors to lease out their last mile infrastructure. This has led to situations like those in London, where users often have a dozen or more providers, both large and small, to choose from. But could this sort of thing–common as it may be elsewhere–really ever work in the US?

If America ever were to come unbundled, it would almost certainly need to be through decisive government intervention. This could look something like the existing regulations in the UK, or the laws that were put in place for the “Baby Bell” companies in the 90’s–albeit, updated to account for the modern age with multiple network types delivering broadband access.

But the massive telecom corporations wouldn’t take this lying down, and arguably shouldn’t have to. Regardless of the politics behind the change, the current political reality is that ISP lobbyists have a lot of clout in Washington to influence how these things pan out.

Roadblocks to Unbundling in the US Market

Getting the incumbent providers to open up their last mile infrastructure in the US would be, at best, a difficult, protracted battle. Of course, this is just one proposed solution for the issues facing the health of our nation’s internet access today.

Many other potential solutions have been presented, from some sort of a municipal bonds system that would seek to ease the 30-year payoff for laying additional fiber connections to a total, all-encompassing overhaul of how the internet is regulated in America (as emphasized by Tom Wheeler, FCC Commissioner under Barack Obama.)

The current FCC, led by Trump-appointed Commissioner Ajit Pai, seems to be pursuing a different policy of continued deregulation, taking the stance that doing so will relieve the burdens put on the large ISPs, increasing innovation and investments in infrastructure upgrades in the process.

As for which of these solutions can provide the results the country’s aging internet infrastructure needs, that is still yet to be seen. For now, the major US telecoms are happy right where they are, and a sudden wave of regulatory unbundling in the local loop seems unlikely.