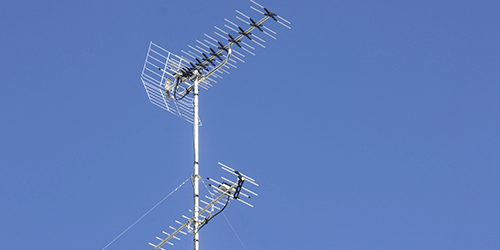 Why are you paying for cable when the channels are free?

Well, not all of them are free. But we're not kidding you: in many areas, major networks are free over the air. All you need is an antenna – you know, those rabbit-ear things that you always see in old photos and TV shows. They may look old-fashioned, but they're a must-buy for any cord cutter who wants to reclaim major network programming.

No, you won't get 3,000 channels over the air. The Food Network doesn't have local programming, so there's no reason for them to have a broadcast station in every city. But certain channels – like CBS, NBC, Fox, and ABC – usually do have local stations, and that means that they're often available for free over the air.

This is huge news for people who can't live without prime-time programming or the nightly network news. Many of these programs aren't available on Netflix, Hulu, or any of the other streaming services. With an antenna, though, they're yours free. And don't forget about the NFL! You'll get several games a week (all the ones you could get with regular cable) over the air if you have CBS, Fox, and NBC within range. That's why we listed an antenna as one of our essential accessories for sports fan cord cutters.

Your mileage may vary, of course, but you can get an idea of which channels are within range for you by using an online tool like this one from NoCable. Tools like this can also give you a simple measure of your distance from local stations, helping you to figure out which type of antenna you need.

Which type? Yes, there are different types of antenna. But don't worry, there are really just a couple of major types – and it's pretty easy to decide which one you'll need.

How You Get It

So what kind of TV antenna do you need? Well, that all depends on where you live. City dwellers are likely to have their own local broadcasts of CBS, NBC, and the rest of the major channels coming from nearby, and can therefore get by with a small indoor antenna. Suburbanites might have to spring for a bigger outdoor antenna. Rural residents could be out of luck entirely. Mark Heisenberg breaks it down nicely in his book My TV Without Cable:

¢€œIf the broadcast stations are within 22 miles from your location, the signal should be strong enough that you can use an indoor omnidirectional antenna. If the distance is greater than that, you may need to buy an outdoor antenna and it should be at least 30 feet above the ground to get good reception.¢€

So what does that mean?

It means that if you live in a place like New York City, you can get by with a cheap omnidirectional antenna like this one

. (¢€œOmnidirectional¢€ just means that you don't have to point it at the source of the signal.) If that antenna looks cheap, it's because it is – but don't worry, it will work just fine in any major city. Hey, look, your high rent is finally paying off!

If you're more than 22 miles from your local major network affiliates – this is you, suburb-dwellers – you'll have to spring for an outdoor antenna. Just look for one with good reviews, like this RCA antenna available on Amazon

And, finally, there's one more factor to consider. If you're too far from your broadcasters to get reception even with an outdoor antenna, there are a few things you can try. Grab a directional antenna (as opposed to an ¢€œomnidirectional¢€ one) and point it right in the direction of your nearest broadcaster. You can also look for amplified antennas, which boost distant signals to give you clearer reception.

An antenna won't work for everyone – some rural residents may find themselves out of range – but for many cord cutters, it's a godsend. So we ask again: why pay for NBC, CBS, Fox, and the rest when they're being given away for free over the air?