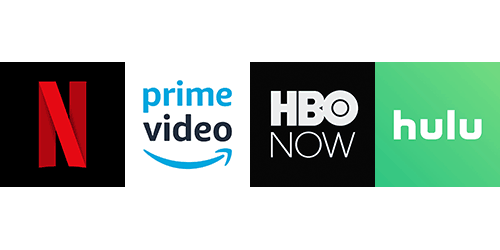 It's July! Cookouts, pools, parks, hikes – and movies, too, right? Whether you're setting up an outdoor movie night or cooling off indoors, you're going to want to know what's changing on the major streaming services in this month of July. That's why we're here with everything you need to know about what's new on Netflix, Amazon, HBO, Hulu, Starz, Crackle, and Tubi TV – as well as the scoop on what you should watch soon before it disappears. Scroll down for the highlights as well as links to the complete lists of changes on each service.

The excellent original Jurassic Park, the kind-of-okay The Lost World: Jurassic Park, and the gloriously terrible Jurassic Park III are all coming to Netflix this month. So is The Princess Diaries (not part of the Jurassic Park franchise) and more of Jerry Seinfeld's Comedians in Cars Getting Coffee. Breakfast at Tiffany's, the Lethal Weapon series, Midnight in Paris, and V for Vendetta are among the films leaving.

Netflix's loss is Amazon's gain as it ads Breakfast at Tiffany's and V for Vendetta, both lately of the competition. Also coming to Amazon this month: American Psycho, Blazing Saddles, Mulholland Drive, and Zodiac.

The gloriously goofy 1966 Batman movie is on HBO this month. So are Good Will Hunting, March of the Penguins, and The Princess Bride – plus relatively recent releases Justice League (very bad) and The Snowman (somehow even worse). On the flip side, we'll say goodbye to Good Morning, Vietnam, as it withdraws along with Deepwater Horizon, Monster's Ball, and Sideways.

A pair of very funny 1980s comedies – Clue and This Is Spinal Tap – are among the highlights of Hulu's incoming class. Also arriving: the second season of Doomsday Preppers, a deeply stupid show that I heartily recommend. Too bad we're losing the original Planet of the Apes and Steel Magnolias – though, happily, not until the end of the month.

You can watch 28 Days Later, An Officer and a Gentleman, and Zodiac this month for free on Crackle, but they're available for just one month, so don't put it off! Feel free to skip Elektra, though.

Tubi TV's July highlights include Invasion of the Body Snatchers and Love and Death. Horror fans will be happy to see that both Amityville Horror films – the 1979 original and the 2005 remake – are on Tubi TV this month. Check out the excellent concert film The Last Waltz, too.