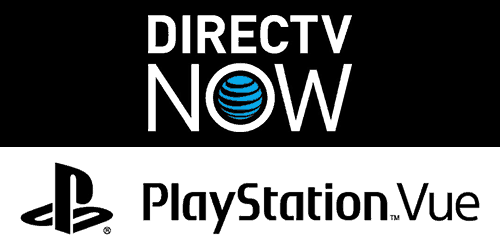 Right now, DirecTV Now leads PlayStation Vue in the content department. That's because PlayStation Vue recently lost the rights to Viacom properties. It's not a huge list of channels, but popular networks like MTV and Comedy Central are among those missing. That's enough to make many prefer DirecTV Now's selection.

Both services have HBO. PlayStation Vue has Showtime, while DirecTV Now has Cinemax.

PlayStation Vue's cheapest package costs less than DirecTV Now's ($29.99/month vs. $35/month). PlayStation Vue tops out at 90+ channels, which can be had for $44.99 or packaged in with HBO and Showtime for $64.99. DirecTV Now's biggest package is 120 channels for $70, and adding HBO or Cinemax will cost you $5 per premium channel. So DirecTV Now can get pricier, but also delivers more content.

Note that adding the premium channels is cheaper on DirecTV Now – you can add them to any package, and they cost just $5 each.

DirecTV Now has a solid user experience, and in our review we noted that the service makes it easy to watch some content on demand. That on demand content isn't as loaded as what you'd get on a service like Hulu, but as a perk tacked onto a live TV service, it's awesome.

PlayStation Vue has a very similar user experience, and it adds a DVR function that really sets it apart from its competition. It also beats DirecTV Now in platform support – DirecTV Now is still waiting for its Roku app, while PlayStation Vue is available on a ton of platforms now.

In our trials, both of these services performed admirably. With that said, DirecTV Now seems to get more complaints on Reddit and other message boards about its streaming quality. Users are reporting crashes, and while we can't vouch for that, it's worth mentioning here.

Of course, DirecTV Now is also quite new. Sling TV had similar problems early on in its life – in fact, Sling TV went months into its lifetime with rather questionable streaming quality – and has since cleaned up its act. So there's plenty of reason to believe that reports like the ones we're seeing on Reddit will die down soon – and, again, we didn't really experience this in our own testing. Go figure.

PlayStation Vue, meanwhile, impressed us with its streaming quality from the beginning and generates fewer complaints in online cord cutting communities.

For the reasons above, I'd give the edge to PlayStation Vue in streaming quality. But DirecTV Now does pretty well here, too.

DirecTV Now vs. PlayStation Vue: Which Should You Get?

DirecTV Now and PlayStation Vue are the two most similar of the two skinny bundles in terms of packages and pricing.

They're not a la carte (like Sling TV) – they just scale up from the smallest package. They're similarly priced. They both stream pretty well.

PlayStation Vue has the edge in user experience, but it lags in content. The missing Viacom channels hurt – Comedy Central and MTV are big-time networks, and it's embarrassing for Vue that they're missing.

For that reason, I give the overall edge to DirecTV Now. If you don't care about those Viacom networks, check out PlayStation Vue instead.