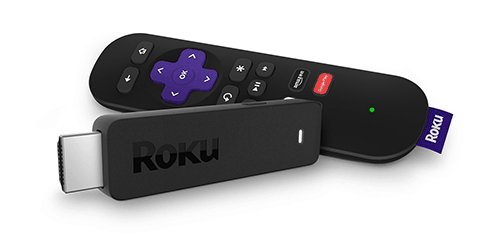 The Roku Streaming Stick and Amazon Fire TV Stick aren't quite as powerful as their older siblings, but they're both great devices in their own right. In fact, if you don't have a 4K TV, you'll probably want to consider saving yourself $50 to $100 or so and going with a lightweight streaming stick over a full-sized streaming box. But which streaming stick should you buy? Here's our breakdown of the rivalry between the Amazon Fire TV Stick and the Roku Streaming Stick.

The Roku Streaming Stick and Fire TV Stick are very, very close in terms of specs and streaming performance. Both top out at 1080p (sorry, 4K fans). Both have quad-core processors and point-anywhere remotes. And both devices received high marks in streaming quality in our Cordcutting.com reviews.

The real difference between these two devices isn't about what's under the hood – it's about the user experience. We'll explore that in these next few sections.

Both sticks have great operating systems, but they offer two different experiences. Amazon's Android-based Fire OS has a bit more depth, but it's not as simple or user-friendly as Roku's OS. The Fire OS has more ways to customize and access your apps, and it has Alexa (Amazon's digital assistant) built in, which we'll cover in a moment.

Here at Cordcutting.com, we're on record as huge fans of Roku's OS. It's not highly customizable, but it's absolutely idiot-proof and it's very easy on the eyes. Of these two devices, the Roku Streaming Stick offers the simpler plug-and-play experience. The Fire TV Stick, on the other hand, is a bit more customizable – and a bit more complex.

It's also worth noting that the Fire TV Stick surfaces Amazon content in various ways throughout its OS. If you have Amazon Prime, you'll find that more tabs and options cater to you. Roku's platform is more brand-agnostic. That doesn't meant that the Fire TV Stick is only for Amazon fans, but it does mean that Amazon power-users will find more perks – and non-users will find some vestigial features.

Both the Roku Streaming Stick and Fire TV Stick have a voice search feature, but the Fire TV Stick's voice controls can do more than just discover content.

First, the Roku Streaming Stick: Roku comes with a voice search feature that lets you search for titles, actors, and more. It's an agnostic search – Roku doesn't have its own content to promote, so you'll just see your various viewing options listed in price order.

Fire TV Stick has Alexa, Amazon's personal digital assistant. Alexa is more than just a voice search feature: she can answer questions, launch apps, and even order Domino's pizza. If you're comfortable controlling your device with your voice, Alexa is a huge selling point for the Fire TV Stick.

When it comes to streaming, nobody can touch Roku's channel library. Other than the recently released DIRECTV NOW, Roku has just about every streaming app under the sun (that DIRECTV NOW channel, Roku assures us, will be here by the end of this year's first quarter). Amazon's app store comes pretty close, but it's missing a few minor streaming services (NHL.TV, for instance).

Amazon has an edge when it comes to other types of apps. Roku is very streaming-focused, so the Fire TV Stick has the advantage when it comes to gaming (most of the games are casual, mobile-gaming style fare). Amazon also has some practical non-streaming and non-gaming apps, and some skills built into Alexa. A Roku can't order you some Domino's, but the Fire TV Stick can.

It's hard to go wrong with either of these devices, which are very similar. Generally, I'd recommend the Roku to streaming-focused users who want a simple and easy-to-use device. But there are a few types of people who will want to opt for the Fire TV Stick: if you're interested in light gaming, want to use your voice to control your device, really love Amazon products and services, or want a more customizable OS, the Fire TV Stick is the play.