Watch movies, shows, live TV, YouTube, and photos streaming on your TV from all your family's devices.
8 / 10  Review Rating
Buy on Best Buy »

It seems like every company has come out with a new streaming device lately, and Google is no exception. They recently released the newest version of their Chromecast (for simplicity’s sake, we’re going to call it the “Chromecast 2”). So what is the Chromecast 2, and is it any good? Here’s our review. 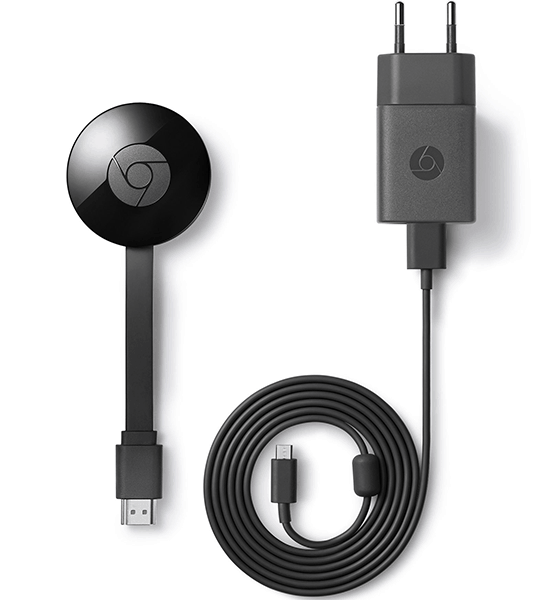 The Chromecast 2 is a prettier device than the original Chromecast. We grabbed the black one, but it also comes in red and “lemonade.”

The magnetized strip lets you fold the Chromecast over to better hide it behind your TV. The way my TV's ports were set up, I wasn't able to use the magnet. Even with the magnetic band hanging limp, though, the device was still significantly less visible than the old Chromecast was. We found the new device to be a big aesthetic upgrade from the old one.

The rest of the set-up is pretty much the same. Even the cords are the exact same length. The USB connection comes straight out of the top of the wall charger now, and the thing is gray, and that's about all that's changed.

Let's start with the first. The interesting thing about Chromecast is that it doesn't operate the same way that other major streaming devices do. Apple TV, Amazon Fire TV, and Roku 4 all work in a similar way: you turn on the box, and it loads up a menu of apps. Your apps are on the box, and you use your controller to select your choice.

With the Chromecast, on the other hand, you're just using the casting stick to reflect a choice you make on another device – a computer, tablet, phone, etc. Whether this is better for you is really a matter of taste. Generally, we found it to be a really convenient way to get content up on the big screen. If you often find yourself on a mobile device like a tablet, Chromecast's format will probably appeal to you.

To cast with the Chromecast, you'll have to download the Chromecast app. This enables you to cast from various supported apps with the touch of a button. You'll also be able to cast the entire screen of Android devices. The Chromecast experience is pretty simple and streamlined once you get used to the idea of your TV as a space to sling content to, rather than a place to discover it.

As for content discovery, the new Chromecast app (which you can use with the old Chromecast as well as the Chromecast 2) has improved in that department. When you open the app, you can now see a selection of your Chromecast-enabled apps with suggestions on what to watch. It's a really nice improvement, though not one that's tied to the Chromecast 2. It's a reason to get a Chromecast, but not a reason to upgrade if you already have an old one that works.

Chromecast's content discovery and other perks are, of course, a bit less robust than those of the big streaming boxes. But Chromecast comes at a much lower price, and as we mentioned before, doesn't really compete as directly with the Apple TV and Fire TV as it might first appear.

Okay, now for that second major question: what does the Chromecast 2 do that the Chromecast 1 does not? Well, one of the big features that Google pitched in their announcement was that your Chromecast-enabled apps will talk to Chromecast in the background from the moment they're opened, meaning that they're ready to play our content instantly. This, Google says, will spare you the Chromecast loading screen. If you have an old Chromecast, you know the one we're talking about: it's the one with the three dots.

There was an improvement in loading times with the new Chromecast, but we weren't blown away by it. Frankly, the old Chromecast load times weren't that annoying. The new ones are better, but they're not quite as fast as they looked in Google's demonstrations. You might save a second or two per load, which is nice, but not life-changing.

Chromecast 2 is also supposed to be better connected to Wi-Fi than Chromecast 1, thanks to a new interior antenna setup. From our experience, that seems to be true. That said, we had to wait a pretty long time before either device had any problems. If you're having connectivity problems with your Chromecast 1, you'll probably find Chromecast 2 to be a step up; but since we very rarely had any issues with Chromecast 1's connection, we saw the improvement as nice, but fairly insignificant.

By far the coolest new Chromecast feature is the ability to pause from any device – in other words, you can now cast something from your tablet, pick up your phone, and pause the stream from the Chromecast app. But that's an app improvement, and it actually works just as well on the Chromecast 1, so it's not really a selling point for the new device.

The new Chromecast is $35, the same price as the old one was. It's by far the cheapest flagship streaming device, and it even beats the “stick” versions of its competitors (like the Roku Stick and the Amazon Fire TV stick, which cost around $50 and $40 respectively) in the price department.

Watch movies, shows, live TV, YouTube, and photos streaming on your TV from all your family's devices.

The new Chromecast is a nice little machine, and it does everything as well or better than the old Chromecast did. However, this new version doesn't add a ton of value for users that already own the original Chromecast.

To elaborate a bit: if you don't have a streaming or casting device for your main television, Chromecast 2 is a reliable, cheap, and elegant solution, and we highly recommend it. With new features like the ability to pause from other devices, Chromecast is a better option than ever. If, however, you already own a first-generation Chromecast, we don't see a lot of reasons to upgrade right now.

Watch movies, shows, live TV, YouTube, and photos streaming on your TV from all your family's devices.
8 / 10  Review Rating
Buy on Best Buy »

One thought on “Review of the Chromecast 2”