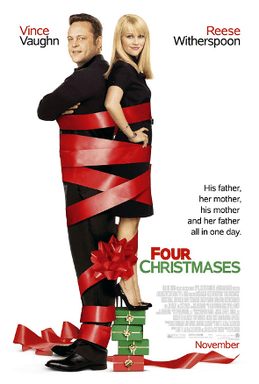 Where can you stream Four Christmases

Streaming is an ideal way to watch a movie, especially if you don’t want to leave the house. But the rules of the streaming game aren’t always clear. For instance, if a streaming service like Hulu has the rights to Four Christmases, then other services like HBO Max or Netflix may not have it. What if you’re OK with renting or buying it instead? You can often do that on platforms like Amazon Prime Video or FandangoNow, but sometimes even these options aren’t available. Then there’s the issue of borders: Your options often change depending on what country you’re watching from. A streaming service’s lineup will often look different in Europe than it does in the United States, for example.

So where can you currently find Four Christmases? Here’s what you should know.

Where to Watch Four Christmases Online


Pro Tip: With a VPN, you can unlock Netflix in Canada to stream Four Christmases.
ExpressVPN is our #1 Pick.

What if Four Christmases Isn’t Available in Your Country?

We obviously like streaming services here, but they can still throw up some roadblocks. Streaming rights to movies like Four Christmases are highly profitable, and what makes sense from a studio’s point of view may not always make sense to typical streamers like us. When we want to see a particular movie, we’re not particularly interested in talking to entertainment lawyers to figure out why, for instance, Four Christmases ended up on Netflix in one country but not another.

If you find out that a movie you like isn’t on your favorite service, or at least not in your particular country, that’s a real bummer. But all hope isn’t lost. All we have to do is sing and Santa’s sleigh will — wait, sorry, that’s Elf, not Four Christmases. The real loophole involves something called Virtual Private Networks, or VPNs.

When you open up Netflix or another streaming app, your device uses your location to figure out what kind of content you can watch. It does that by using your IP address. Now, IP addresses aren’t always exact. For some reason, my devices can place me as much as 60 miles south of where I actually live, and I don’t actually want to shop at a Target store that far away. But that’s neither here nor there. But they’re good enough to tell Netflix which country you’re in — and, therefore, which Netflix library you should have access to.

VPNs allow you to appear like you’re actually streaming content from somewhere else. You’re at your regular house, but your VPN makes it seem like you’re in another place. It can even make it seem like you’re in another country. If the internet were a house, it would be like entering through a side door instead of the front door. Everyone can see you come in through the front door, and sometimes, you don’t want to be visible.

So what happens if you set your VPN location to a country where Four Christmases is available on Netflix? It’s basically like getting an extra gift in your stocking.


Did You Know: VPN's can make it look like you are in another country? ExpressVPN is our top-rated VPN that will allow you to stream Four Christmases with Netflix.

Why I Love to Stream Four Christmases

If you know what you’re doing and where to look, it’s not hard to stream a movie like Four Christmases. Four Christmases isn’t perfect, but it’s perfect for casual viewing during the holidays. It’s a movie that you can put on while you’re wrapping presents, decorating cookies, or even shopping online for gifts.

It’s also got a huge cast full of big names. The movie centers on a couple played by Reese Witherspoon and Vince Vaughn. The setup is a little complicated, but you learn quickly that the two of them always try to avoid their respective families’ holiday get-togethers. Then one year, their hand is forced. They no longer have a choice, so they have to make the best of it. Along the way, they meet up with everyone from Sissy Spacek to Dwight Yoakam. It’s about the family you’re born into, sure, but it’s also about the one you choose to make. See the movie trailer below:

Four Christmases is just one of many Christmas movies worth putting on this holiday season. If you’re looking for more ways to stream your favorite holiday movies, you’ve come to the right place. We’re here to tell you how to stream other holiday hits like Christmas With the Kranks. And if you want a more old-school Christmas movie like Gremlins, we’ve got a guide to streaming Gremlins too. But whatever you do, please don’t feed or stream that one after midnight.

There’s also tons of new holiday movies coming out all the time, and not just on Netflix. If you’ve got a subscription to Hulu already, it can’t hurt to take a look at what kind of Christmas movies are streaming there, too!