In the United States, Internet deregulation is the norm (for now at least).

In its wake, numerous ideas about how to fight back against the prospect of an increasingly restrictive internet have been presented. Some of these plans are more realistic than others.

One concept that has been rapidly gaining popularity is the mesh networking.

What is mesh networking, and why should I care?

At its most basic, mesh networking is a way for users to connect directly to other peers in a given area, creating a “mesh” of network access points, repeating and bolstering the signal away from a central starting point. This smaller network is often (but not always) directly connected to the wider internet as a whole.

What makes these networks particularly interesting is that they are completely decentralized. This means that the only way for the connection to be interrupted, stopped or otherwise altered would be to eliminate all of the access points themselves.

In addition, unlike ISPs, which essentially act as gatekeepers requiring you to pay a fee to gain access to the internet, most mesh networks democratize this connection, allowing anyone who is connected to access anything they’d like to–all without any monthly charge, in many cases. Mesh networks have famously been used in places like Cuba for this very reason — even when not connected to the Internet at large, they still allow for a “local” peer-to-peer version of IP networked communications.

So, we know what a mesh network is, but what does it look like, and how exactly does it work?

Creating the physical network; the sum of its parts 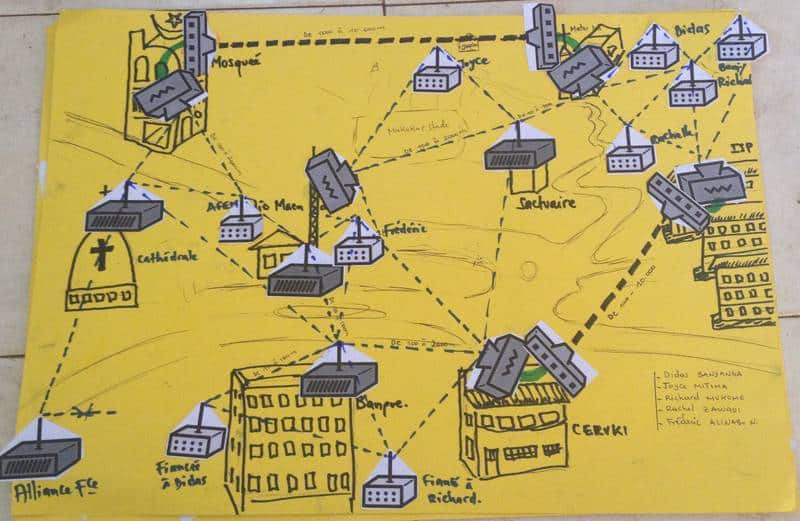 To help visualize how a mesh network is set up, you can imagine them as a series of repeated Wi-Fi hotspot connections, though this wouldn’t be entirely accurate from a technical perspective. In reality, the network relies upon numerous individual nodes – specialized routing equipment –
which are connected back to a single point that in turn is wired to the internet backbone.

Nodes act as the central support structure for the mesh network, providing access points that can communicate with any other node in the chain. These connect directly to your home or business, where a specialized router is installed that can pick up the signal and relay it to clients, which in this case would be our cell phones, tablets, TVs, and any other smart devices you use. Should a node go down for whatever reason, a properly configured mesh network can dynamically reroute itself to bridge the gap.

If the central connection to the internet was taken offline, all those on the mesh network would lose connectivity as well, but the network itself would remain online, allowing users to communicate directly with each other and share information. This is particularly relevant in a world where the internet was shut down by governments around the world over 50 times in 2016 alone, costing over 2.4 billion dollars in the process.

All of this is possible because of specialized software that is used to enable the various nodes on a network to communicate with each other. This software is also responsible for constantly rerouting connections based on signal and bandwidth availability, hardware outages, and expanding service areas. Many mesh networking projects rely on open source software and firmware such as OpenWrt to link out their various nodes, while others build custom frameworks depending upon their specific needs.

Mesh Network Applications for home use

Mesh networks have been used to improve Wi-Fi signal propagation in large or irregularly-shaped homes for years now, and it remains a popular solution today. If you find that certain rooms or sections of your home get poorer signal relative to others, building out a mesh network may help to even it out. Essentially, you’d be installing a series of access points in your home that link together to create the mesh, allowing you to bolster the signal even in places further away from your central router.

The potential for using mesh networking to cover vast swathes of land is what’s got people excited about its current and future implications. In a wide area setting, the same principles used for making a mesh network work in your home apply, albeit on a much larger scale. What’s interesting about these projects is that, for the most part, they aren’t backed by an ISP, or even a business at all. Instead, they are public works initiatives designed, maintained and expanded by the community itself.

There are many examples of mesh networks being used to provide internet access to users all over the world, from the largest cities to the most sparsely populated villages.

NYC Mesh is one of the largest and most well-known examples of mesh networking in operation today. With over a hundred nodes online, the community-owned service has a large coverage area spanning most of lower Manhattan. Thanks to the addition of another “supernode” (a node with multiple antennas and routing equipment that can reach further than a standard node), a sizable portion of Brooklyn is now connected as well. 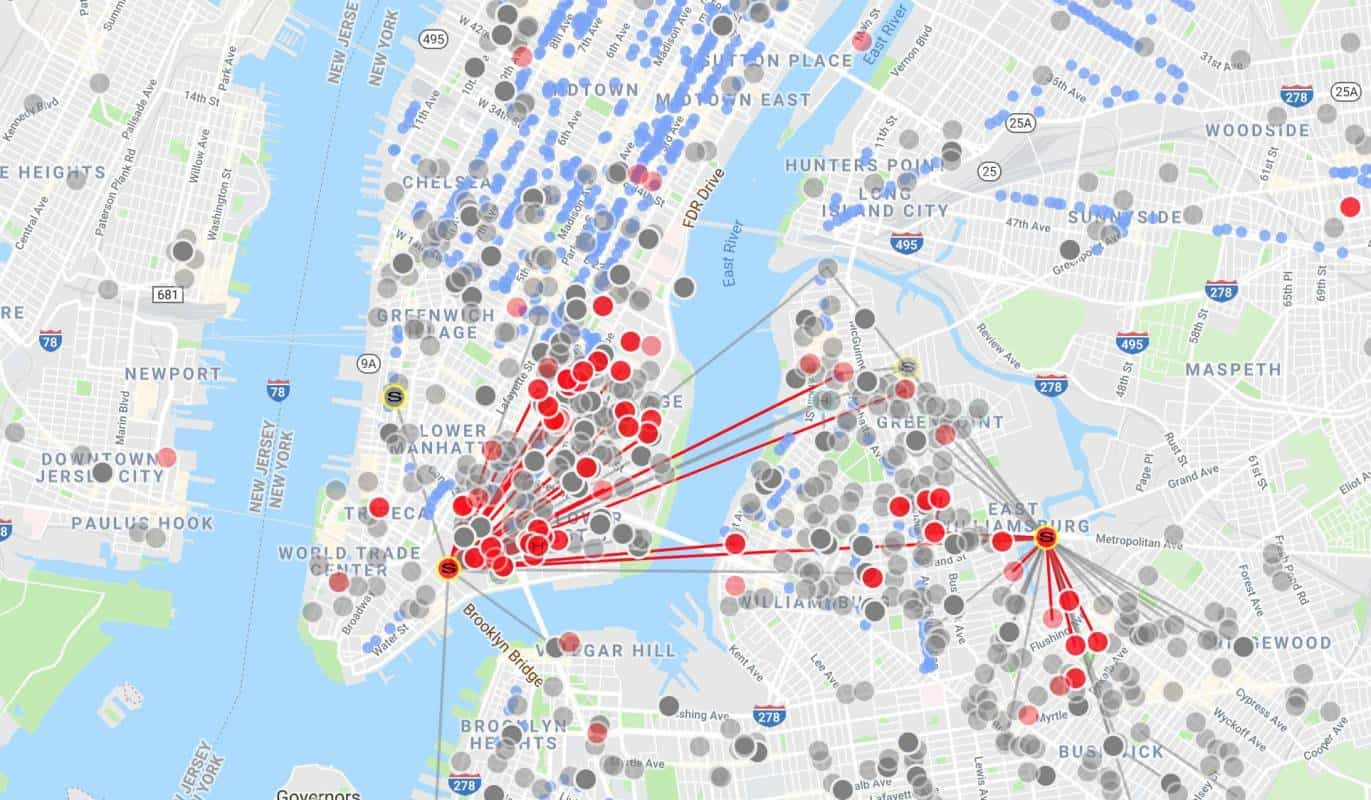 A map of NYC Mesh’s coverage area. Red dots are active nodes, while grey dots are spots requested by the community. The initiative’s website states that about three new nodes are coming online per week.

Detroit has long been a city with challenges, and that holds true on the side of robust, affordable internet connectivity as well. In response to the ever-increasing need to be connected to the wider world, the Equitable Internet Initiative was established by the Detroit Community Technology Project, which itself was formed in 2014. Though the mesh network itself currently only covers three neighborhoods, the program is growing rapidly, offering training programs that aim to help community leaders bring connectivity to their area.

One of the newer mesh networking projects to be announced, Honolulu Mesh is currently in the planning stages of its operation. It is backed by both Motherboard and VICE, with the hopes of building out a robust network for those in the Honolulu area to take advantage of. Announced as a response to the end of net neutrality, more of these community mesh projects are expected to pop up in the coming months and years.

Spain’s Guifi project started with a single, solitary node back in 2004, but today, it boasts the largest mesh network on the planet, featuring over 34,000 active nodes that span a huge portion of the Catalonian coastline. Additionally, another 17,000 or so locations are currently being planned for the near future. The organization estimates that more than 50,000 individuals utilize the network to connect to the internet. 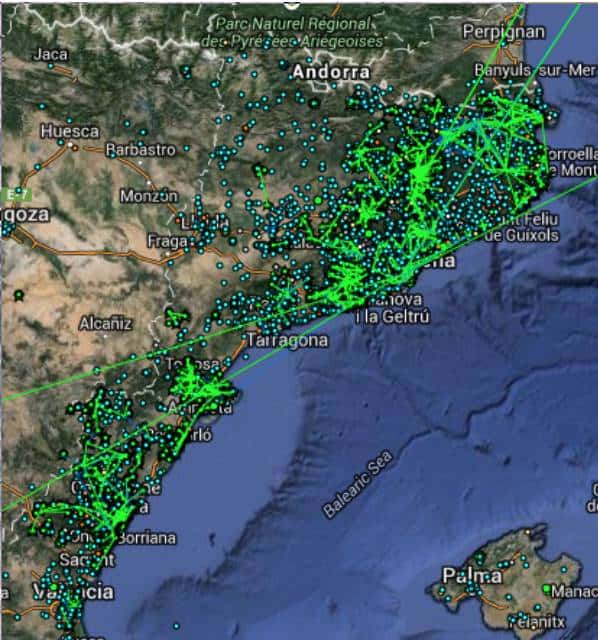 As exciting as they may be, mesh networks remain a niche solution in the US, for the moment. Though there are many benefits to the technology, several roadblocks still need to be overcome before mesh networking can be considered a viable alternative on a nationwide level.

Complexity: For all their charm, mesh networks are still quite a mystery to the average American. The idea of getting directly involved in a community-run project where you are responsible for helping operate and maintain equipment is still a tall order for many who’d prefer to simply pay a monthly fee to their provider in exchange for internet service.

Cost to maintain: Because most mesh networking setups allow users to connect for free, hardware, expansion, and day-to-day operational costs can be a real challenge. Donations, equipment fees, and grants can help projects stay afloat, but expansion efforts can be limited due to a simple lack of capital.

Political issues: While mesh networks themselves are legal in most places across the US, most of the massive telecom companies that currently dominate the low-competition ISP market look down upon the practice. Users looking to start a community-driven mesh network using one of these services may run into roadblocks in the form of a written warning, or even service cutoffs in some cases.

Looking to the future: What’s next for Mesh Networking

As large, concerted mesh networking efforts like Spain’s Guifi and NYC Mesh continue to enter the public consciousness, it’s possible that the issues discussed above will be less of a hindrance to developing and expanding similar networks across the country and beyond. Already, we are seeing their enormous potential for connecting areas which have been entirely ignored by the internet era.

With the sharp rise of activism in favor of net neutrality and a fair, open internet in 2017, it’s likely that many more communities will be attracted to the idea of creating their own decentralized, independently-operated hub networks. Given enough time, this may allow us to rethink our relationship with the internet entirely, as well as with those corporations currently vying for more control over what we do online.

If you’re interested in learning more about building out a mesh network, we recommend taking advantage of the following resources.