2018 was been a big year for Exede satellite Internet. First, they changed their name to Viasat. Second, they launched a major satellite upgrade (Viasat 2) that vaulted their speed range ahead of HughesNet, which is their only major competitor in the continental US.

The new speeds came with a new pricing strategy, which features higher data limits than HughesNet, although the speeds can be slower in comparison. (At least, on the low-end plans.)

The Liberty 25 plan from Viasat offers 12 Mbps download speeds and 25 MB of data usage. This outclasses competing offers in the price range by 5 MB, meaning you can use 5 MB more data before your plan gets slowed down. Like most satellite Internet plans currently on the market, Liberty 25 has a soft data cap — once you go past the data limit, your plan will be slowed down to 1-5 Mbps.

In some areas, Viasat has launched “unlimited” plans that offer higher cutoff points before you start getting throttled. In our opinion, the Liberty 25 plan is still a better choice for most customers. This is mainly because the “Viasat 2” unlimited plans still cut off data usage at 40-100 MB, which means that they're still not an entirely viable choice for frequent streaming. If you can deal with 25 MB of data per month (and most small households that have a separate TV provider like Dish or DirecTV can easily), then the locked-in $75 price on Liberty 25 will save you a lot of money… to the tune of $25/month, or $300/year.

Viasat is currently knocking the price for Liberty 25 down to $50/ month for the first three months of a two-year contract. Keep in mind that the price will rise to $75 after that, and remain at $75 for the length of your contract. 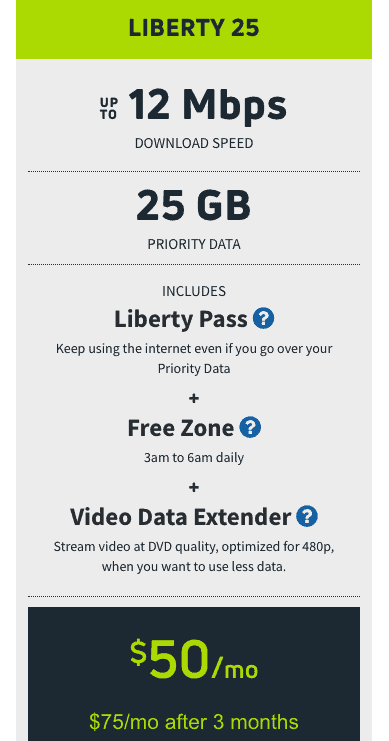 What's notable about Viasat's “Liberty 50” Plan is that it's the only plan on the market currently that offers a true wired broadband alternative at a national level. It isn't as good as Viasat's “Unlimited Gold” plan, but since that plan has limited availability we don't yet list it. (You can check if it's at your address when you call to sign up.) The 50 MB data cap is lower than most DSL plans by around 200 MB, but offers enough data for the average household even with occasional HD streaming and other bandwidth-guzzling activities.

Unlike wired Internet, the service comes at a steep cost, however. The promotional price of $75 is already high, and after the first three months you're locked in at $100/month for a full two-year contract. If you opt for their Unlimited Gold plan, it goes up another 50% to $150/month plus fees. That's a deal-breaker for many customers but is standard for the satellite Internet market.

If you are a heavy Internet user and want a service that's similar to Cable or DSL, the Liberty 50 plan is essentially the only way to get it. 12 Mbps is sufficient to handle HD streaming, and if you go over the 50 MB data cap service is slowed to around 1 Mbps rather than cut off. 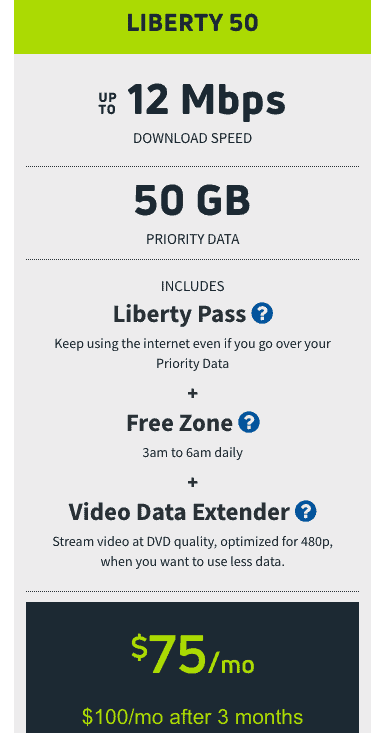 Viasat Internet: When Is It a Good Choice?

In spite of their recent technology upgrade, Viasat internet suffers from the same problems as every other satellite Internet provider: data use limitations, latency (or lag) on performance, and high pricing compared to wired options like Cable, DSL, or Fiber Internet.

As a rule of thumb, we only recommend Viasat (or their competitor HughesNet) to customers who have no wired options. Wired internet offers better performance for much less money, and are more compatible with streaming services like Netflix.

For this reason, satellite Internet is most commonly chosen by customers in rural areas with limited options.

Before you land on Viasat as the only option, be sure to check your address for lesser-known alternatives. These could include services like fixed wireless (see our guide to comparing fixed wireless Internet providers for more information). DSL and fixed wireless have drawbacks, but are a better pick than satellite in most cases, if they’re available.

When is Satellite Internet better than DSL?

Satellite Internet is not ideal if you have access to a broadband-class DSL connection of at least 15 Mbps. However, as many of us who have lived in the country know, DSL connections are often much, much slower — even when advertised at higher speeds. This is largely due to the copper cables DSL is delivered on, which tend to be less well maintained than in more densely populated urban areas.

Which is better, Viasat or HughesNet?

Overall, Viasat currently offers the best pricing for the amount of data you get. HughesNet has better speeds on cheaper plans, but the low data caps (as low as 10 GB…) cancel out the value of faster speeds in our opinion, since you’ll quickly eat through them doing anything intensive like Skype or streaming Netflix. Viasat also has “unlimited” plans in some areas. These plans aren’t technically unlimited since they throttle after 100 GB or so, but they’re far and above the competition in terms of data allowance.

Viasat currently charges $9.99/month in most cases for equipment. This will include the dish you need to receive service and the modem that delivers the connection to your house. However, they charge an additional $5/month for a Wi-Fi enabled modem. This being 2019, it’d be weird if you didn’t want that for use with your phone, tablets, laptops, etc. You also have the option of paying for equipment up front. This will cost a flat $299 plus the cost of your preferred Wi-Fi router (generally $50 or so). (More information on buying vs. renting a Wi-Fi modem/router unit here.)

All in, that pays for itself within 2–3 years if you pay upfront. Since most rural customers subscribe for longer than that, we recommend paying upfront if you can afford it.

Viasat has two options for terminating a contract, sadly both involving an Early Termination Fee (ETF) of some description.

Option one: No Long-term Contract. No ETFs for customers who sign up to Viasat’s no long-term contract AND paid an upfront $300 fee. If you ask us, this behaves suspiciously like an ETF but there is the benefit of being to cancel at any time rather than be locked into a contract.

Option two: Cancel with a Contract. You’ll have to pay $15/month for every month remaining in your contract, which quickly adds up to hundreds of dollars. ($270 if one and half years are left, $180 if one year is left, etc.)

This is one of the biggest drawbacks about Viasat. That said, the trend of charging high early termination fees is unfortunately common among providers serving rural areas, where the low density of subscribers makes it hard for providers to eat the cost of month-to-month customers who might disappear at any moment.

Conclusion: Viasat is Better Than HughesNet as of 2019, But Falls Behind DSL and Cable

Overall, Viasat is our top recommendation as of 2019. Until HughesNet launches another satellite upgrade, or Elon Musk launches the much-talked-about Starlink (a question of years in both cases), Viasat has the only plans that rival DSL and Cable in terms of speed, bandwidth, and data allowances. Viasat's deals are just better than the deals on HughesNet that we've seen.

If you’re concerned about fitting your Netflix habit into a small data plan, it’s worth considering a TV-specific satellite provider like DirecTV or Dish. It requires two dishes in the yard, two bills, and two contracts, but you’ll get much better TV service and won’t have to worry about blowing through your data limit on a Netflix binge. Or more realistically, someone else in your household running through it.