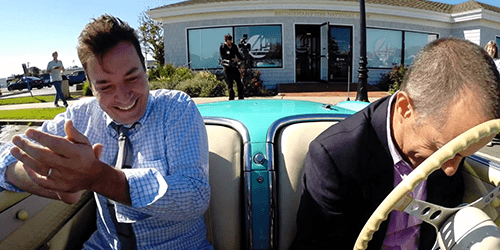 Jerry Seinfeld's Comedians in Cars Getting Coffee, once Crackle's most high-profile original series, is headed to Netflix thanks to a new deal inked between the comedian and the streaming giant. The deal includes new episodes as well as installments that original aired on Crackle.

Starting in late 2017, new episodes of Comedians in Cars Getting Coffee will debut on Netflix. This year's season will include 24 episodes, and Netflix says that more will follow in 2018 “and beyond.” Seinfeld is bringing 59 older episodes to Netflix with him, too. Those older episodes will no longer be available on Crackle.

Also included in the deal are two new exclusive stand-up specials. Those specials have not yet been filmed, but Netflix says they'll arrive later this year.

The deal is a bummer for Crackle, which has never had an original series as beloved as Comedians in Cars Getting Coffee. Seinfeld's series earned three Emmy nominations. Unlike Netflix, Crackle operates on an ad-supported basis, meaning that it doesn't charge users a subscription fee. It's far smaller than Netflix, but it's successful in its niche. Now Crackle will have to fend off rivals like Tubi TV without the help of its best-known original series.

Netflix, meanwhile, gains a new addition to its comedy arsenal. Netflix has been big on comedy lately, and on stand-up in particular. Seinfeld's two planned stand-up exclusives will further bolster Netflix's stand-up selection.