AT&T TV is the latest streaming solution from AT&T. Careful, now — AT&T TV is not the same thing as AT&T TV Now, despite their very similar brand names. Nor is AT&T TV the same thing as AT&T's old pay TV services, despite the branding. AT&T TV is actually a streaming option, but a different one than AT&T TV Now — and, for that matter, AT&T WatchTV. AT&T has three different streaming services, and each has their own unique advantages and disadvantages. Among these three, AT&T TV is the one that most clearly resembles legacy pay TV.

The defining trait of the AT&T TV experience is how similar it is to cable. From signing up and setting up the service to flipping through channels, this service feels like its legacy pay TV forebears — only better. 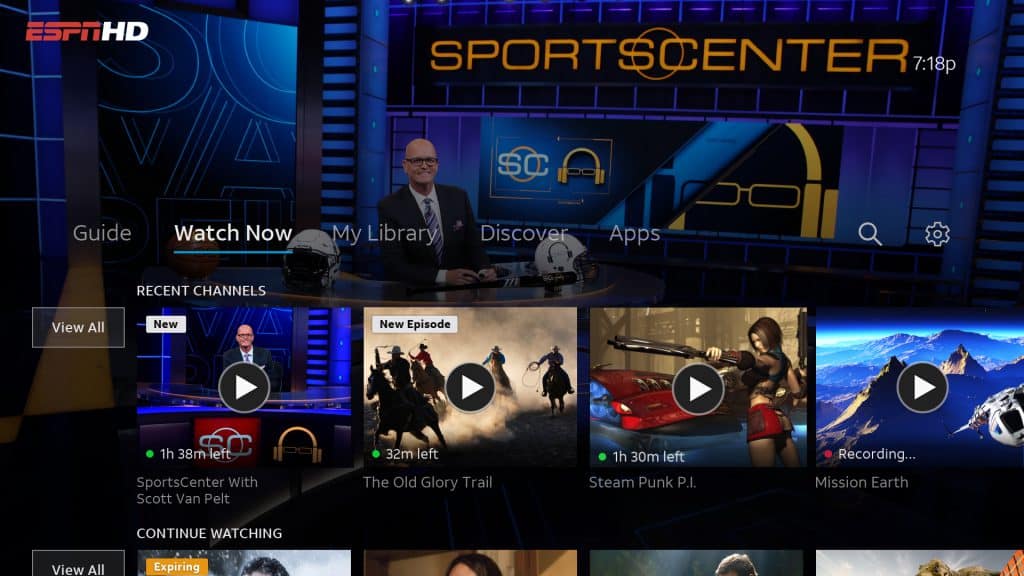 We've spilled a lot of digital ink on this site ragging on cable over the years, but we have always been clear about our objections. Cable is too expensive. It ties too many channels together in huge bundles. It doesn't offer the flexibility that streaming services do.

Some, but not all, of these criticisms can apply to AT&T TV, too (and we'll talk about those in a moment). But there's one thing we've rarely found fault with in legacy pay TV services like cable and satellite, and that's the user experience that you get from your couch.

From the TV guide grid menu to the simple ability to channel surf, the couch-potato experience that cable and satellite services offer is still second to none. Skinny bundles like Sling TV and AT&T's own AT&T TV have rarely come close to approximating the simple pleasure of “seeing what's on” and channel surfing. Loading times and menu systems that emphasize Netflix-style “content discovery” get in the way. Now, for the first time, there's a service that really feels like cable. If you would rather channel surf than browse some algorithm-based recommendations, then this is the service for you.

AT&T TV also has a built-in DVR service. This aspect works in pretty much exactly the same way as you'd expect, and we found it to be a breeze to set up recordings and track down the content we'd recorded. You can fast-forward through the commercials of the programs you record. You get 500 hours of cloud DVR space, which is plenty — and considerably more than is offered by most skinny bundles (Sling TV, for example, offers just 10 hours for free and 50 hours for a premium).

Given that this service runs on an Android TV box, it's no surprise to see Google Voice capabilities on board. I found the Google Voice to be rather useful in quickly changing channels and performing content searches.

Live TV streaming services serve one purpose above all: They give cord cutters access to the live TV networks that they would otherwise lose by canceling their cable or satellite service. In this department, AT&T TV excels.

We've already established that AT&T TV feels a whole lot like cable, and that extends to AT&T TV's channel bundles. Even the slimmest of AT&T TV's bundles includes, as of this writing, around 75 channels. The largest has well over 150. That's significantly more than most skinny bundles offer. Entry-level bundles from Hulu + Live TV, YouTube TV, and other such services typically offer 40 to 50 channels or so.

Naturally, the networks covered include all of the ones you'd expect of a cable or satellite service: AMC, ESPN, FS1, TBS, TNT, and HGTV, to name just a few. Popular networks that are sometimes missing from skinny bundles are virtually all present and accounted for here, including Viacom networks like MTV and Nickelodeon and Disney networks like ABC and ESPN. All four major networks were available to us in our trials.

And then there's the on-demand content: Thousands of titles of the stuff. With a few exceptions, everything that has aired on any of the included channels in the past 72 hours is available on demand.

By virtually any measure, this is the most comprehensive live TV streaming service ever offered. Of course, that's by design; comparing the channel counts of AT&T TV and Sling TV is eye-popping, but useless, and the same can be said of their prices (in fact, we'll say it ourselves in a later section). Suffice it to say that in the content area, as in many others, AT&T TV is more like cable than any streaming service yet devised.

Color us impressed by AT&T TV ‘s content all the same. We may not miss cable's prices, but we sure do miss some of its content. AT&T TV is bringing that content to the world of streaming.

By and large, I was quite impressed with the streaming quality that I got out of AT&T TV. AT&T TV streamed smoothly and consistently in HD in both live and on-demand situations. That makes sense, given the wired Ethernet connection that the service demands and the powerful hardware built into the AT&T TV Android TV box.

AT&T TV's Android TV box is 4K-ready, but there is no 4K content available on AT&T TV as of this writing. That's not particularly surprising, though, since 4K live streaming is virtually unheard-of. None of AT&T TV's competitors have it, either — though, of course, old-school cable and satellite services do.

AT&T TV differs from most streaming services in a lot of ways, and platform support is certainly one of those ways.

Watching AT&T TV on your television means sticking with one box. The AT&T TV box is runs a modified version of Google's Android TV platform.

Android TV is great, and it offers apps for just about all of the streaming services that you might want to use (including Netflix, Amazon Prime Video, Hulu, Disney+, and more). But it's important to note that the AT&T TV experience is fully integrated into this special version of Android TV running on this specific AT&T streaming box. AT&T TV does not run within an app, and you can't open the service up on a Roku device or Fire TV device. You can't even open up an AT&T TV app on another Android TV device — you need to be using the specific box that you get from AT&T, and you'll need one box for each TV that you want to use to watch AT&T TV. AT&T TV's marketing materials brag that there is “no cable box,” but the Android TV box that AT&T TV runs on is a cable box in all but name.

The lone exception to AT&T TV's reliance on its own set-top box is the AT&T TV mobile app, which allows you to watch the service on your smartphone or tablet. That's a welcome addition and presents an advantage over some cable and satellite services. Customers are limited to three concurrent streams at a time.

Compared to true cord-cutting services, though, AT&T TV is way behind on platform support. If you're looking for a truly on-the-go, streaming-native service, this isn't it. AT&T's true cord-cutting offering is AT&T TV Now, not AT&T TV.

AT&T TV offers a lot. In fact, it offers quite a bit more than most streaming services we review. This is not a “skinny bundle.” It's basically cable for the internet age, and the price reflects that.

From the cord-cutting perspective, AT&T TV's prices and contracts are a clear disadvantage. If you're looking to cut cable and save money, this isn't the service for you. On the other hand, AT&T TV's services are in many ways a step up from cable. If you find cable and satellite prices acceptable and want a better service, AT&T TV might be worth a look.

AT&T TV's bundles start at $49.99 per month. That's a great price, but it comes with some catches. The $49.99-per-month deal only lasts a year. After your first 12 months, things revert to $93 per month. And you'll still be around when the price goes up, because AT&T TV mandates a 24-month contract for its subscribers. There is also a $19.99 activation fee.

If all of this sounds a lot like cable, well, that's by design. While the pricing structure is a clear problem from a cord-cutting perspective, it makes sense if we view AT&T TV as a replacement for cable and satellite rather than as a way to cut the cord.

AT&T TV is very different from most of the streaming services that we review here on Cordcutting.com, and that's something we really need to keep in mind as we wrap up this review.

AT&T TV is designed to replace legacy pay TV without missing a beat. It's not a revolution; it's a new-and-improved take on satellite and cable. In that context, it's a great service. For about the same price as a cable or satellite subscription, AT&T TV users can enjoy a more flexible service that works on mobile devices and stays clear in all kinds of weather.

Our cord-cutting mindset makes it impossible not to knock AT&T TV for some of cable's old flaws, though. AT&T TV has the long-term contracts and even some of the platform limitations that old-school cable and satellite services have. If you want to avoid these, you'll want to look to a skinny bundle like AT&T's own AT&T TV Now.

AT&T TV has a lot to offer the pay TV customer base, but it's not a true cord-cutting service. If you can stomach the price and the long-term contract, it's a wonderfully entertaining service.