There are a lot of products targeting cord cutters and streamers these days, and nowhere does that seem more true than in the media center business space. Over the past few years, we've seen an explosion in media centers, including traditional ones focused on local content and server-client setups that allow viewers to watch on multiple devices.

The latest product generating buzz is MrMC, a singe-device media center with a lot of functionality. Where did this service come from, and how will it try to carve out a niche in a space that already features major players like Plex and Kodi? Here's everything you need to know.

Like any media center, MrMC is there to help you organize your local content and to streamline the user experience. MrMC supports a very wide range of video and audio formats, and it gives users quick ways to access the content through menus that sort content by genres, date added, and other features. 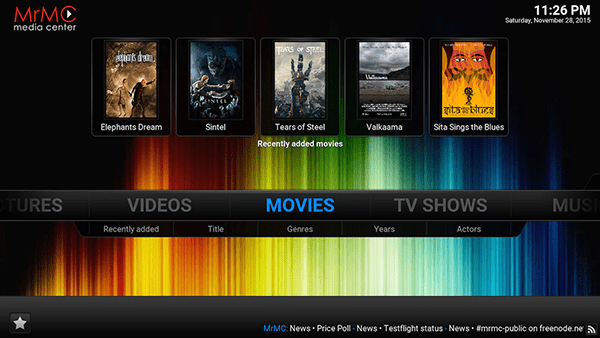 Kodi users will recognize MrMC's interface, which is extremely similar to Kodi's Confluence skin. There's a good reason for that: MrMC is a forked version of Kodi, something we'll touch in in the next chapter.

MrMC is focused on mobile and streaming box devices, with apps available for iOS, Apple TV, and Amazon Fire TV. That makes them the only true Kodi heir available on Amazon Fire TV through the legitimate app store (more on that in the next section).

The focus is definitely on local content here, but MrMC does offer support for IPTV services as well – though not for the many user-created Kodi add-ons that allow live TV streaming.

That's the one very important difference between MrMC and Kodi: user-made add-ons are not available for MrMC. That drastically changes the media center's functionality, cutting off tons of add-ons that allow users to watch live TV, stream movies and TV shows, and more. Of course, not all of these user-generated add-ons are legal, which is the key to understanding why MrMC exists at all.

MrMC is a forked version of Kodi, which means that it started with Kodi's code and then modified it to create a new product. MrMC's heritage goes straight back to Kodi, which is its only direct ancestor. Looking at that heritage, it's pretty easy to see why MrMC's developers thought there was a space in the market for their product.

Kodi has long been the king of open source media centers, but that comes with its own problems. Kodi's user-generated add-ons include plenty of illegal streaming services, which has led to Kodi being banned from a bunch of major app stores. That, in turn, has led to a fight between Kodi itself and its add-ons. Kodi has “blacklisted” a bunch of add-ons and insists that none of its developers are helping those add-ons along. This has all happened relatively recently – first Amazon banned Kodi, and then Kodi suddenly got very concerned about these illegal add-ons.

MrMC doesn't support any user-created add-ons, and thus ducks this whole moral quandary entirely. As a result, they're sitting pretty in the Amazon app store, while Kodi is still fighting to get back in. MrMC is the only Kodi descendent that can claim that honor.

Like its big brother Kodi, MrMC is open source. It also claims to be free on its website, but that's not 100% true. While there's no subscription fee for MrMC, its individual apps do cost money to download. The iOS app is $5.99 and the Amazon app is $5.99 as well.

That compares unfavorably to Kodi's 100% free model, but MrMC is hoping that carving out a niche in app stores that ban Kodi can jump-start its popularity. That may or may not work out – remember, Fire TV owners, you can always just sideload Kodi – but it will be interesting to watch.