When It Comes to Streaming, Monogamy Is Rare! 76% of streaming households have more than one streaming service

The good news: They don’t have to choose just one. In fact, many don’t. Our Cordcutting.com research department examined the streaming habits of more than 1,000 people, and we found that many don’t. In fact, in the world of streaming, monogamy is a very rare thing.

The More the Merrier 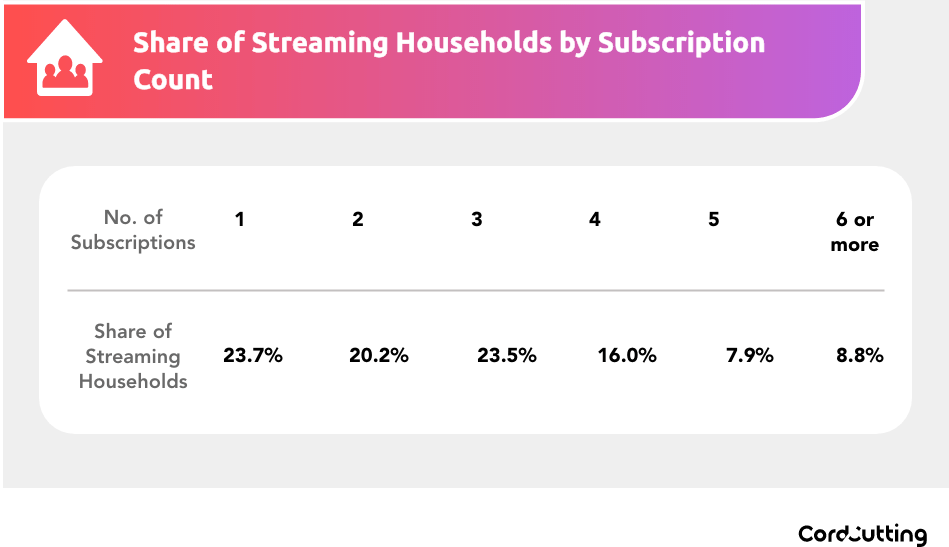 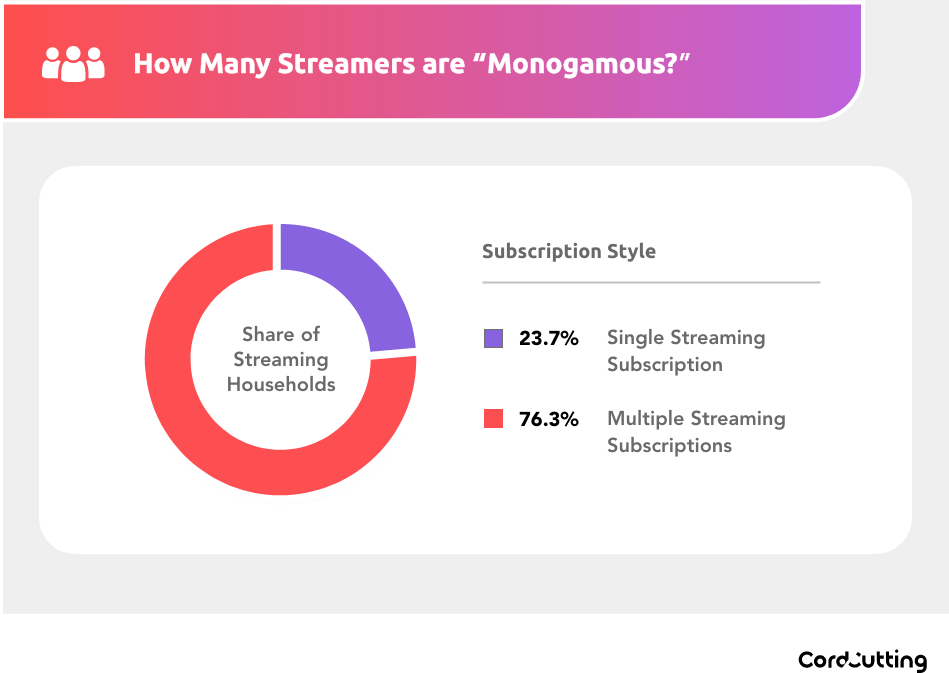 Our analysis didn't find much in the way of a bell curve. As we've established, roughly equal numbers of households have one service, two services, and three services. About half as many as that have four or five, and relatively few have six or more.

Numbers like this suggest that streaming services have a lot of opportunities to court customers, even if those customers already have another service. But not all services are equally represented in these streaming households.

Streaming households that have Netflix are likely to have at least one other streaming service, too. We found Netflix to be far and away the most popular streaming service out there — which is no surprise, and is consistent with our past findings and with outside analysis.

Netflix is also the service that inspires the most streaming monogamy. Among households with just one streaming subscription, more than half are Netflix-only. There are significantly more single-subscription homes with Netflix than there are with the second-place finisher, Amazon Prime Video — and Amazon Prime includes more than just streaming, which should theoretically have given it an advantage. 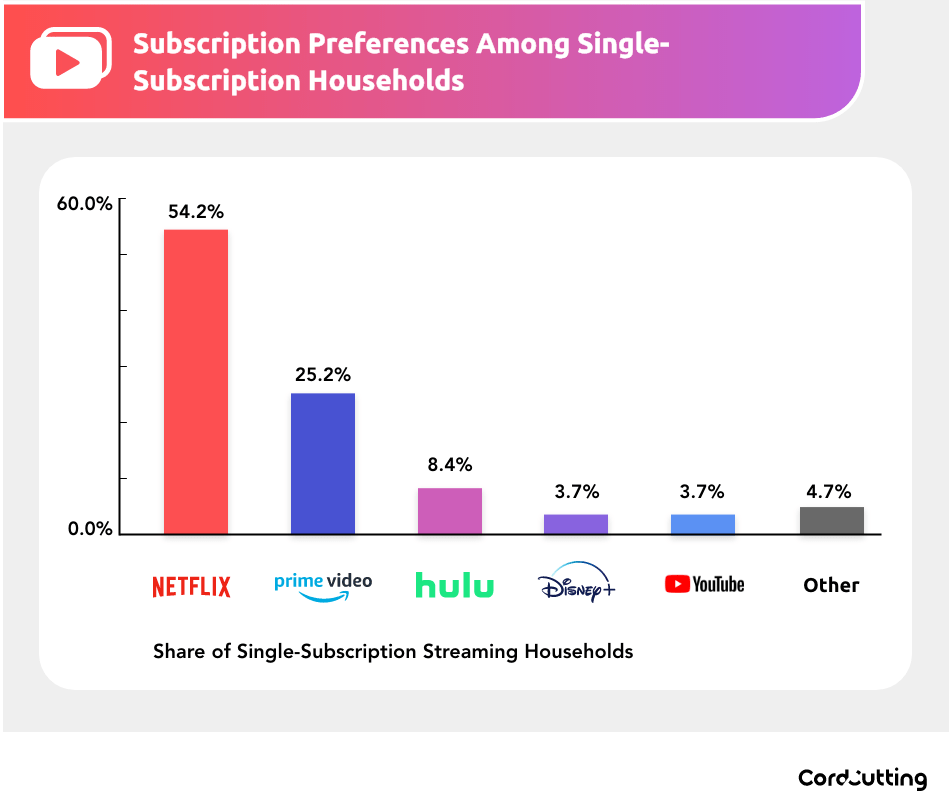 But even Netflix, with its top spot among monogamous streamers, relies heavily on multi-subscription customers. Among households that have Netflix, 84.6% have at least one other streaming service. 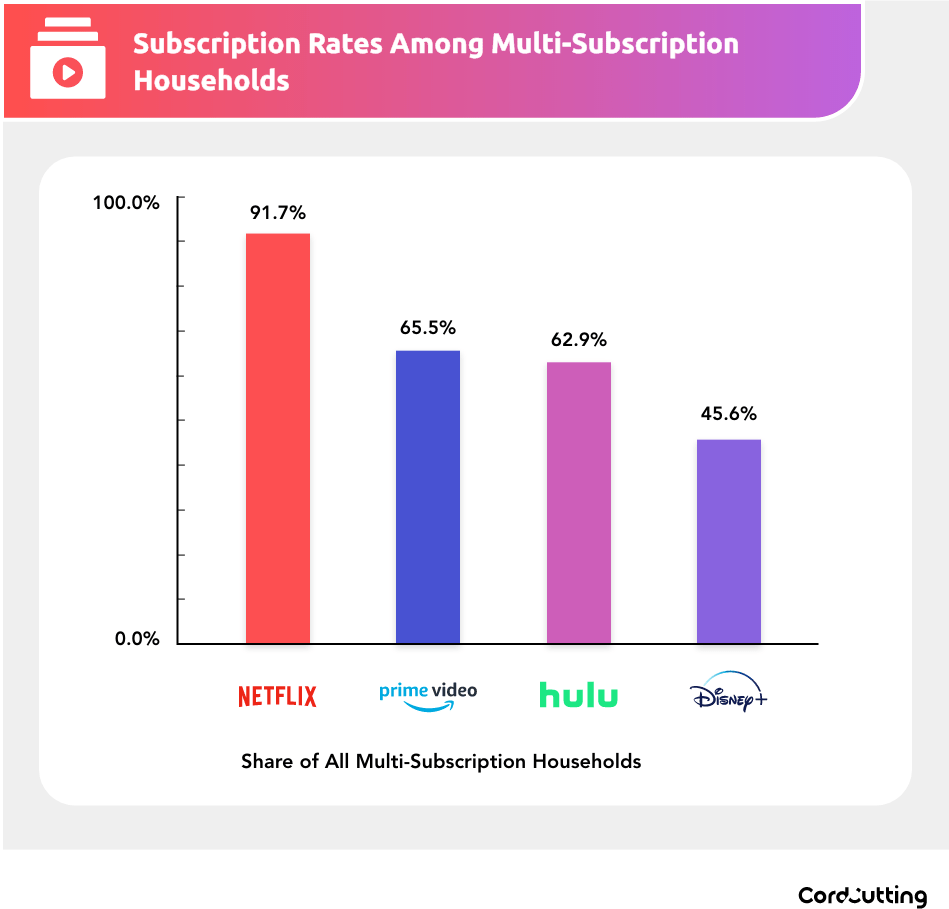 Netflix's ubiquity suggests that services like Hulu and Disney+ are competing to be chosen alongside — rather than instead of — Netflix. While Netflix has a significant, albeit minority, monogamous customer base, Hulu effectively does not. Only 2.0% of single-subscription homes have chosen Hulu. Taking Hulu's perspective, that's 3.9% of its user base, a tiny figure that leaves 96% of Hulu households with at least one other service. 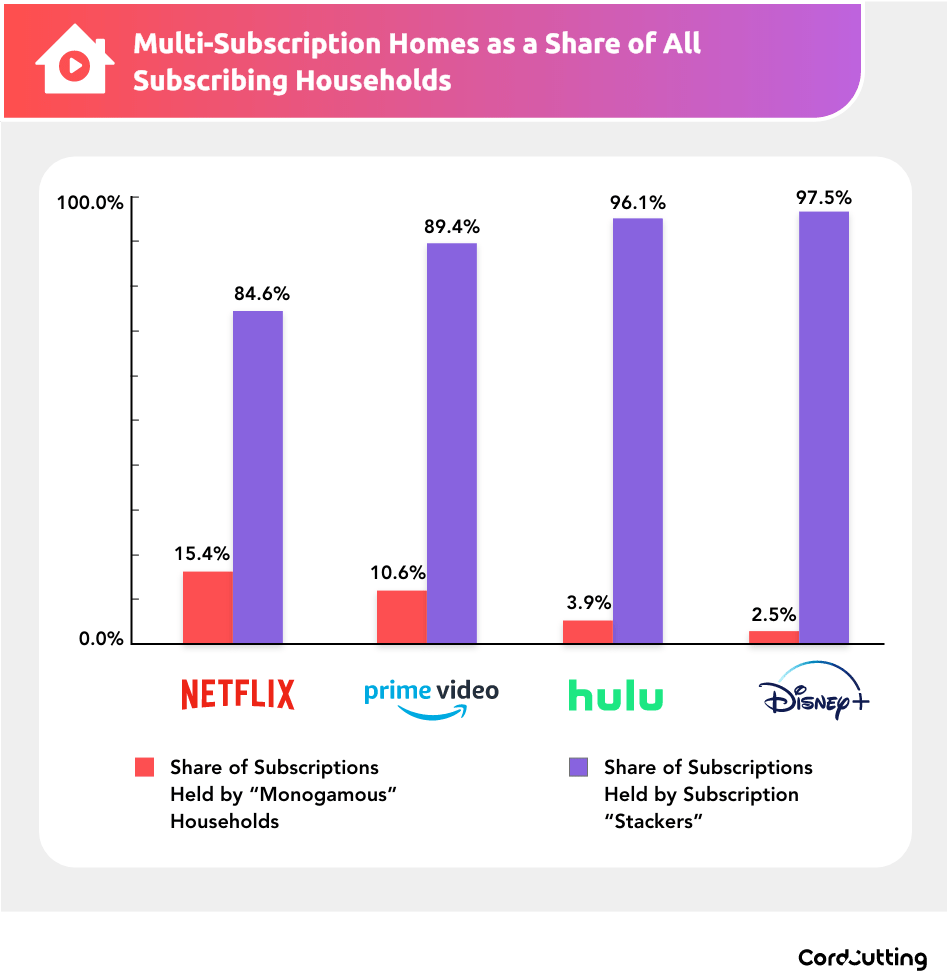 Unsurprisingly, Netflix is everywhere in Hulu households: 89.9% of Hulu’s customers have Netflix. And it’s not just Hulu. Nearly 90 percent (88.3%, to be exact) of Disney+ subscribers also subscribe to Netflix. Among Amazon Prime subscribers, 80.4% are Netflix users, too.

It doesn't go both ways: Disney+ and Amazon users make up 38.2% and 55.0% of Netflix households, respectively (the groups are not mutually exclusive. With Netflix hogging streaming budgets, there’s less overlap between non-Netflix services in multi-subscription households. Among Disney+ subscribers, 61.3% also subscribe to Amazon Prime, and the figure for the reverse relationship is 39.2%. That’s significant, but nowhere near the kind of overlap that each of those services has with Netflix.

The pattern holds with other subscription options. Netflix is almost a given in streaming households, leaving other services to compete for whatever is left over in a given household’s streaming budget.

This isn't to say that there are no correlations between services other than Netflix. Netflix's dominance makes it every other streaming service's biggest digital “roommate” in streaming households, but there are some notable correlations among the smaller services.

As we might expect, Disney's two services — Disney+ and Hulu — have a degree of correlation. Most Disney+ subscribers (66.3% of them) have Hulu, and nearly half of Hulu subscribers (47.4% of them) have Disney+. Nearly a third (31.0%) of multi-subscription households are Disney+/Hulu overlappers (this figure includes households with just those two as well as households with those two and more). For two non-Netflix services, this is a relatively high degree of correlation.

It’s not all good news for Disney’s brand synergy, though. Those Hulu and Disney+ subscribers are almost always fans of Netflix and/or Amazon Prime, too. Households with just these two services and no competitors are little more than a rounding error in our analysis; they form less than 1% of Hulu subscribers and less than 2% of Disney+ subscribers, and are effectively 0% of all multi-subscription households.

Including Disney’s ESPN+ brand doesn’t help. Disney has bundled all three of its services for a discounted price, but very few households appear to be taking Disney up on that offer. Disney's three-service discount bundle saves $5 per month and ESPN+ costs $4.99 per month; households that have the first two without the third are essentially passing on getting ESPN+ for free. Yet we found that ESPN+ was more likely to be missing even in households that already had the other two Disney services. While 31.0% of multi-subscription homes have both Disney+ and Hulu, only about a third of that rough third — 8.0% of all multi-subscription homes — had ESPN+ as well. Homes with Hulu and Disney+ were more than twice as likely to be missing ESPN+ as to have it, despite the fact that it is effectively free to those subscribers.

An “Open Relationship” With Netflix

The good news for ESPN+ and other relatively small-time subscription streaming services is that customers have shown a willingness to branch out and add streaming services. The bad news is that one huge competitor — Netflix — is so omnipresent that it effectively slashes $15 or so off of just about every household streaming budget in the country. Streamers are not monogamous, but they are, apparently, loyal. As the market stands now, Netflix seems to be above the fray, and smaller services seem to be competing with each other rather than coming for the streaming king.

For this research, we surveyed more than 1,000 U.S. adults about their household’s streaming subscriptions. Our survey was conducted online. Our sample is selected and weighted in order to best reflect the demographics of the nation at large.