The world of cord cutting is changing so fast that it's sometimes difficult to keep up with all of the new products and services on the scene. That's why we take the time to introduce our readers to services (both new and old) that they may not be familiar with. In the past, we've talked about Emby, Kodi, Plex, and more. This time around, we're looking at the media center app PlayOn. 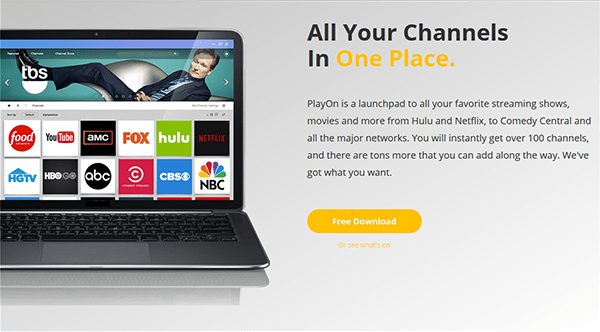 So what is PlayOn? At its core, PlayOn is a media center application. Its stated goal is to get all of your content into one app, so that you can seamlessly navigate between Netflix, Hulu, and other services. Like Plex and Emby, it runs with a server-client setup. Unlike those apps, it focuses a little more on its channels than on local content.

If that “organizing your streaming apps” part sounds a little bit like what you can do with the Roku or Amazon Fire TV operating system, that's because it is. PlayOn is certainly aware of this, and they quickly address in their FAQ by listing a bunch of perks. We'll get to those specific perks in a couple of sections.

PlayOn's channels don't just include subscription streaming services like Netflix and Hulu. It also has channels for networks like FOX and AMC, which offer streaming episodes. These are, for the most part, episodes that already stream online for free. The idea of PlayOn is that it makes it easier to access these free episodes through a single app.

PlayOn also lets you make local media available everywhere, in a way that's similar to Plex. It's a server setup, and that's important –  you'll need to have the app running (on a Windows PC – no Macs allowed) in order to access it from mobile devices and other platforms.

PlayOn is interesting in part because – unlike Roku – it's not an operating system. It's an app, which means that you can have your content organized in a similar way on multiple devices (even if those devices aren't running the same operating system).

PlayOn doesn't work on Macs, but it has pretty robust platform support other than that. You'll notice a few media center operating systems (like Roku) and apps (like Kodi) up on the list. PlayOn is still useful within the framework of these systems because of its fuller libraries (for instance, PlayOn assembles all streaming episodes from PBS.com, whereas PBS's regular Roku app only has a fraction of those) and because of its perks – which brings us to our next section.

The Perks of PlayOn

PlayOn is multi-platform, but it's more than just a Roku OS for multiple devices or a Plex clone. It brings some unique perks to the table.

For one, you can mark and record shows through the PlayOn interface, making it sort of like a DVR for the cord cutting set. In the world of on-demand streaming content, “recording” essentially just means downloading the content for viewing online.

PlayOn also lets you skip ads on certain services. That perk, which is appropriately branded as “AdSkip,” is another interesting example of the way in which PlayOn seems to be blurring the line between platforms and the services they provide access to.

Like a lot of media center applications (including media server apps Plex and Emby), PlayOn offers both a free and a paid version. The paid version is called “PlayOn Plus,” and it's a subscription program that goes for $29.99/year. You can also sign up for a lifetime ($49.99).

Where Does PlayOn Fit Into the Media Center App Scene?

PlayOn is certainly not alone in the media center application market. It competes with a small army of other applications, including Kodi, Plex, and Emby.

PlayOn has competitors, but it also has a promising niche. The ability to skip ads and record content offer an intriguing view into the future of cord cutting platforms. Read our full PlayOn review here.

One thought on “PlayOn”