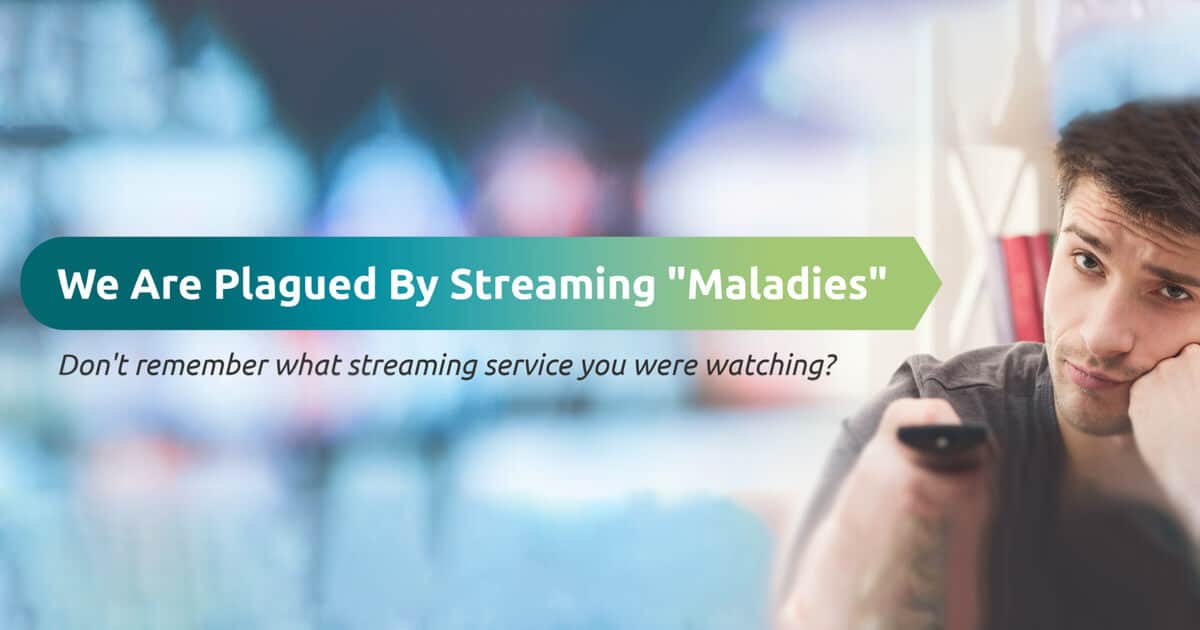 When streaming services like Netflix arrived on the home entertainment scene, they were cures for what ailed us. Netflix was the remedy for our entertainment deficits; it was the perfect treatment for incomplete DVD collections, boring train and plane rights, and the relative lack of innovative TV back in the 2000s. But with these new treatments have come new ailments.

That’s why our Cordcutting.com research department set out to define and diagnose some of the most common streaming maladies out there, from “Streamnesia” (forgetting which service has your favorite show) to “spoiler poisoning” (when someone gives away the ending of a streaming show or movie). Our findings: Streaming sicknesses are as typical as the common cold. Want to know more? Be “patient” with us, and we'll lay out the disorders in order below.

You’re ready to watch a show, and so you fire up your connected TV or mobile device. But then you pause — which streaming app are you going to open? You can’t remember which one had your show.

Sound familiar? You’re not alone. Streamnesia — forgetting which streaming service has your show — is all too common. In our sample, it was reported by 66.2% of respondents. Though some were lucky enough to experience it only “rarely,” 42.5% of all respondents felt the impact of Streamnesia “sometimes,” “most of the time,” or “always.” 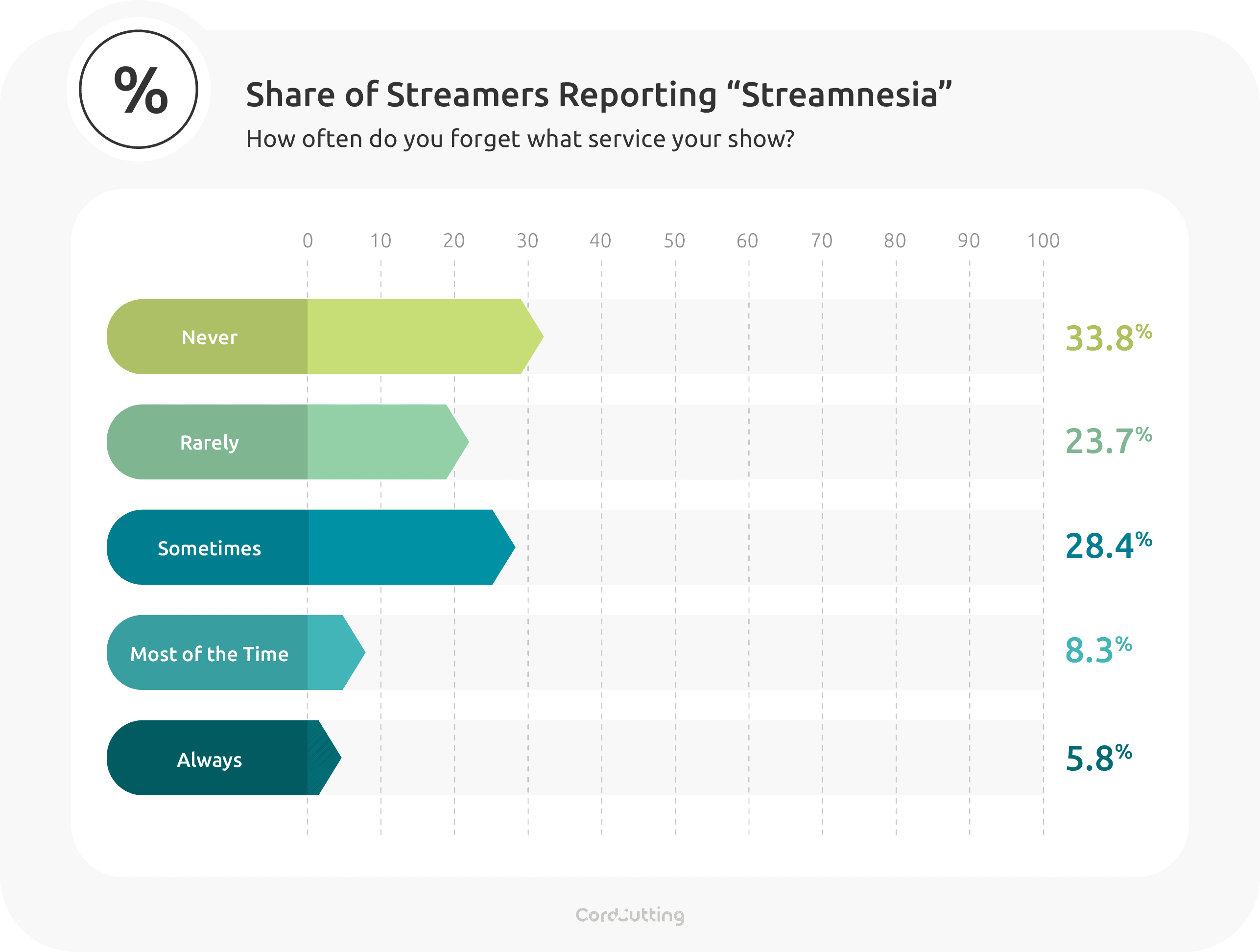 And Streamnesia isn't the only streaming illness that involves memory issues. There's also the classic problem of forgetting your password, which we call a “Password Protection Infection.” And if you find your show, but can't remember which episode you're on? Well, that's “Episode Order Disorder,” of course.

And all of these streaming ailments are very common. An 83.5% supermajority of streamers in our sample reporting sufferings from at least one of these debilitating illnesses. 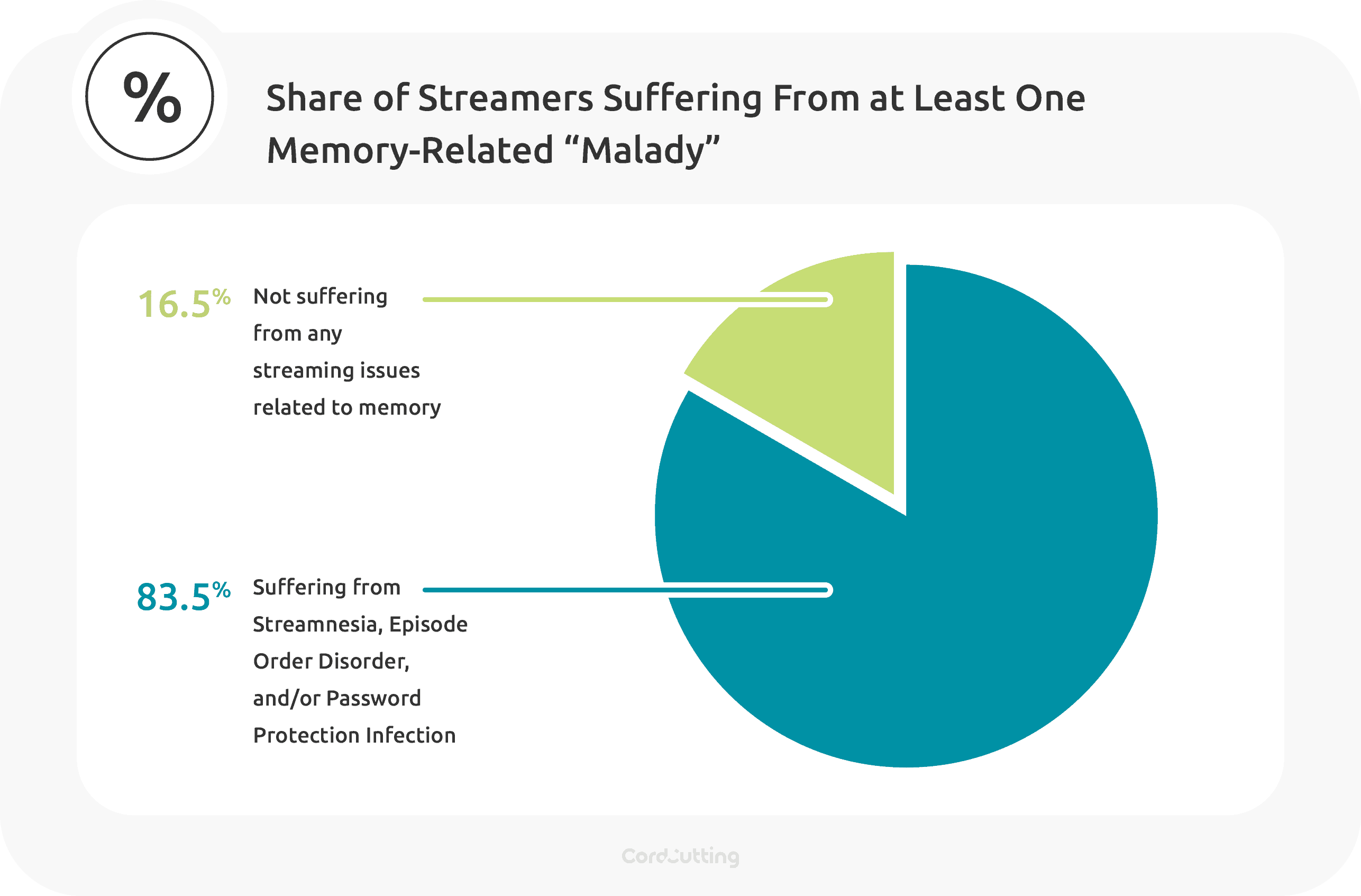 The most common of these memory maladies is Episode Order Disorder, which affects 68.2% of streamers — slightly more than were impacted by Streamnesia (though Streamesia patients reported dealing with their affliction more frequently).

“Take Too Many and Call Me In the Morning”

Memory issues are incredibly common among streamers. They're also very understandable. After all, there are a lot of streaming services out there! Since Netflix kicked things off in 2007, new streaming services have been popping up every year — or even every few months, as has been the case recently. Netflix has been joined by competitors like Hulu, Disney+, Apple TV+, and HBO Max, to name just a few.

Maybe that's why 60.2% of streamers report being frustrated in their attempts to recommend shows or movies to friends. Trying to share their tips, these streamers found that they couldn't

remember which service had the show they were talking about! These poor souls found that they suffered a “Suggestion Sprain” — yet another one of streaming’s memory maladies.

Streamers can be in danger even when they're not trying to recall a specific show, streaming service, or episode. Overwhelming choice can leave streamings with a paralyzing illness known as “Service Selection Sickness.” Symptoms of Service Selection Sickness include reporting the feeling of being “overwhelmed by too many channel and streaming choices,” as 62.4% of our study's sample did. 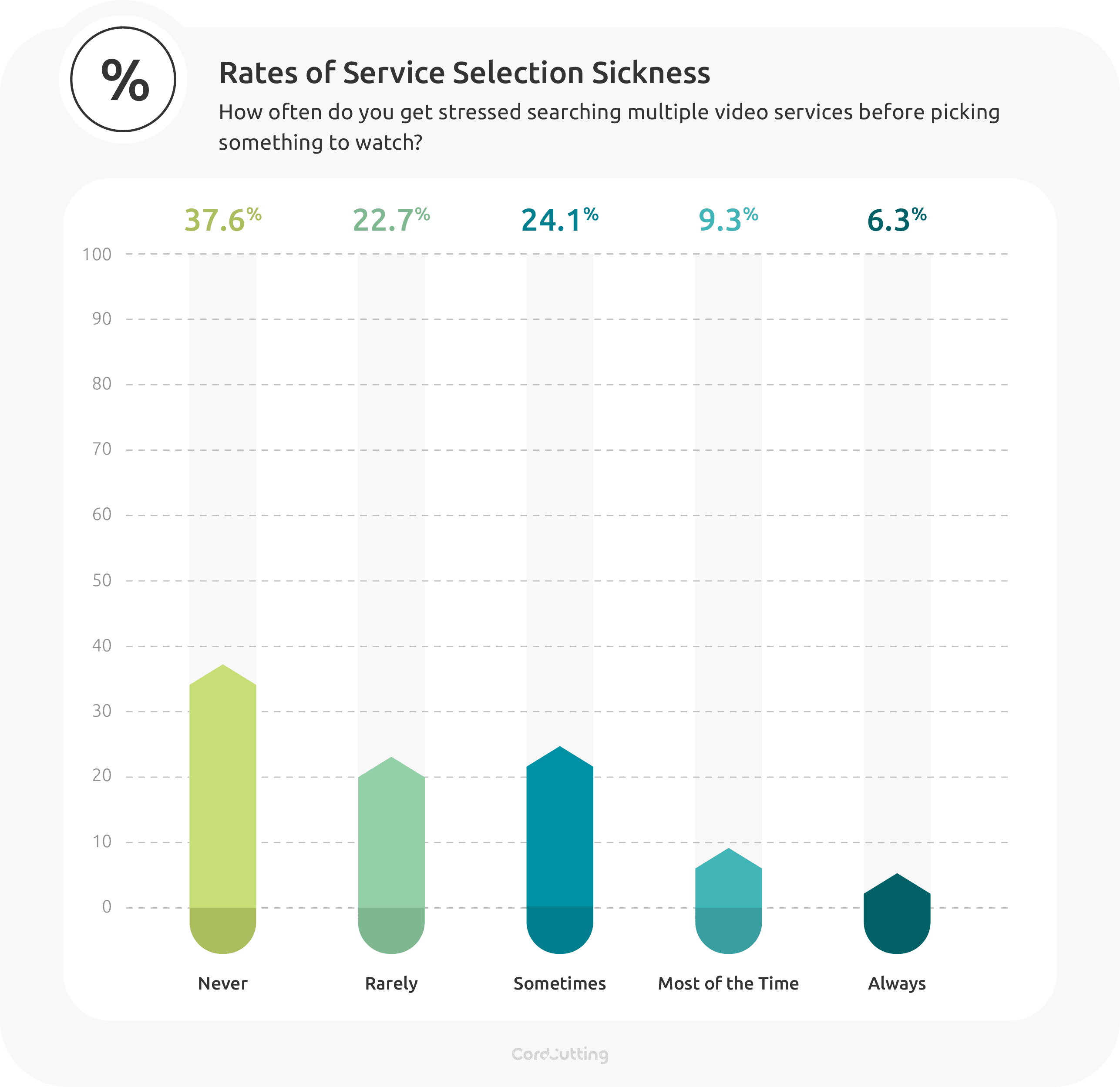 Some patients overcome their Service Selection Sickness by simply choosing one service and diving in. But others end up trapped, moving from service to service in their search for the perfect TV show or movie. They are suffering from a separate, albeit related, illness: A “Decision Deficiency,” a diagnosis that is appropriate when a patient gets stressed searching multiple video services before picking something to watch.

Decision Deficiencies are tragically common, and they claim countless hours of free time every day. Though streaming services are fighting this terrible blight with aggressive algorithms,

auto-play features, and other techniques designed to get users to “just watch,” Decision Deficiency remains a problem for more than half (57.5%) of all streamers.

Streaming services and shows aren't the only things confusing streamers. Streamers also report having some issues with their home entertainment setup — specifically, with the remote controls they use. It's very common for streamers to lose track of which remote control to use when and

where, or to mix up the buttons on a given remote. These controller challenges are consistent with a “Controller Complexity Complex” diagnosis, an affliction that is faced by 45.9% of the streaming public.

If only all of our problems were the fault of technology. Unfortunately, our fellow human beings can make us feel downright ill, too. If another person reveals huge spoilers and ruins the ending of your favorite show or movie, you could be left feeling just sick about it. That awful feeling is “Spoiler Poisoning,” and it's a stomach-churning feeling that 74.0% of streamers are familiar with.

In fact, Spoiler Poisoning is the most common of all streaming maladies. More respondents reported suffering from Spoiler Poisoning (including those who dealt with it “rarely,” “sometimes,” “most of the time,” or “always”) than did so for any other streaming affliction. 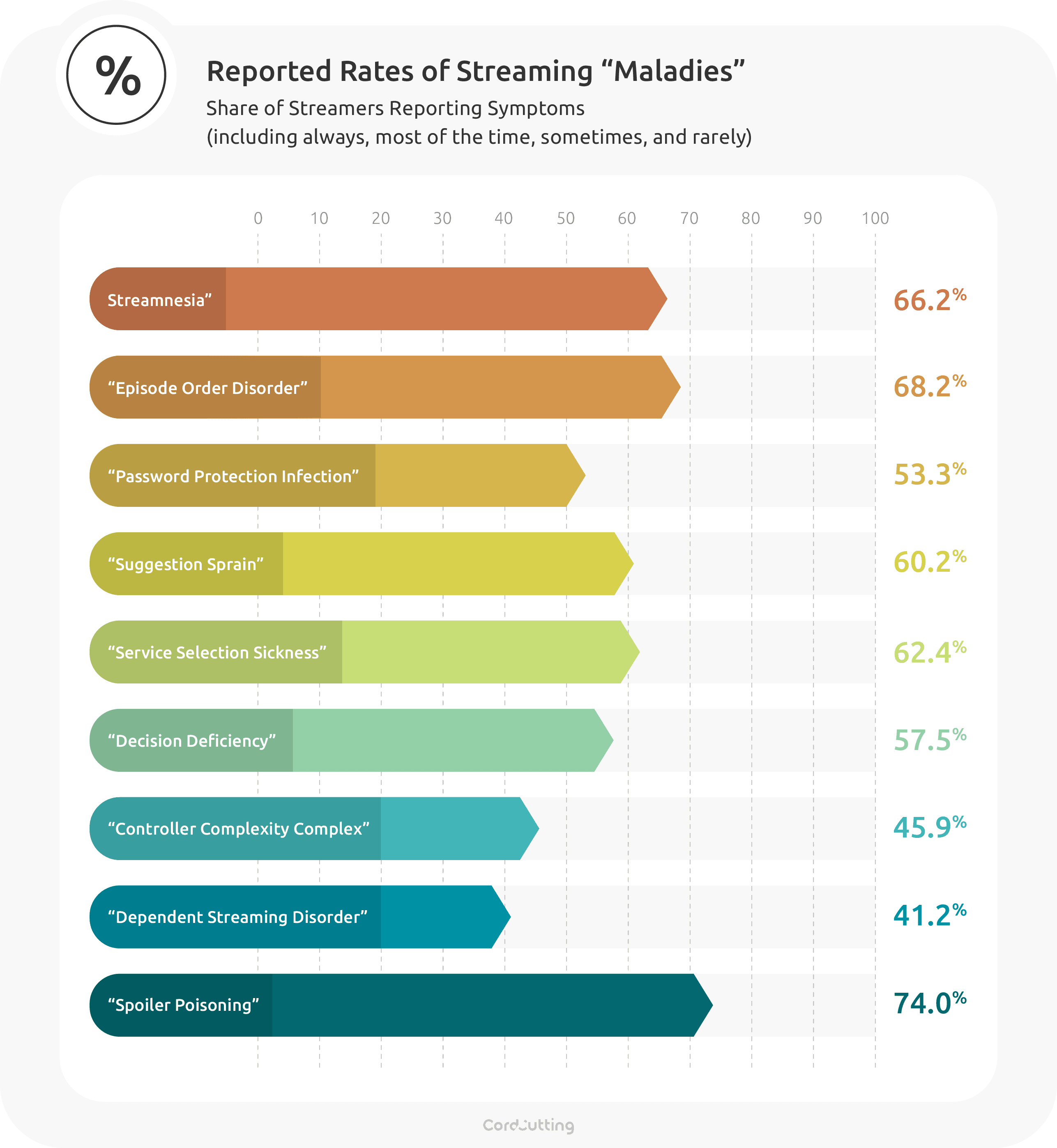 Fortunately, the long-term effects of these streaming maladies are relatively mild. All of the illnesses we’ve discovered are beatable with the right treatment and a positive attitude. We recommend reflecting on the many benefits of cord cutting, then getting plenty of rest while streaming your favorite show on your favorite streaming service. Get well soon!

For this research, we surveyed 500 U.S. adults about their experiences using streaming services. Our survey was conducted online. Our sample is selected and weighted in order to best reflect the demographics of the nation at large.