Political pundits have observed that left-leaning and right-leaning voters live in their own “media bubbles” for news and political opinion shows. Is this true, and how much does it extend to other forms of televised entertainment, from sports to comedy to drama?

In the midst of a highly divisive election season, CordCutting.com Research set out to find out how our two-party nation is spending its screen time. We examined the viewing habits of more than 700 Americans and mapped our results against those same Americans’ political preferences — including their party identification and the candidate they’re voting for in 2020.

Is There a Streaming Divide Between Trump and Biden Supporters?

Our sample showed levels of popularity for Netflix, Hulu, and other subscription services that were consistent with prior studies from CordCutting.com and others. But it also showed a partisan gap: Republicans and those who will cast their vote for Donald Trump are slightly less likely than Democrats and Biden supporters to subscribe to Netflix. The same is true for Hulu, Amazon Prime Video, Disney+, and CBS All Access. 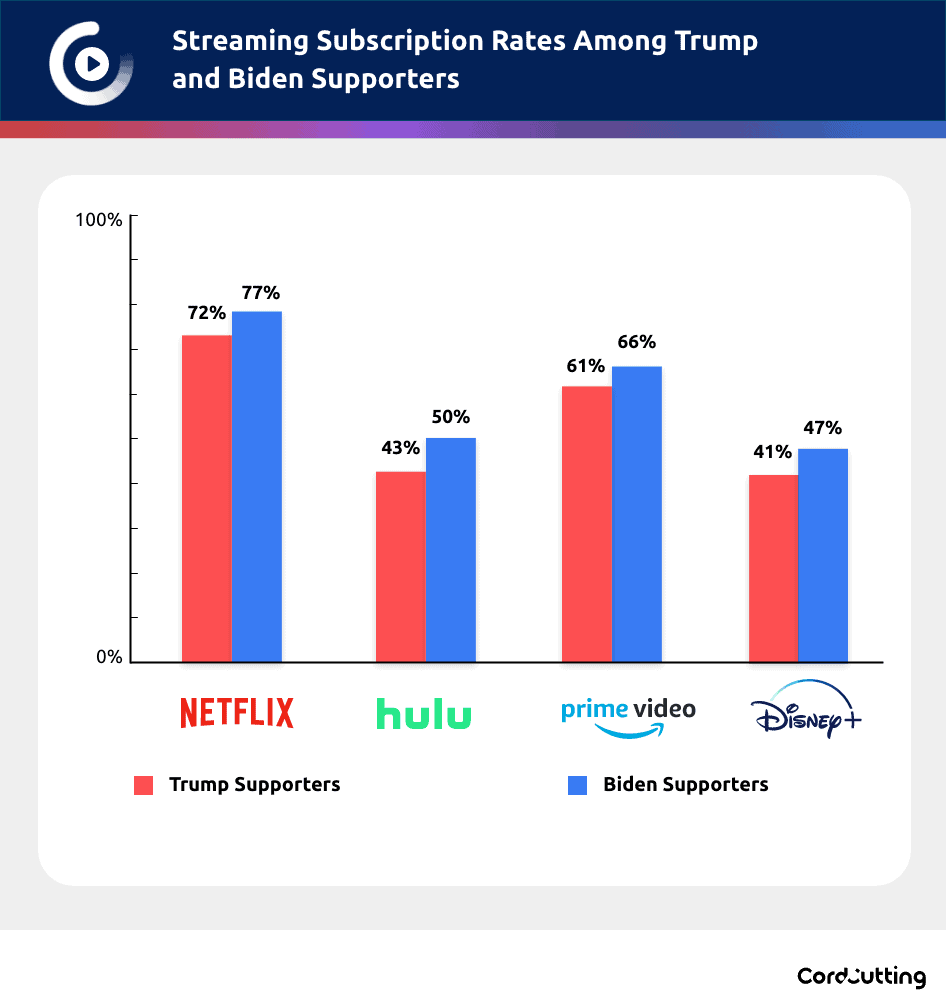 Why? It's not that liberals and/or Biden supporters have more expendable income. Trump’s base includes plenty of wealthy folks (and always has, even as far back as the 2016 primary). Trump failed to carry the low-income vote in 2016, and will almost certainly trail Biden in the same category in 2020.

A better explanation may be the broadband gap. Trump’s support trends more rural than Biden’s, and gaps in broadband infrastructure are a rural issue. Areas without the proper internet infrastructure for reliable streaming are almost certain to be areas where Trump is expected to outperform Biden.

What Shows Trump and Biden Voters Approve Of

The president’s approval rating is no secret. It’s also a highly partisan thing: Republicans and those who plan to vote for Trump overwhelmingly approve of the president, while democrats and Biden fans do not. No surprises there, of course — but in our highly politicized environment, it’s not just the president who is viewed through a partisan lens.

So maybe it’s no surprise that Biden voters were twice as likely as Trump voters to approve of The Handmaid’s Tale. 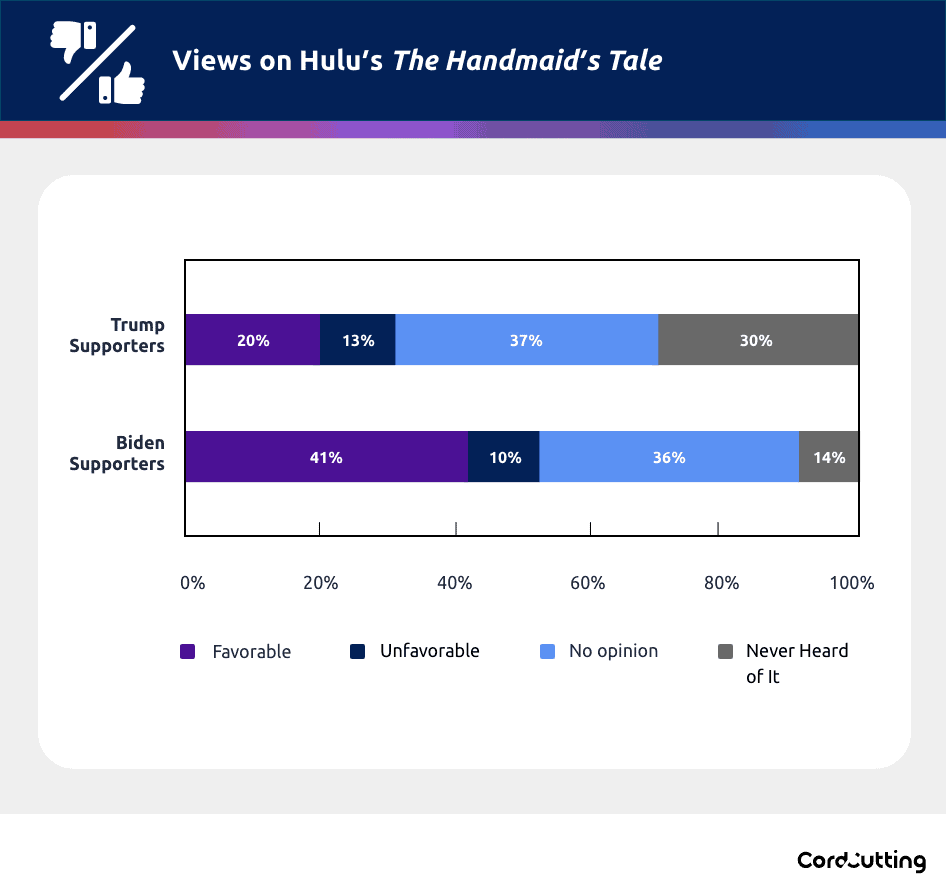 A similar pattern played out with Saturday Night Live (SNL), which Biden supporters are far more likely to approve of than those for Trump. In the case of SNL, Trump voters had an equally strong opinion in the opposite direction: Nearly 40 percent of Trump supporters disapprove of SNL, compared to only eight percent of Biden voters (and 100 percent of sitting presidents, of course). 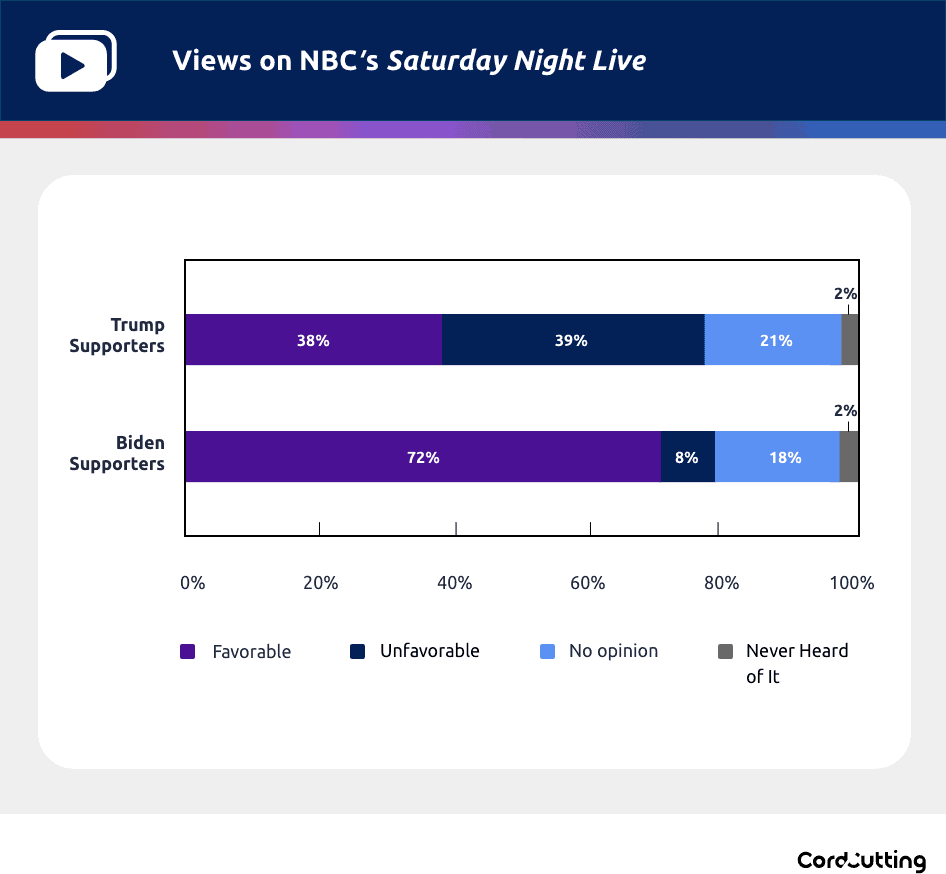 Trump voters were also more likely to disapprove of RuPaul’s Drag Race (35.8 percent disapproval) and Queer Eye (35 percent disapproval), both of which have strong LGBTQ+ themes. The daytime talk show Ellen, recently scandalized by reports of its toxic work culture, suffered rough favorability numbers across the board but proved a tougher sell for Trump voters: Half of all Trump supporters had an unfavorable view of the show, compared to a little more than a quarter of Biden supporters. 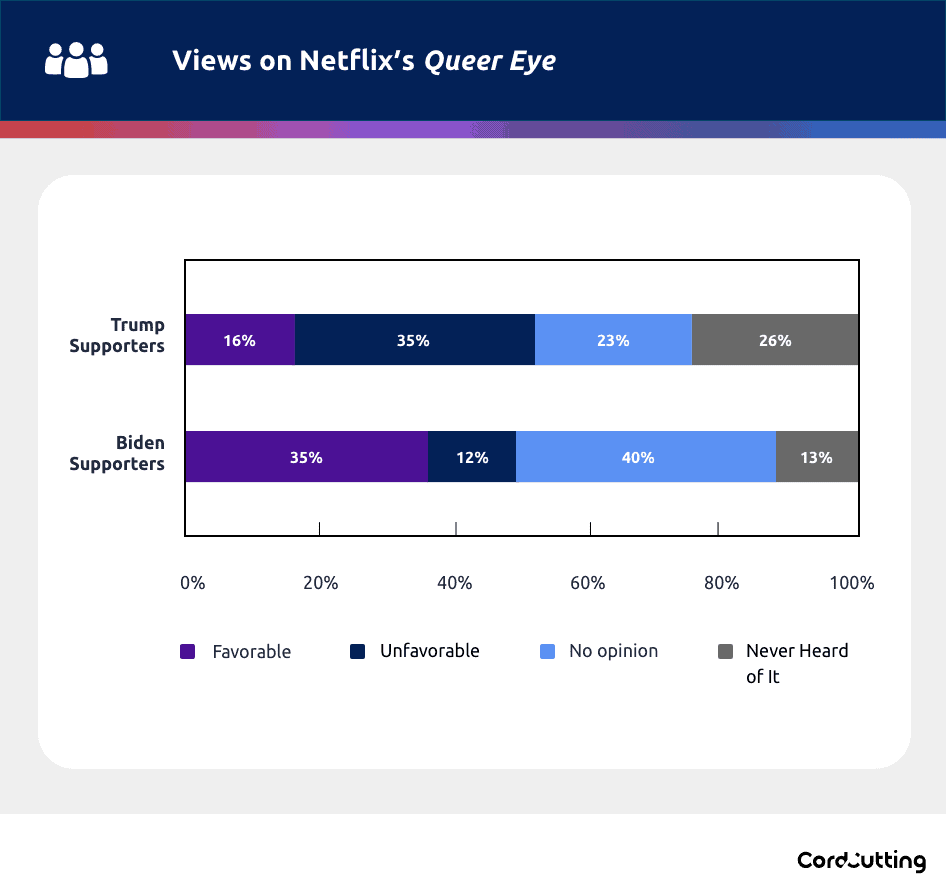 If you’re looking for a sign of unity in our divided nation, look no further than Love Island — it was the most-loathed show overall and drew significant disapproval from both sides of the aisle (24.5 and 29.9 percent disapproval from Trump and Biden supporters, respectively).

In sports fandom, a familiar pattern played out. Once again, solid majorities of both Trump and Biden voters either approved of or expressed no opinion on the topic at hand. And, once again, the minority that disapproved was much more significant in the Trump supporter camp.

Trump voters were more likely than Biden voters to not approve of women's sports, too — including the WNBA and women's tennis, both of which have seen high-profile social justice protests in recent months. 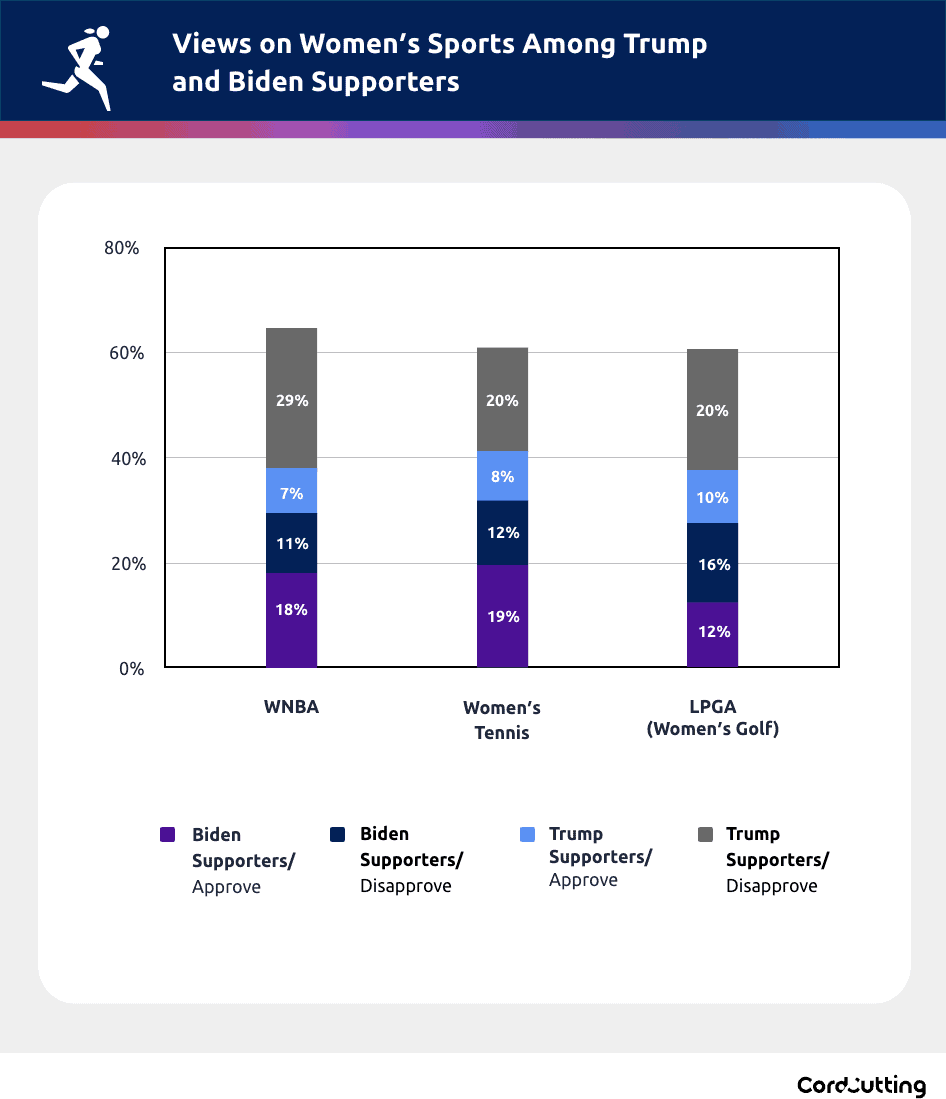 Trump Supporters Have a More Unfavorable View of Netflix

Netflix is widely used across partisan lines. We found a small gap in subscribership consistent with the (quite small) gap in overall streaming subscriptions between Trump and Biden voters. In other words, there’s not much to suggest that partisanship has an effect on Netflix consumption. 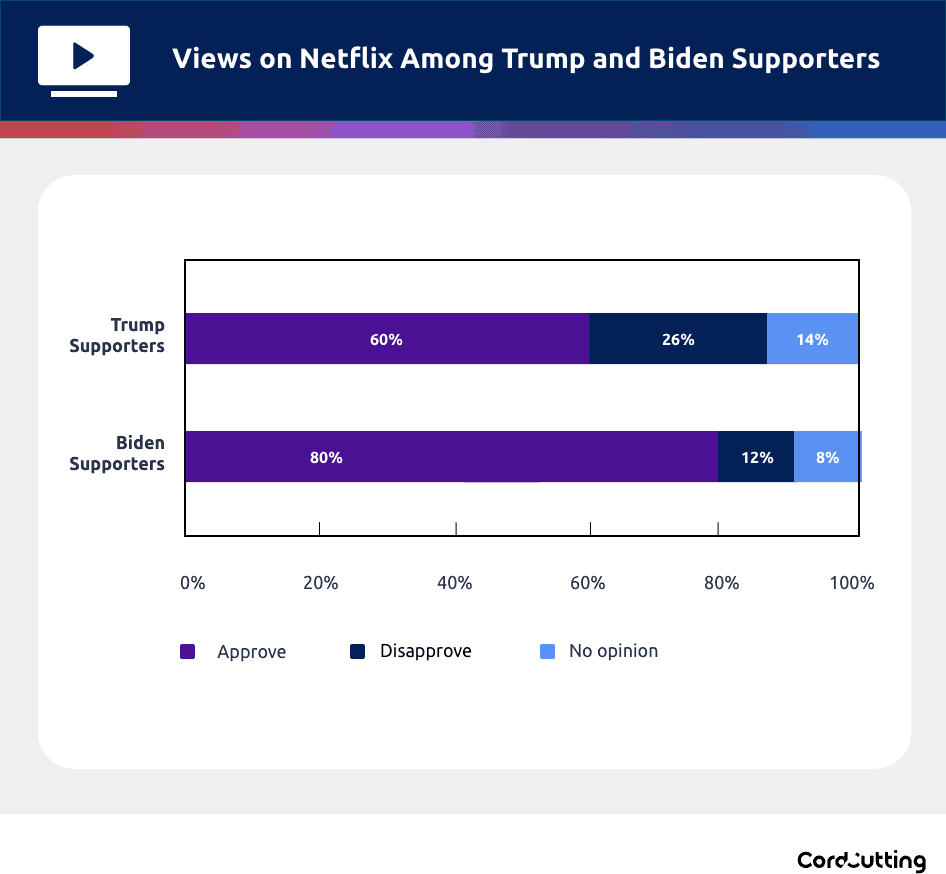 Why? “Netflix is now a pornographer,” one Trump supporter told us, in apparent references to the controversy surrounding the Netflix film Cuties. Another Trump supporter was more explicit: “Because of the movie ‘Cuties,'” they explained. Yet another said that Netflix was one of three streaming companies that “condone Pedo [sic] stuff;” Disney+ and CBS All Access were the others.

Only a little more than 13 percent of Trump voters had an unfavorable view of Disney+, an only slightly larger figure than among Biden fans. But the reasoning given by Trump supporters tended to be more partisan. “I don't like the liberal agendy [sic] of their new stuff,” one respondent told us. Several connected Disney+ to the Chinese government, with one respondent saying Disney was “in bed with China” and another saying “Disney supports the CCP [Chinese Communist Party].”

For this research, we surveyed more than 700 U.S. adults about their streaming and TV viewing habits, opinions on sports, and political views. Our survey was conducted online. Our sample is selected and weighted in order to best reflect the demographics of the nation at large.