With streaming wars raging and cable costs rising in an economy racked by inflation, complicated entertainment choices have become critical and confusing for customers. Cable and satellite TV packages provide endless channel options, but how many channels do users actually watch and are these subscriptions a good value compared to streaming services?

To meet our mission of monitoring media trends, CordCutting.com recently conducted a study of loyal cable TV patrons about their subscription bundles and viewing habits. We found that the digital landscape has dramatically changed since our 2019 research, and so have public opinions.

The State of Play for Cable TV

CordCutting.com was an early proponent of TV without cable, and public practice has gradually followed suit. The share of Americans watching cable or satellite TV plunged by more than 20 percentage points from 2015 to 2021, with another 4.7 million households cutting the cord in 2021 alone.

Meanwhile, streaming continues to soar in 2022. Though Netflix recently logged a rare quarterly loss of subscribers, the industry is up as a whole: spending on streaming grew 20 percent in 2021.

The Cost of Cable TV

In the early 1990s, Bruce Springsteen famously sang that cable television provided “57 Channels (And Nothin' On).” Since those days, TV programming and viewing platforms have increased exponentially.

Today, the average number of channels in a cable or satellite TV package is 190. That number is similar to our 2019 research, but bundle prices have skyrocketed since. 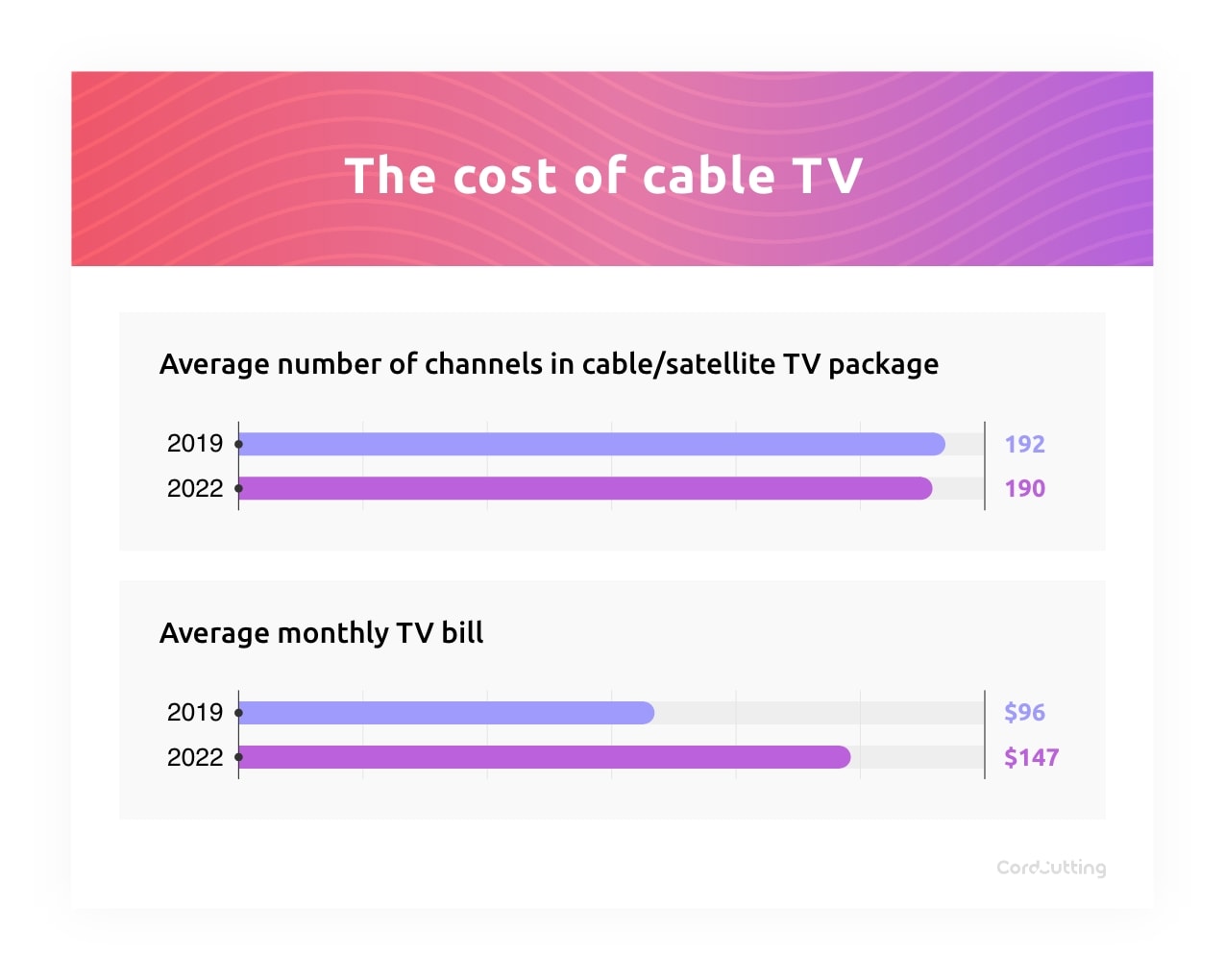 The average TV bill jumped 52 percent in the past three years, with the price per channel rising from $.50 to $.77 – whether or not customers tuned in. Worse yet, we found that most of those channels went unwatched.

What Cable Customers are Watching

Nearly 200 channels may sound like a windfall, but only if viewers are watching.

More than one in three traditional TV customers weren’t even certain how many channels come with their plans – a sign that bloated lineups can be overwhelming.

Despite the impressive programming volume, less than half of cable or satellite TV customers are satisfied with the variety and number of channels in their packages. This disappointment is evident in their viewing habits. 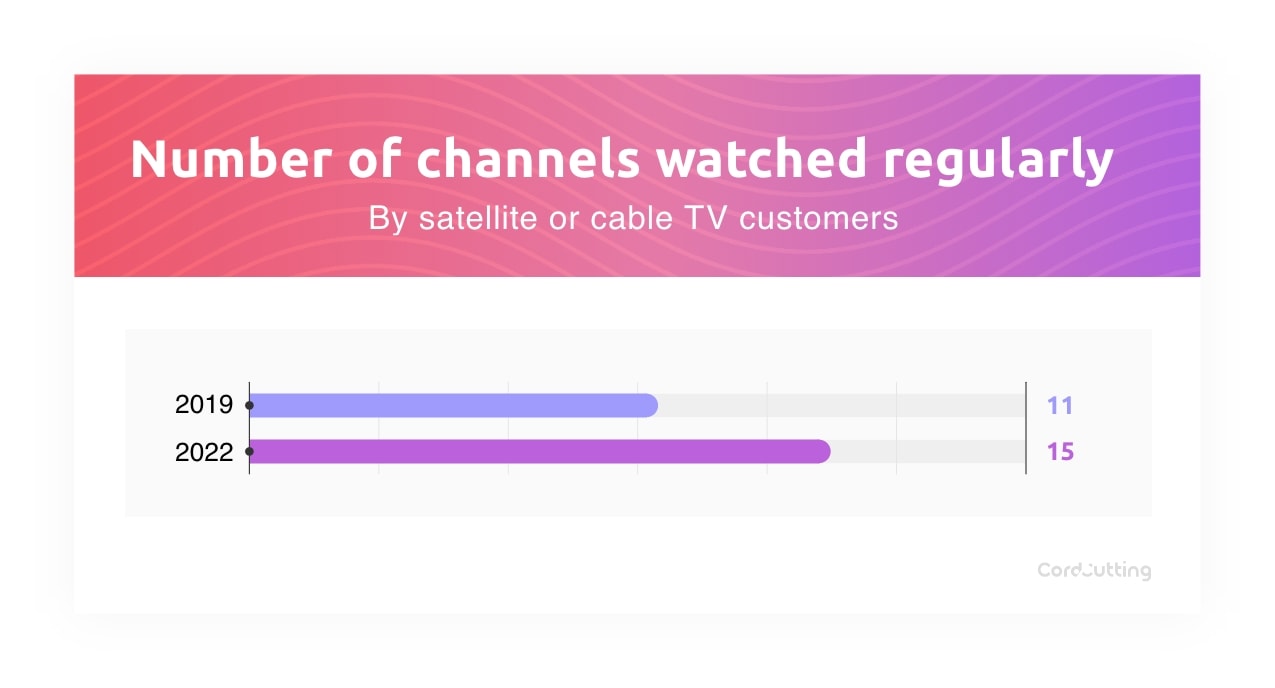 Out of an average of 190 channels, we found that the typical American cable or satellite TV subscriber watches only 15 channels regularly. This number is slightly higher than in 2019, when the average was 11.

By paying $147 per month to watch only 15 channels, the average pay-TV customer shells out $9.57 per channel watched – an amount that rivals the monthly cost of most streaming services.

That per-channel price is even higher for the many viewers who watch fewer stations. Less than 50 percent of pay-TV subscribers regularly watch more than 10 channels, and less than a quarter regularly watched 20 or more channels in their subscription. 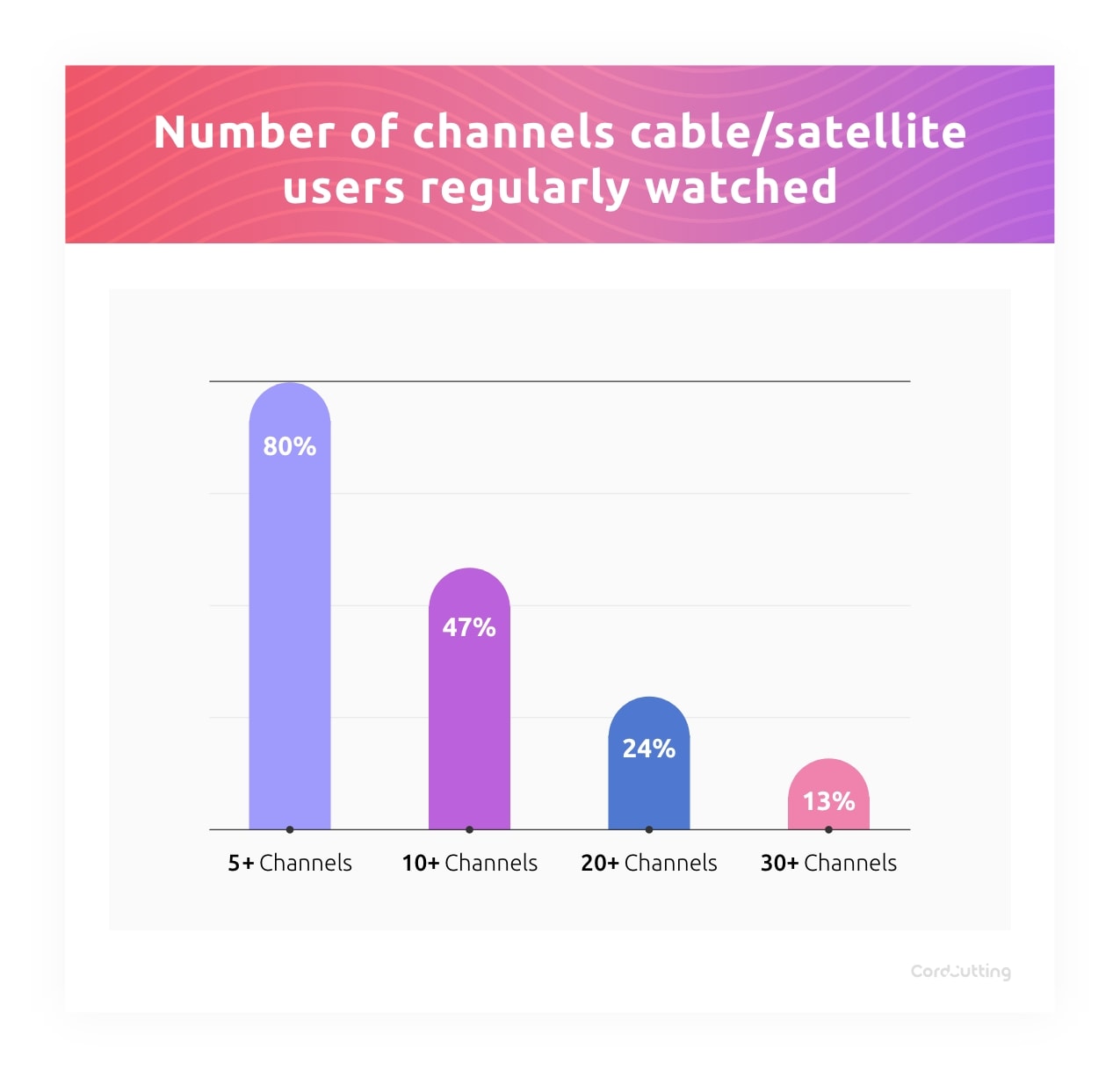 Content tastes have also changed since our last survey. In 2019, all four major networks, which can be viewed for free with an antenna, were listed as top five stations by men and women alike. This year, only two of those networks (ABC and NBC) ranked in the top five regularly watched channels. 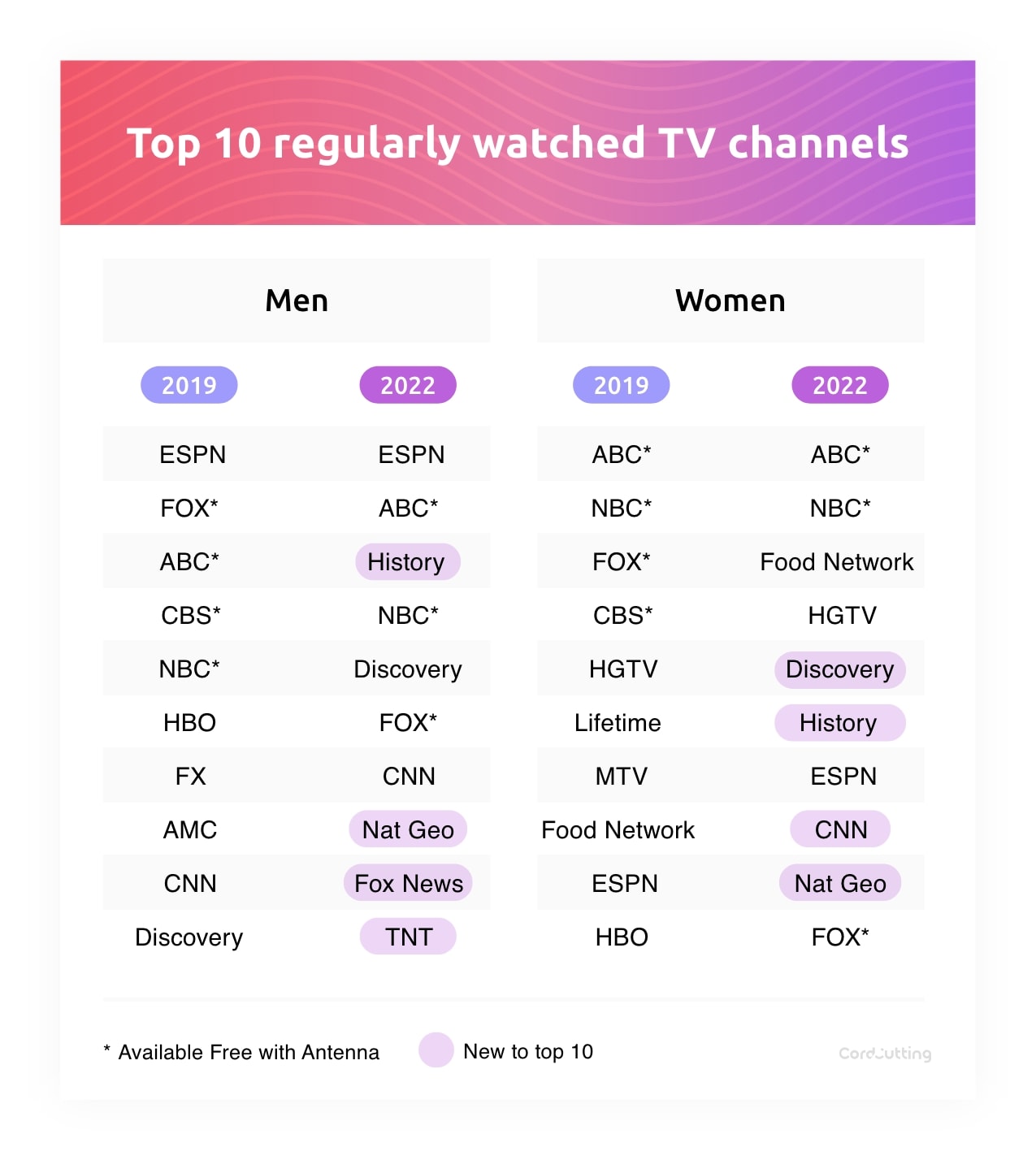 Favorite channel selections remained largely consistent across generations, though Baby Boomers chose HGTV and MSNBC more regularly than Gen X and Millennials, who each ranked ESPN, F/X, and AMC higher than their elders.

How Much Money are Customers Wasting?

Beyond the frustration of flipping through uninteresting channels, disappointing TV packages take a big bite out of budgets. As the average cable/satellite customer regularly watches only eight percent of available channels, they essentially waste $135 every month. Over the course of a year, that adds up to more than $1,600 paid for unwatched stations – a significant increase since 2019. 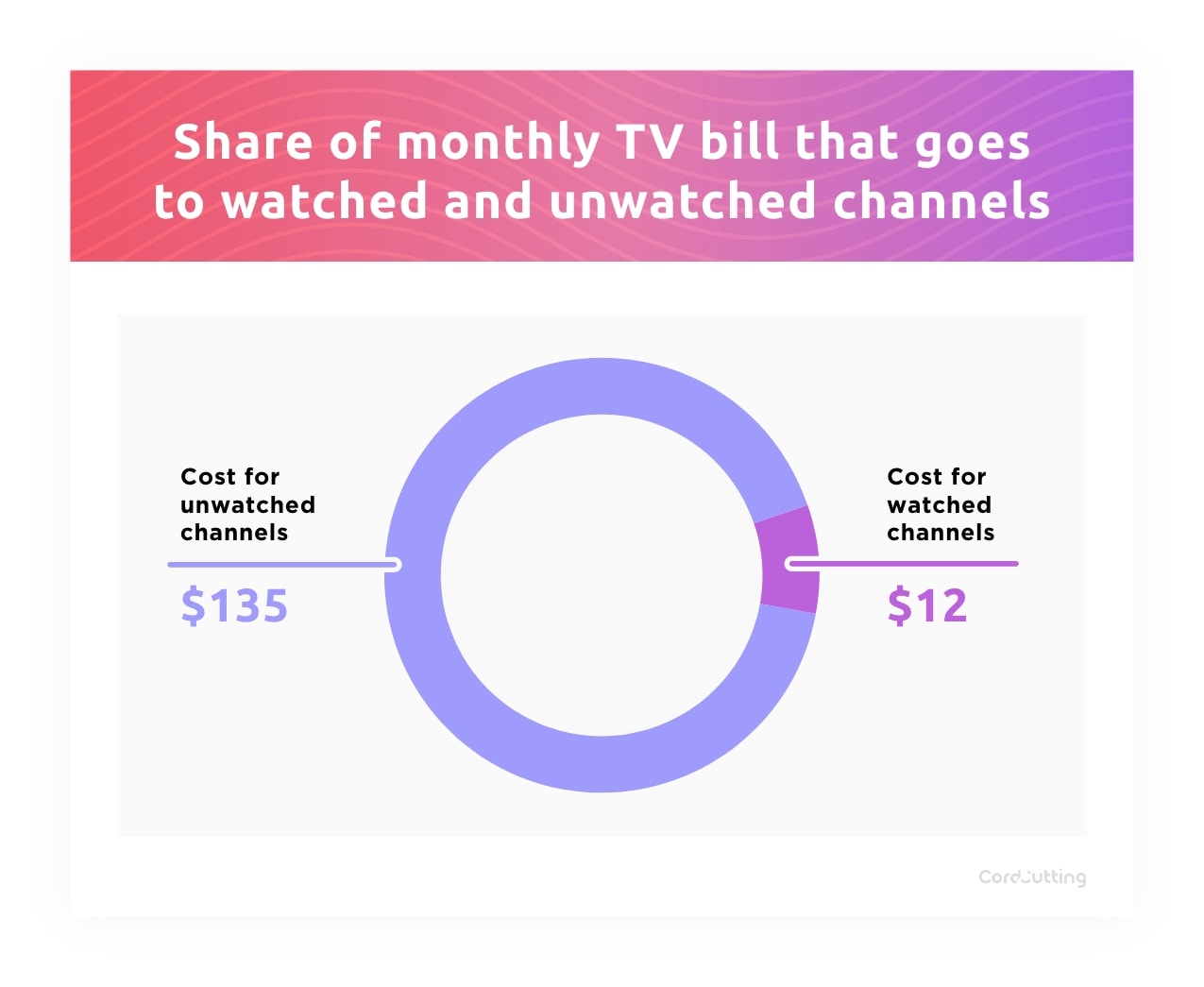 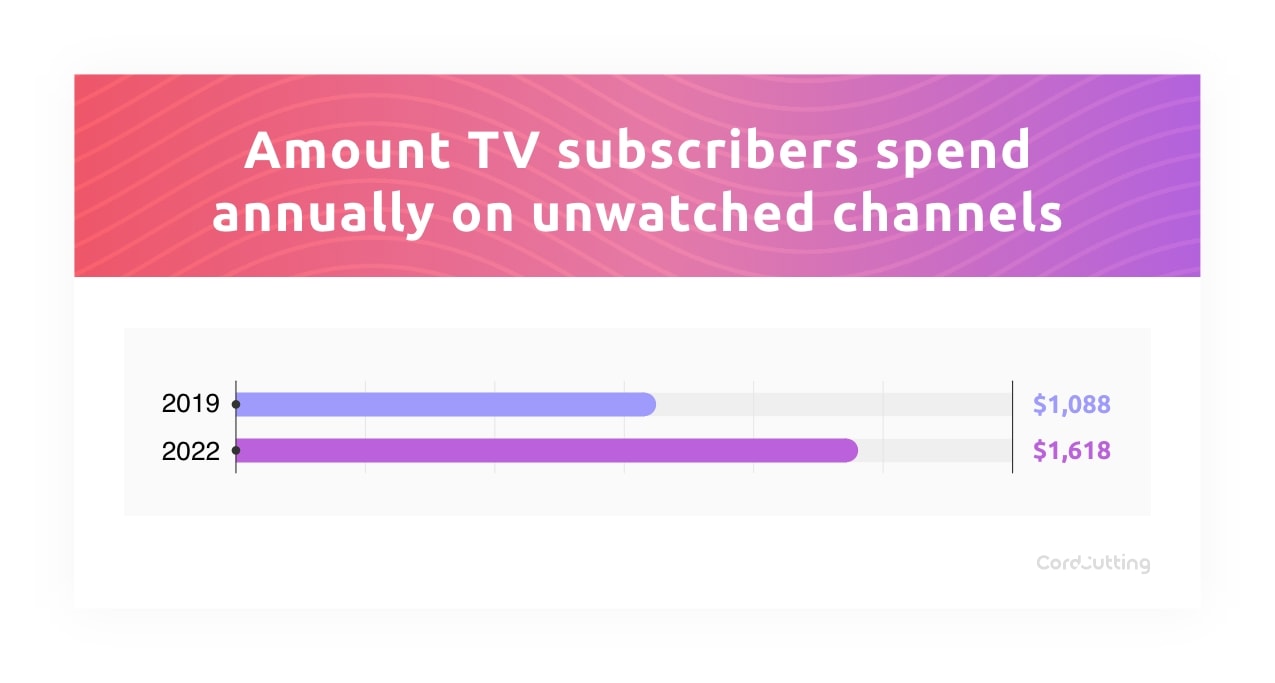 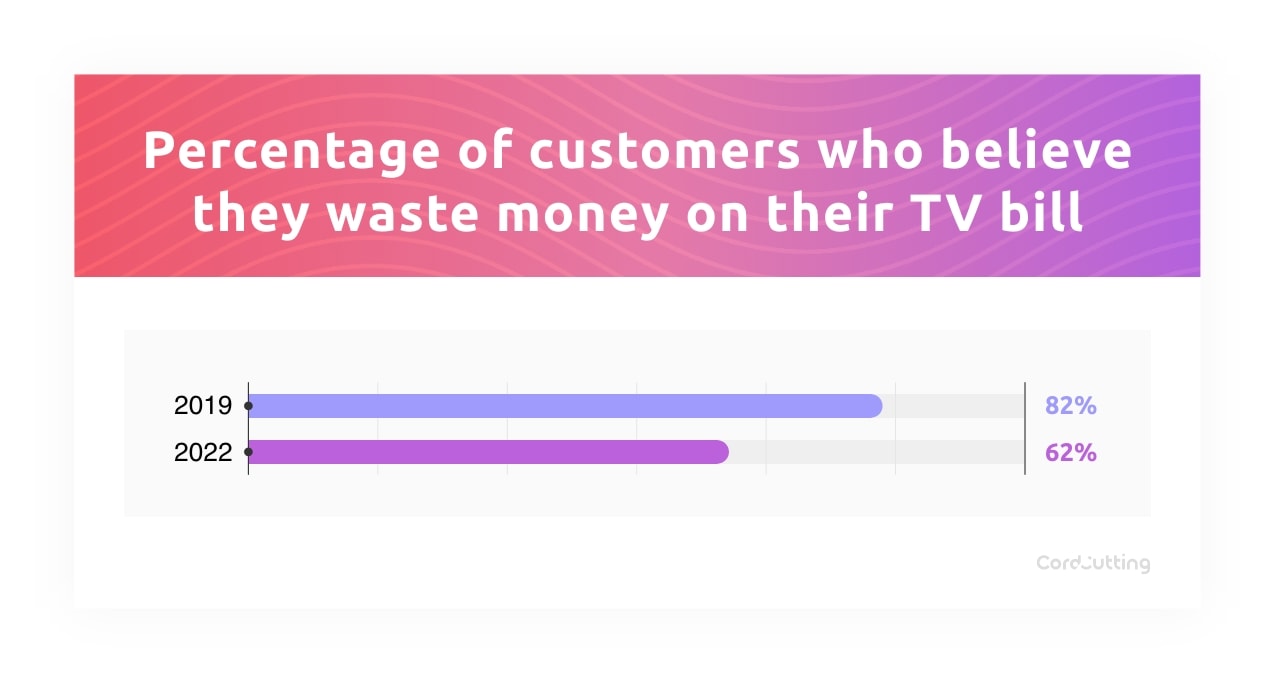 It’s no wonder that nearly two in three cable or satellite customers believe they waste money on their TV subscriptions.

Surprisingly, the dissatisfaction rate has dropped since 2019, but this result comes from a self-selecting group. This year, our respondent pool contained only those who remain tethered to their cable subscriptions. Each year, the number of cable/satellite customers diminishes as more and more people turn to streaming services. Those who continue to pay for cable may just maintain subscriptions out of habit (like landline devotees), or perhaps feel trapped by their cable and internet bundles.

In fact, 45 percent of cable TV subscribers said they would cancel their television packages if they weren't tied to their internet service provider.

Perhaps these “trapped” viewers aren’t aware of the many ISP providers available without the need for a TV subscription. Or maybe they aren’t familiar with all the other television options available today that weren’t in the past.

Click to the Future: Streaming as a Cable TV Alternative

Four out of five traditional TV customers wish they could pay only for the channels they watch – an approach that is similar to the streaming platform model.

Selectively cultivating streaming service subscriptions allows viewers to pay for only the programming that interests them. Streaming customers also get on-demand access to most of their favorite channels: Hulu carries shows from ABC, FOX, and FX, Peacock is an outlet for NBC programs, Paramount+ hosts CBS content, and HBO Max will soon merge with Discovery Channel (and already features Turner libraries). In fact, more than half of all cable or satellite users already subscribe to at least one streaming platform. 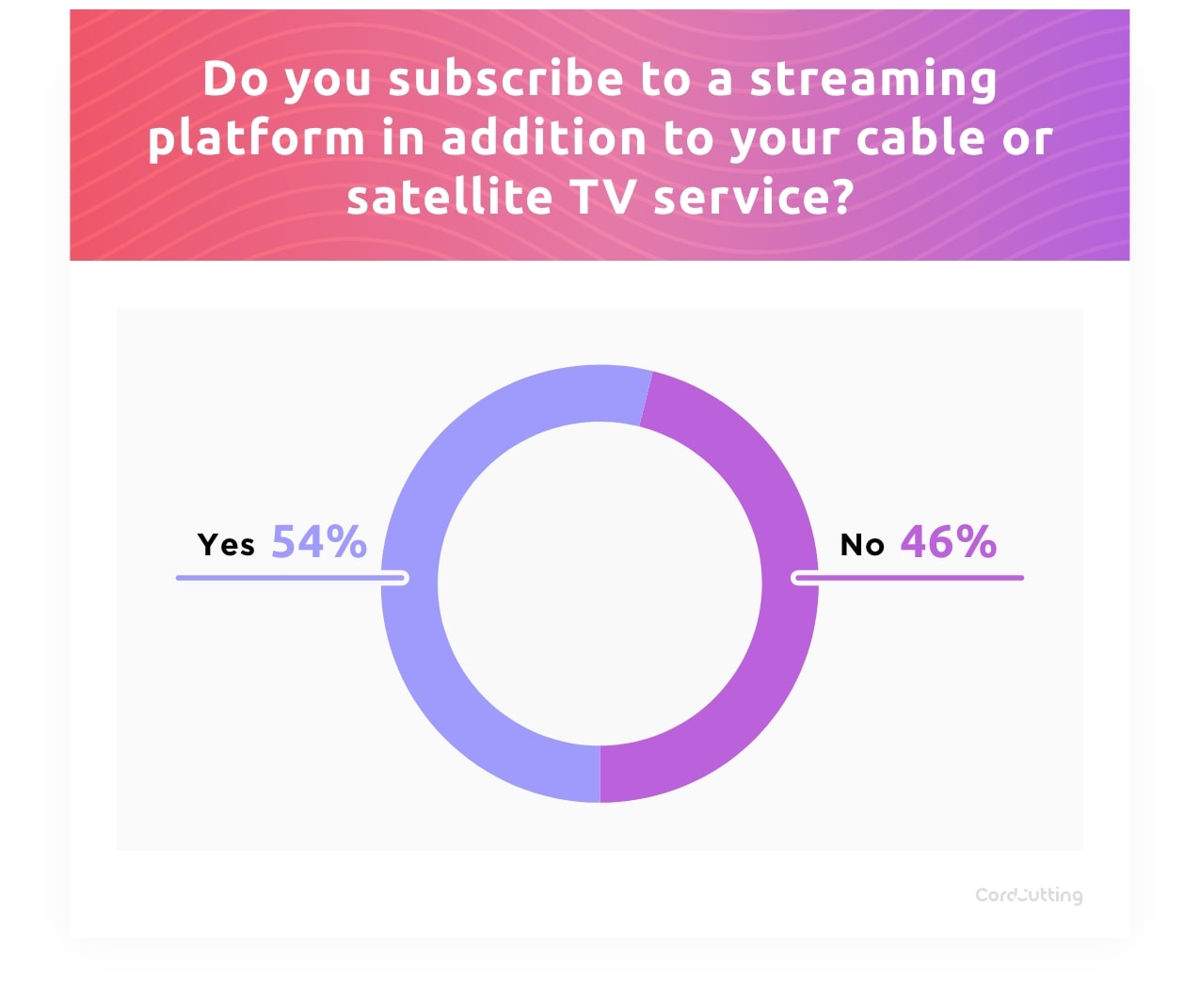 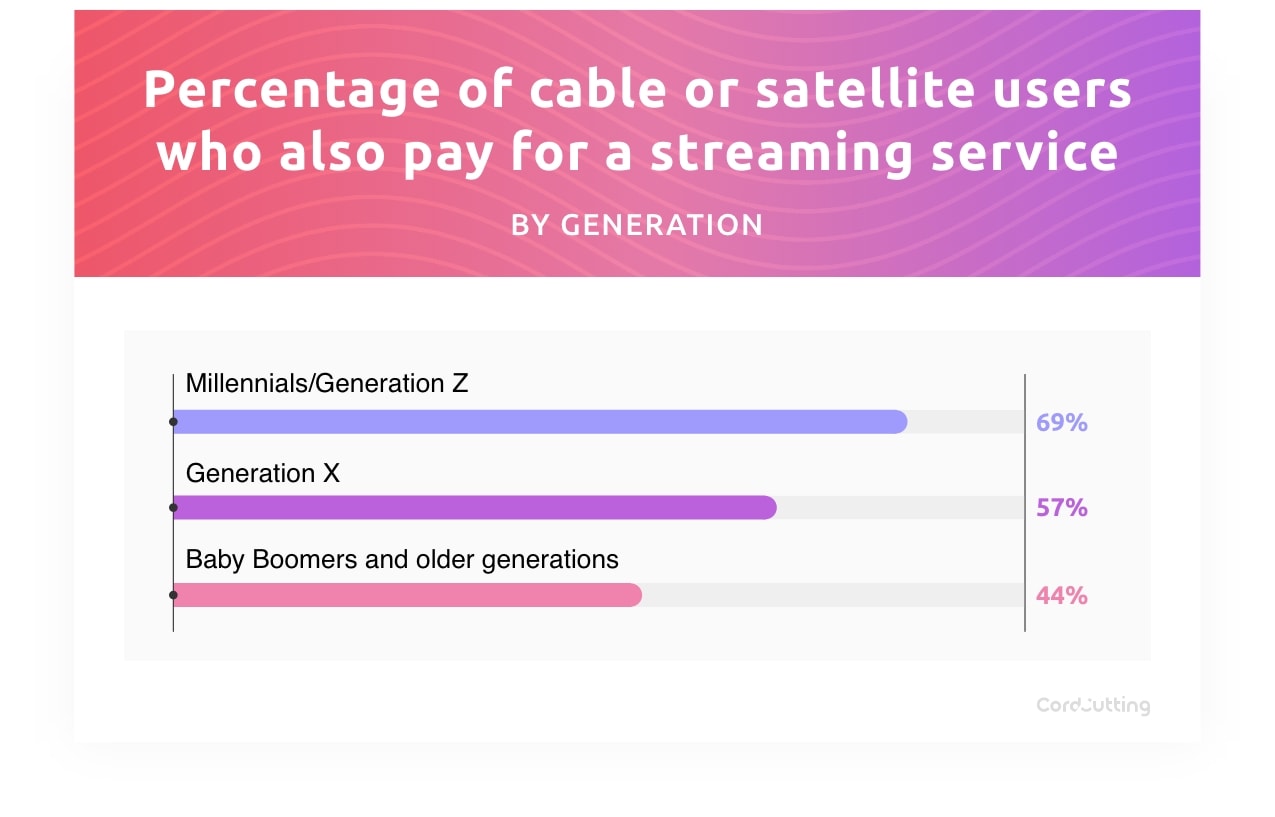 The percentage of cable or satellite TV customers with streaming subscriptions is significantly higher among younger viewers, indicating that this crossover trend will intensify as Millennials and Generation Xers become more prominent than Baby Boomers.

Or perhaps younger TV customers will switch entirely to streaming after taking a closer look at the costs. For less than half of the price of the average cable or satellite subscription, customers could obtain basic subscriptions to most major streaming services (and for a few dollars more, they can access ad-free versions). 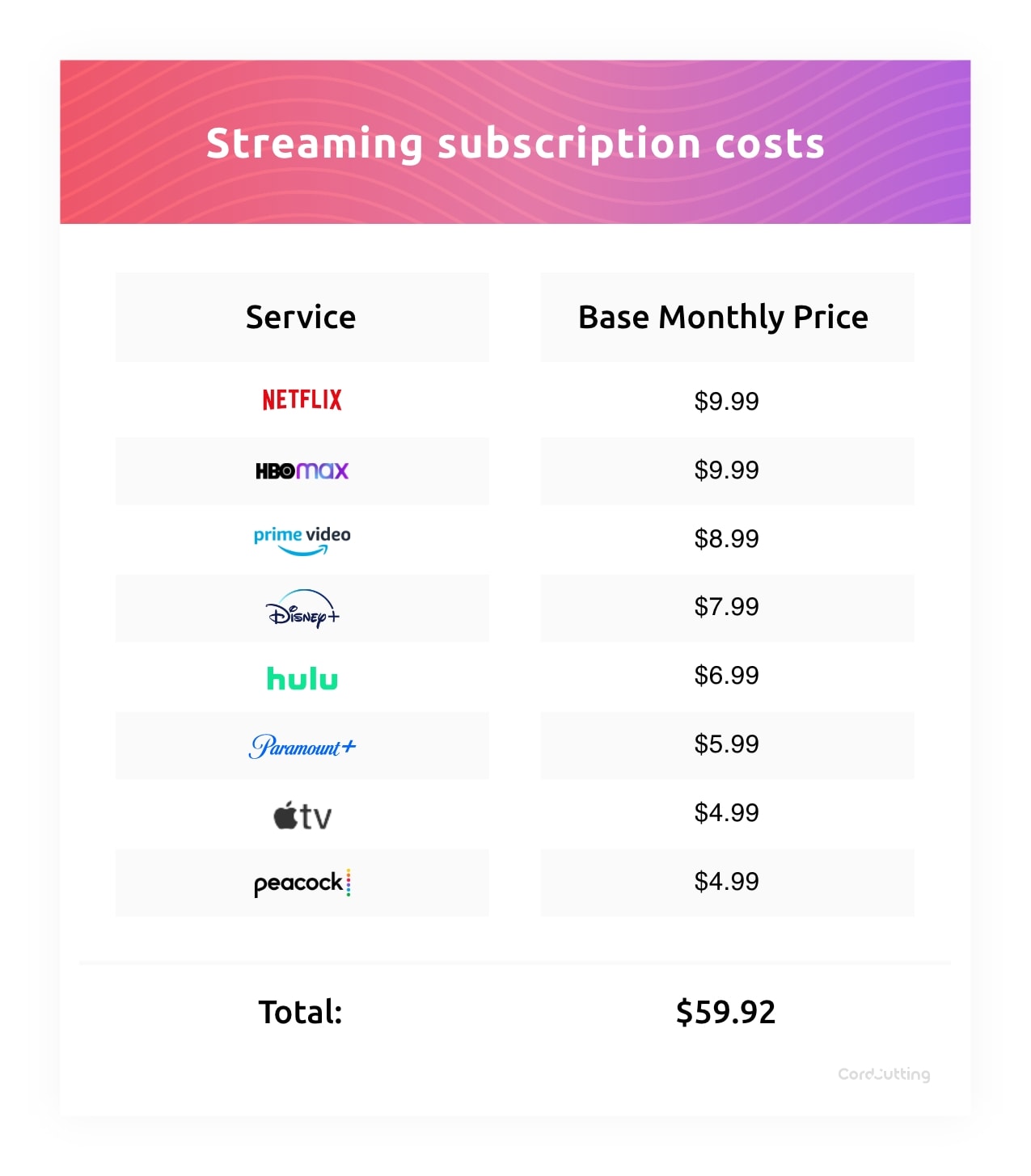 With streaming options providing nearly all the services as cable TV at more affordable prices, it’s hard to understand why anyone stays with cable or satellite packages. Perhaps that’s why industry experts expect the number of cable TV subscribers to soon drop to 50 million unless rising streaming prices drive a resurgence.

In 2019 we learned that traditional TV customers were wasting much of their entertainment budget, and the situation has only worsened since. Today's cable packages offer fewer channels at a higher price, and customers still only watch a fraction of the offerings.

In that same time frame, the streaming environment has grown ever more appealing to viewers. Disney+, HBO Max, Paramount+, Apple TV+, and Peacock all started since our 2019 study. These platforms could also spend up to $50 billion on original content this year alone.

Consumers can subscribe to all of the major streaming platforms for less than half the average cable/satellite bill, and even have some money left over for a digital antenna or live online TV service.

In May 2022, Cordcutting.com conducted an online survey in English of 507 people in the U.S. who were the decisionmakers about television services in their households and who paid for cable or satellite TV services. 51% were women, 48% were men, and 1% of participants were another gender. Participants ranged in age from 18 to 93 with an average of 53.