When it comes to action movies — and Christmas movies, too — it doesn't get much better than Die Hard. This 1988 thriller is a stone-cold classic, and it spawned a whole franchise (the most recent film, A Good Day to Die Hard, came out in 2013). The original is still arguably the best, though, and we're here to help you stream it. Whether you're watching it for the first time or the hundredth, here's how to stream Die Hard online. 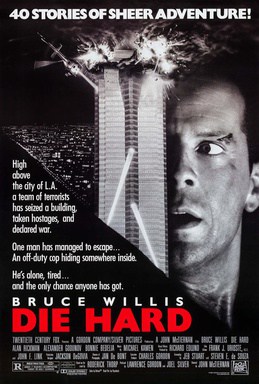 Where Can You Stream Die Hard?

Now, I would never compare myself to John McLane — let me say that right off the bat. But if you imagine that movie titles are terrorists and that the streaming services and all of their international libraries are like the many floors and rooms in a Los Angeles-area skyscraper, and that being a blogger is sort of like being an off-duty cop, then — okay, what I'm saying is that sometimes it's hard to track down the movies you want to watch, but that I'm up to the job no matter what.

Where to Watch Die Hard Online


Pro Tip: With a VPN, you can unlock Netflix in Germany to stream Die Hard.
ExpressVPN is our #1 Pick.

What if Die Hard Isn't Available in Your Country?

That's crazy, and it can be a little frustrating: It stinks to know that Netflix subscribers just like you are enjoying Die Hard when you can't, all because they're lucky enough to live in some privileged nation that is rich in Die Hard streaming rights. The nerve! Luckily, there's a solution to this dilemma.

There's a type of service that CordCutting.com highly recommends for privacy and security reasons that, it just so happens, will also change your IP address. By using a VPN and designating which server you want to route your internet traffic through, you can make it look like you're browsing the net from just about anywhere — like, for example, a nation that has Die Hard on Netflix or Amazon Prime.


Did You Know: VPN's can make it look like you are in another country? ExpressVPN is our top-rated VPN that will allow you to stream Die Hard with Netflix.

Why I Love Die Hard

Webster's Dictionary defines “Die Hard” as “a film or movie starring Bruce Willis and set during Christmastime which kicks tuckus.”

Alright, this is not actually true (and probably won't be true anytime soon, because Webster's has not been returning my emails). But it should be true, because Die Hard is the very definition of a kick-butt action film. It has it all: Guns, explosions, cyber-terrorists, Alan Rickman doing a German accent… I truly cannot recommend it enough.

But, as Lavar Burton always says, you don't have to take my word for it. Die Hard is one of the best-reviewed action films of all time, and it's a must-watch at any time of year — and at Christmas time, especially. It is, after all, a Christmas movie. Watch the movie trailer below:

What to Watch Besides Die Hard

If you're done with Die Hard but are still looking to get more use out of your streaming and VPN subscriptions, no problem: Simply watch Die Hard again.

Then, once you've watched it several times, you may want to check out some other great streaming options. Tubi is a free streaming service that has an excellent collection of James Bond films on offer right now. If you're in the mood for something seasonal, we can help you track down Elf or Christmas with the Kranks. And if you just want to channel surf, I'd recommend a live TV streaming service — we have a few favorites here on the site that are worth checking out.