Comcast is one of pay TV's most important (and infamous) companies. They have a monopolistic grip on a huge swath of the United States, which makes them a popular subject on blogs like ours. But just how big is Comcast, really? What happens when you compare their subscriber numbers to, say, Netflix?

Well, Comcast gets clobbered, as it turns out.

Here's how it looks when we chart each company's U.S. subscriber base over the past few years. No surprises here: we've long seen that pay TV subscriber bases are staying pretty static (and sometimes falling), and Netflix's growth is a matter of record. 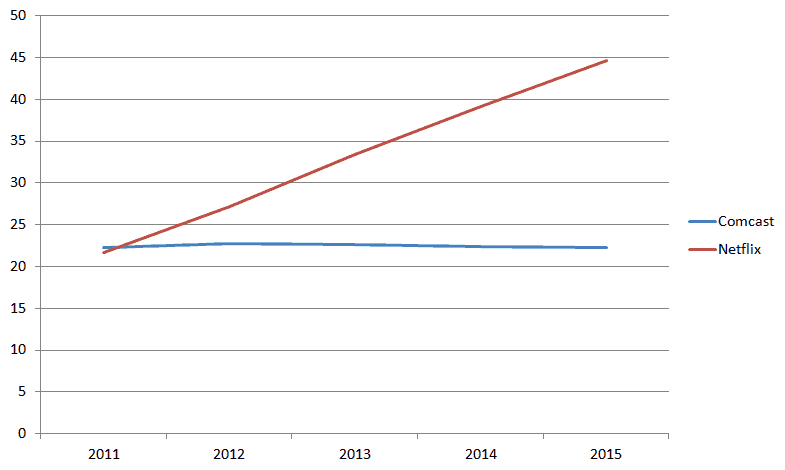 Of course, it's worth noting that these two companies have very different subscriber distribution patterns. Like other cable providers, Comcast enjoys near-monopolies on certain areas, competing mostly with satellite and only rarely with other cable giants. So Comcast's subscriber map would look like a checkerboard, with lots of coverage in certain areas and none at all in others. We'd expect Netflix, on the other hand, to have customers distributed fairly evenly across the country.

Nevertheless, these are national companies on the opposite side of the streaming/pay TV war, so the comparison is worth looking at. These figures suggest that Comcast's competitive landscape (which is full of other giants like Time Warner Cable and huge monopolies like TWC's hold on New York City) will always keep its subscriber count down, while Netflix (which had a head start on most of its competition) has racked up serious numbers by spreading freely across the country (and the world, though for fairness' sake we've left Netflix's international subscriber figures out of this fight).

These numbers also drill home the difference in business models between the two companies. Netflix makes its money off of a lot of subscribers paying about $10 a month each, while Comcast charges far fewer customers far more.