Netflix has had its ups and downs over the past year, but CEO Reed Hastings' CES 2016 keynote makes it clear that the streaming giant is still growing. Even as its subscriber base grows, Netflix is enjoying more streaming hours per subscriber. In fact, the data shows that Netflix subscribers stream almost 300 hours per year more than they did just five years ago. That's a dozen days' worth of new streaming per subscriber!

The numbers look very different now. In 2015, Netflix had 74.76 million subscribers, or about three times as many as in 2011. But as the subscriber base has grown, so have streaming hours per subscriber – at an average of 16.41% each year. 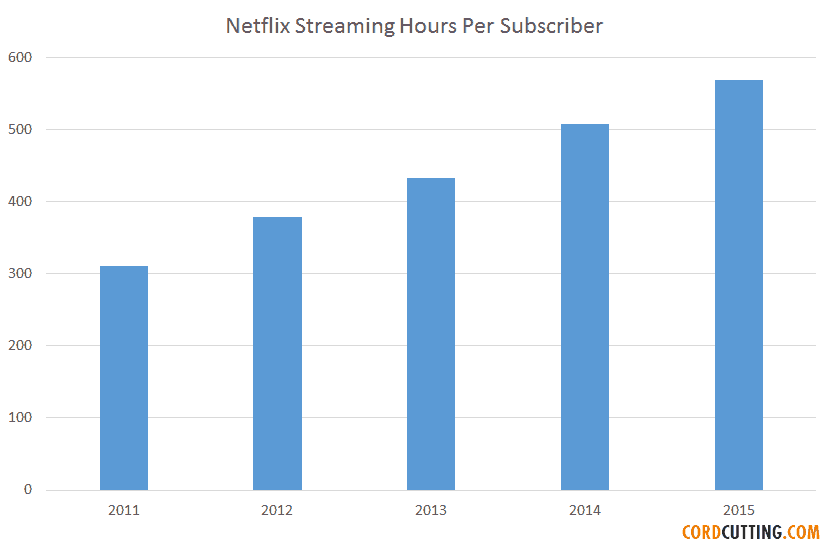 While we don't have official Netflix figures for 2016, we did the math for 2016 based on daily rates in our piece on Netflix and commercials. We determined that Netflix users are on track to stream 600 hours of content in 2016. That's roughly 12 days more Netflix per subscriber per year than in 2011!

You have to be impressed with Netflix's analytics here, as they've somehow been able to milk subscribers for more streaming even as their library shrinks. Netflix appears to have become more efficient in some important way, and it's doing a great job of fending off new rivals, growing its subscriber base, and getting more about of each subscriber.