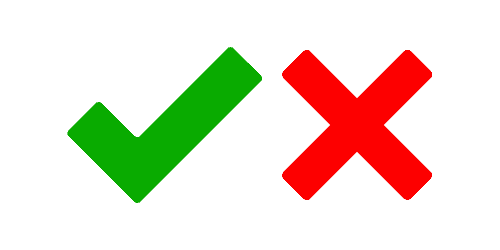 According to a survey we conducted over at our sister site, AllFlicks, Netflix users think they're getting a pretty good deal on Netflix – but would cancel their subscriptions if asked to pay more.

Our survey polled 500 current Netflix subscribers and asked them their feelings on Netflix's price, potential price increases, and the price of other available streaming services. Netflix isn't known to be considering any price increases, but we thought it would be interesting to see how savings factor into cord cutters decisions, and how flexible they consider their Netflix memberships to be. 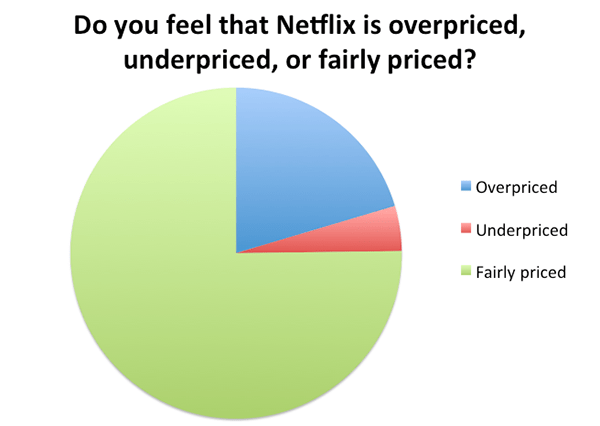 In our first poll question, we asked users if they felt Netflix was “fairly priced,” “overpriced,” and “underpriced.” The responses were fairly positive for Netflix, with 376 of the 500 respondents saying that Netflix was “fairly priced.” That's 75.2%, a remarkable mandate for Netflix's current prices. Not everyone is happy, of course: 20.4% of respondents said that Netflix was overpriced. Only a small percentage (4.4%, to be exact) were willing to say they viewed Netflix as underpriced.

The Competition Is Too Pricey

Netflix's good figures look even better when you compare them to the field. When we asked about other streaming services (as a group), we found that users were generally much more displeased with their pricing. Just 44.9% of respondents felt that Netflix's competitors were fairly priced. A majority of the respondents – 53.4% – felt that other streaming services were overpriced. Out of 474 people who answered the question, only 8 felt that Hulu, Amazon Prime, and the rest of the gang were underpriced. In the comment section of the survey, several users cited Amazon's yearly payment plan as a hurdle (it is possible to switch to monthly payments for Prime, but only after paying up-front and then accepting a refund).

Netflix Users: Keep the Price Where It Is

As far as price goes, our poll says, Netflix is beating up on its rivals right now. But what if Netflix's price goes up in the future? Our poll asked respondents to decide whether or not they'd continue to subscribe to Netflix if, against their apparent wishes, Netflix decided to raise their prices. The answer was a resounding “no.”

In the comments section of the survey, many respondents answered that they would be willing to see a price increase if there was a commensurate increase in content. “If it included more quality movies, I wouldn't hesitate to pay more,” one respondent wrote.

Some users even suggested putting ads on Netflix as a way to keep prices low. That's pretty remarkable, considering the common knock on Hulu is that it has commercials (rumors of a commercial-free Hulu on the horizon caused quite a bit of excitement in the cord cutting community not long ago). Still, several respondents said, they'd cancel over high prices, but not over ads.

Of course, what users will do in practice may differ from what they say they'll do in a poll. Still, it's impressive to see how inflexible most users feel that they are on their Netflix expenditures. Upon reflection, it makes a lot of sense – saving money is the core reason for cutting cable in the first place, so it stands to reason that cord cutters are pretty price-aware. And if Netflix or Hulu's price goes up, some might respond the way one of our participants did: “Might as well get cable or satellite.”

A note on the sample: this survey was conducted on our sister site, AllFlicks, which caters to Netflix users (AllFlix offers sortable lists of films and shows available on Netflix, along with ratings and other information). If anything, our sample should skew towards power-users – people you'd expect to value Netflix very highly – yet we still saw remarkable resistance to any price increase.

It's also worth noting that, since our poll focused on Netflix subscribers, there is a question of bias against the other streaming services. This poll should be considered a measure of how Netflix users view prices, not how streaming customers as a whole do.