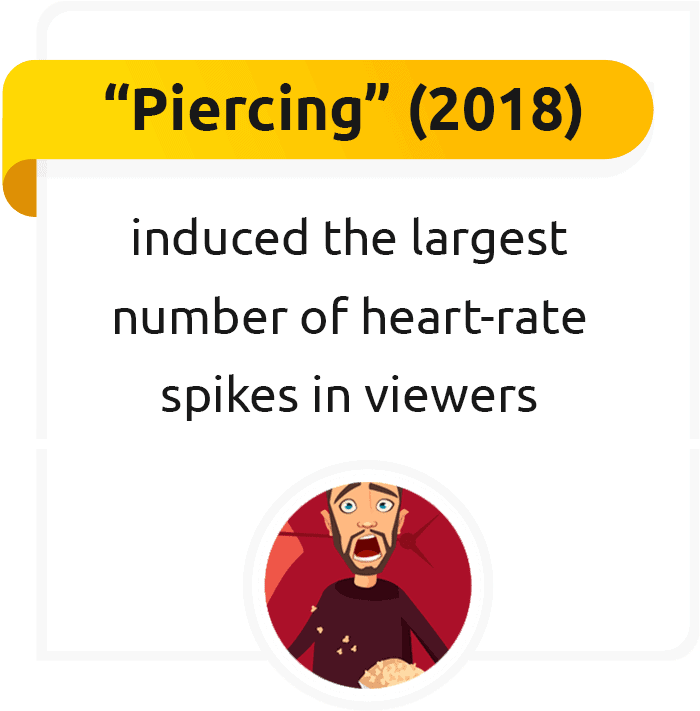 Taste is subjective, but fear is a fact. A horror movie's scariest on-screen moments can trigger real-life fight-or-flight reactions in viewers, resulting in an elevated heart rate.

Knowing this, our CordCutting.com team set out to answer a terrifying question: Which horror movie on Netflix is streaming's scariest option? To find out, we recruited four horror film fanatics and equipped them each with an Apple Watch to monitor their heart rate as they braved the best of Netflix's scary-movie selection. We tracked the total number of heart-rate spikes that each of 10 top Netflix horror movies inspired in our testers and compared the pulse-racing effects of different scenes and films. Here's what we learned.

When it came to getting those heart rates up, Piercing (2018) was the clear winner. Across all four testers and the full runtimes of each movie, Piercing spiked heart rates the most often: It racked up an average of 5.5 heart-rate spikes per tester.

It’s not hard to see why. Piercing is the macabre tale of a family man with murderous impulses who hires a sex worker he’s planning to kill. Things go off the rails quickly, though. As the strange cat-and-mouse game heats up, heart rates spike — and we have the data to prove it.

As scary as it was, Piercing had some competition. Our second-place finisher, Before I Wake (2016), was hot on Piercing’s heels with an average of 5.0 heart-rate spikes per tester. In Before I Wake, an orphan’s dreams quite literally come to life, scaring the heck out of his adopted parents (and our testers, too). 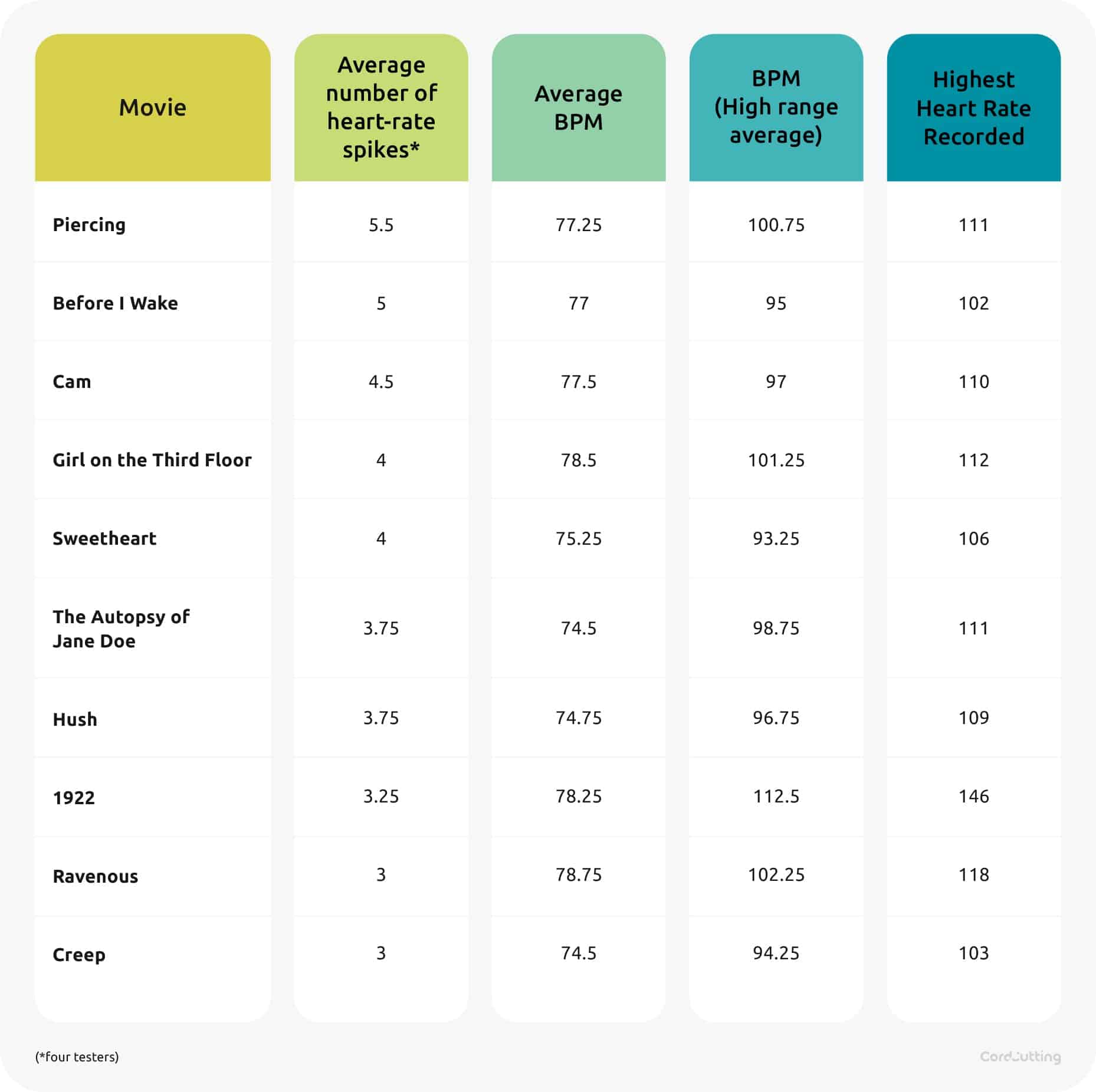 Heart Rate: The speed of the heartbeat measured by the number of contractions of the heart per minute

Heart-Rate Spike: Any time a participant's BPM rises significantly above their average BPM at any point during the duration of the film.

BPM High-Range Average: For a given movie, we took all four participants, found their high range BPM ( the highest their BPM got during the whole movie), and took the average of all four.

Beat for beat, no movie could match Piercing’s total number of heart-spiking moments. But not all scares are created equal. Though it didn’t have as many total heart-racing moments as Piercing, Before I Wake, or Cam, the 2017 horror film 1922 offered consistently high-quality scares. The heart-rate spikes triggered by 1922 reached an average of 112.5 beats per minute (BPM), the highest average spike among all the movies we tested.

Based on a Stephen King short story, 1922 is a period piece as well as a horror film. It follows the tragic story of a man who murders his wife — and enlists the help of his own teenage son in doing the deed. As you might expect from Stephen King, there’s a mix of psychological and supernatural horror here. The former creates a great atmosphere, and the latter (our data shows) really raises viewers’ heart rates.

Sweetheart (2019) was another film that had our test-viewers on edge. Produced by the horror experts over at Blumhouse Productions, Sweetheart is a paranormal tale of survival-horror that follows a shipwreck survivor’s run-ins with — well, we won’t spoil it for you, but it’s pretty scary stuff. Sweetheart’s scares had our testers’ heart rates rising with enough regularity to score a fifth-place finish in our rankings, well ahead of much of its very scary competition.

Interestingly, though, Sweetheart’s scariest moments triggered a heart-rate spike that reached an average of just 93.25 BMP — the lowest average for a top scene in any of the films we tested. That makes Sweetheart an interesting contrast to films like 1922. While 1922 featured fewer heart-pounding moments, it clearly scared the bejesus out of our testers when it finally got going. Sweetheart’s greater number of spikes but lower heart-rate pinnacle shows that it was more about consistently scary moments than a few big payoffs. Both approaches are valid — and scary — but they make for two different sorts of horror-film experiences.

Spoiler alert! In this section (and this section only), we’ll talk about the very scariest scenes in the most frightening films we studied.

What makes a heart-pounding scene? The supernatural seems to help. Supernatural monsters and ghosts were key players in several of the scariest scenes we found. In Before I Wake, for example, the scariest scene takes place in an orphanage overrun by terrifying supernatural creatures. At the climax of the scene, Jessie (the adoptive mother of a child whose nightmares have become real) is attacked by a monster.

Violence is a big heart-rate trigger, too. According to our testers’ heart rates, the scariest scene in Piercing came just 20 minutes into the movie, when the would-be murderer finds his target in the bathroom, stabbing herself in her own leg. When watching Girl on the Third Floor, a horror film about a man trying to fix up a haunted house, our testers’ heart rates peaked as the character Milo was murdered with a hammer. And just five minutes into Cam, we saw the biggest spike in that film as testers watched the protagonist slit her own throat — though the film soon reveals that she has faked the act as a practical joke.

If each of these is scary, both together is even scarier: In 1922, the moments that scared our testers the most were those that cut rapidly back and forth between two ongoing scenes. In one, the ghost of the murdered wife confronted her killer; in another, the son and his girlfriend died violently after a botched heist.

For our main rankings, we ordered films from scariest to least scary based on the total number of heart rate spikes all participants experienced during the movie. In the case of ties, we used the highest BPM-spike average as a tiebreaker. To calculate these highest BPM-spike averages, we found each tester’s highest heart-rate spike in each film and then averaged those high-point heart rates for each film. To identify the scariest scene in each film, we counted the number of heart rate spikes experienced by all contestants during certain times in the movie; the times in the film that had the most spikes out of all contestants were deemed the scariest.