The State of Streaming Services:
Q1 2021 Outlook Cordcutting.com’s Q1 report reveals that cord-havers spend an average of $45 per month on streaming — a figure that’s on-par with streaming spending by cord cutters

Swapping out cable or satellite for streaming alternatives can make life a lot more convenient. On-demand streaming services like Netflix let viewers watch the favorites on their schedule, and multichannel streaming services like Sling TV offer more flexible and mobile-friendly versions of cable and satellite’s bulky bundles. But convenience is just a perk: At its core, the cord-cutting movement is about saving money.

But as prices rise and choices multiply, are cord cutters still saving money? Our Q1 report suggests that they are, but for a surprising reason: Streaming services are not broadly functioning as cable replacements. Cable and satellite customers — so-called “cord havers” — are subscribing to streaming services, too, effectively rendering streaming budgets a nonfactor in cord-cutting savings.

Our findings suggest that convenience and other non-financial factors in streaming aren’t as important to the cord cutting trend as might be imagined. But, conversely, the high levels of streaming spending among cord havers suggest that convenience, original content, and other factors are more important — not to the narrow world of cord cutting, but to the broader world of TV entertainment.

Cord-Cutting Is Still All About Saving Money

Cord-cutting began as a movement focused on home entertainment budgets. Is budget still the only big motivation to cut the cord? 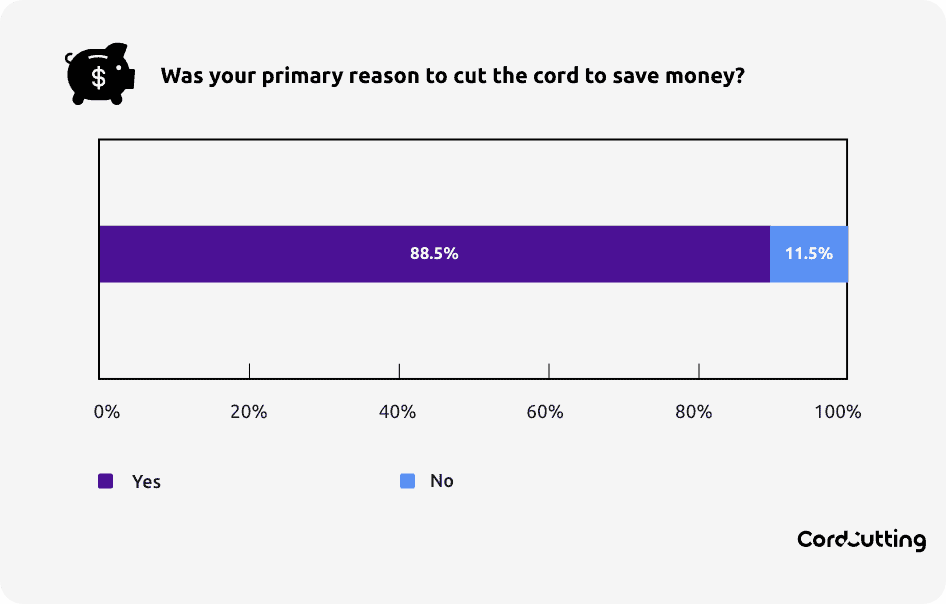 Among respondents who had cut the cord, 88.5 percent cited saving money as their primary reason for making the jump from cable or satellite. It’s a goal most cord cutters have met: 83.3 percent of former cable and satellite customers believe that they’re paying less for entertainment now than they did in their cord-haver days. 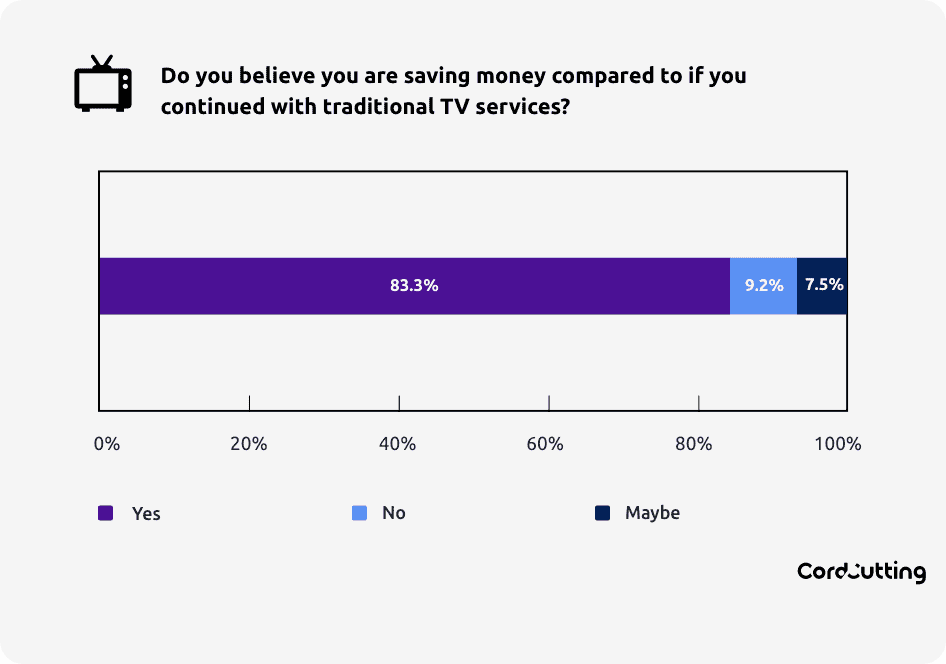 But are cord cutters really saving the money that they think they are? One good reason to think so is the steep and ever-rising cost of legacy pay TV. Among “cord havers,” 39 percent reported a pay TV bill of more than $100 per month. A clear majority of cable and satellite customers reported paying more than $80 per month. 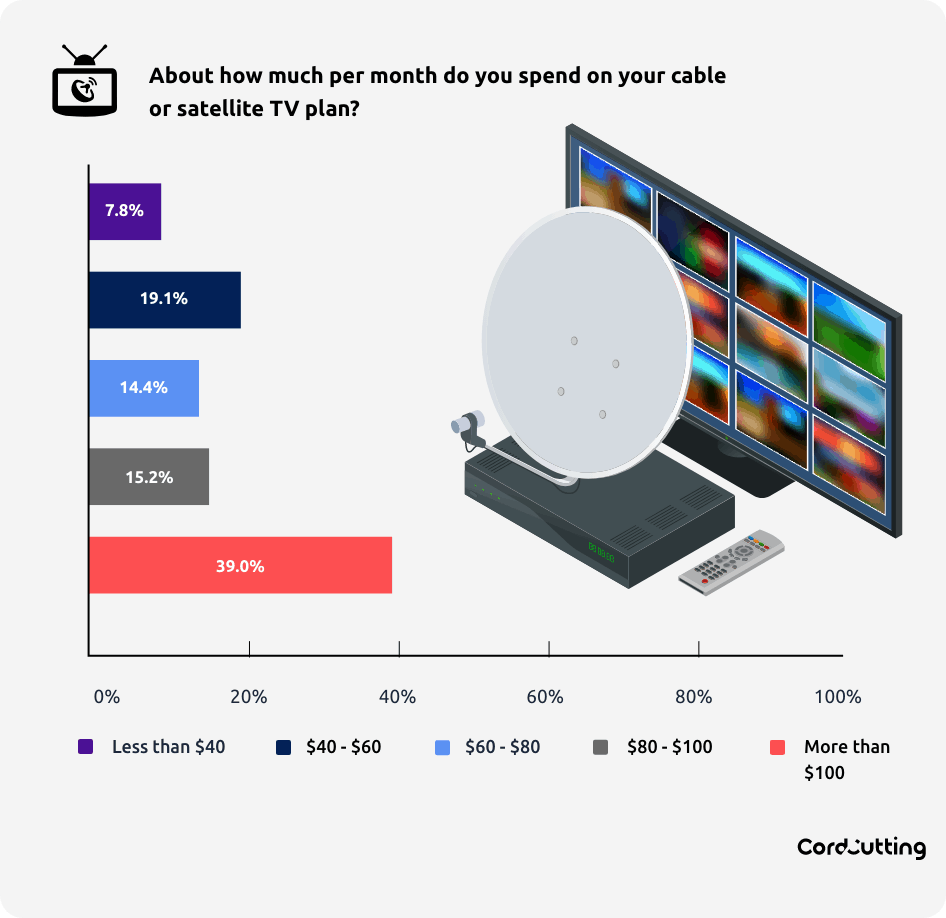 Cable’s high prices make cord-cutting an appealing idea. But streaming services, too, can cost consumers. Long gone are the days of one small Netflix bill; modern streamers can expect to juggle multiple services, some of which have grown quite expensive.

There’s no question that streaming is getting pricier. The rising price of streaming is most clear in the case of live TV streaming services, which also happen to be the most direct competitors to legacy pay TV services like cable and satellite. Still, the multiplying on-demand options can cost quite a bit, too: Streamers who subscribe to Netflix, Hulu, Amazon Prime Video, Disney+, and HBO Max will see combined bills of around $50, with some variation depending on their subscription plans.

Consumers are noticing the pinch. Among all streamers — cord havers and cord-cutters alike — 38.6 percent believe they’re spending too much on streaming. Only 5.1 percent expect to increase their streaming budgets anytime soon. 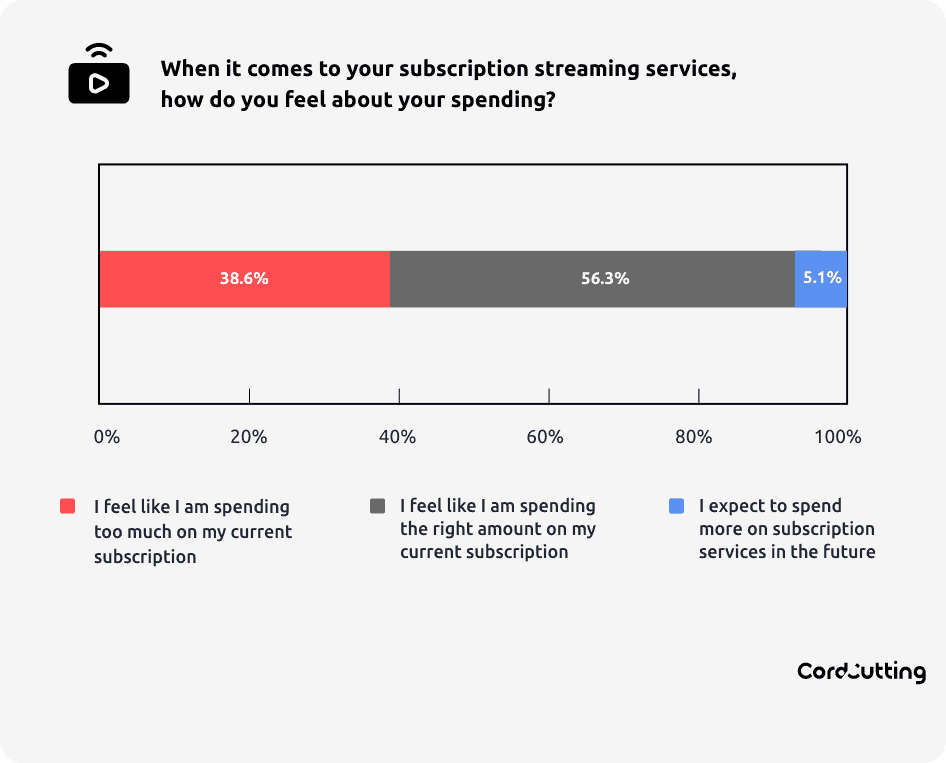 Clearly, the increasingly fractured streaming market is also increasingly expensive for streamers. That gives rise to our central question: If streaming is more expensive now, does that make cord-cutting a worse deal? Are cord cutters now paying just as much for streaming as they once did for cable — even if more than 80 percent of them insist otherwise?

A back-of-the-envelope calculation might suggest that cord cutters really are losing out. An unbundled internet price can run into the $50-70 range and beyond. “Skinny bundles” are fast approaching cable in price. Throw in the aforementioned $50 for on-demand streaming services, and you’ve easily surpassed the average cable bill. But there’s a problem with this logic.

When critics suggest that rising streaming service prices could make cord cutting more expensive, they rely on an unspoken assumption: Changes in streaming service costs affect cord cutters more than cord havers. Our data suggests that this simply isn’t so.

According to our study, the streaming services we’ve been discussing here are indeed common among cord cutters. But — crucially — they are also common among cord havers. In fact, we found no meaningful correlation between cord cutting and subscription rates to the major on-demand streaming services, including Netflix, Hulu (on-demand version), Amazon Prime Video, and Disney+.

Nor did our study find that cord cutters had a larger total number of subscriptions. In fact, our study revealed that cord cutters were likely to have fewer — albeit by an extremely narrow margin. That seemingly counterintuitive result may have something to do with the relative income levels and ages of cord cutters and cord havers. Cord cutters were overwhelmingly likely to cite savings as their reason to cut the cord in the first place, and that price-sensitive behavior appears to play out in their behavior as streaming consumers. 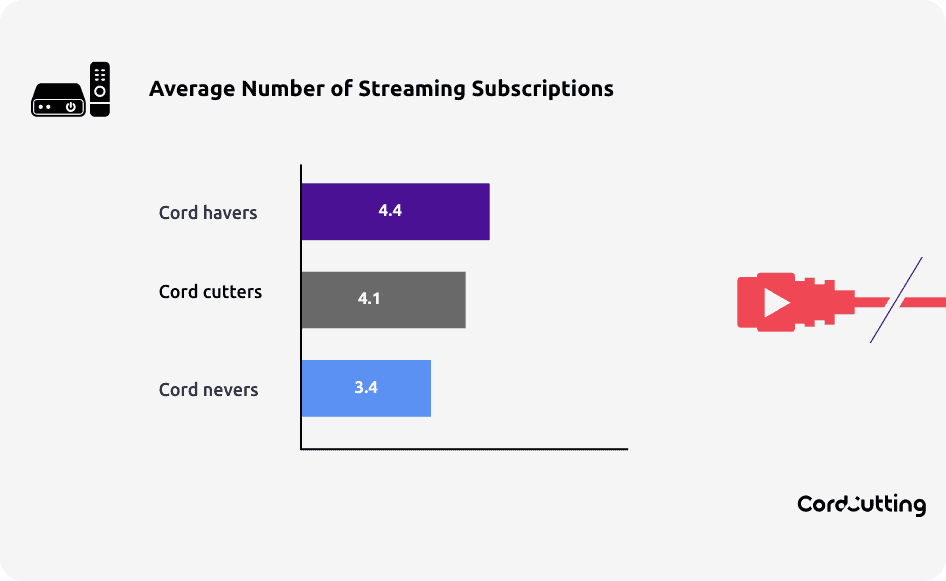 It may be true that loading up on streaming services can cost a consumer $50 or more a month. But cord cutters, our study suggests, simply aren’t likely to spend that much. Most spend less than $50 per month on their streaming subscriptions, with typical budgets falling in the $10- to $30-per-month range.

Pricey cable replacement options like YouTube TV may appear to complicate the situation: a cord cutter with just YouTube TV would have an over-$50-budget without having many subscriptions. But our data shows a very high correlation between subscription count and budget, and it also shows that subscriptions to pricey live TV streaming services form a very small part of the cord-cutter pie. Massively popular options like Netflix and Hulu have a far greater impact on overall streaming spending than pricey live TV streaming services, which — despite the headlines they grab with their prices — are simply not used as widely. 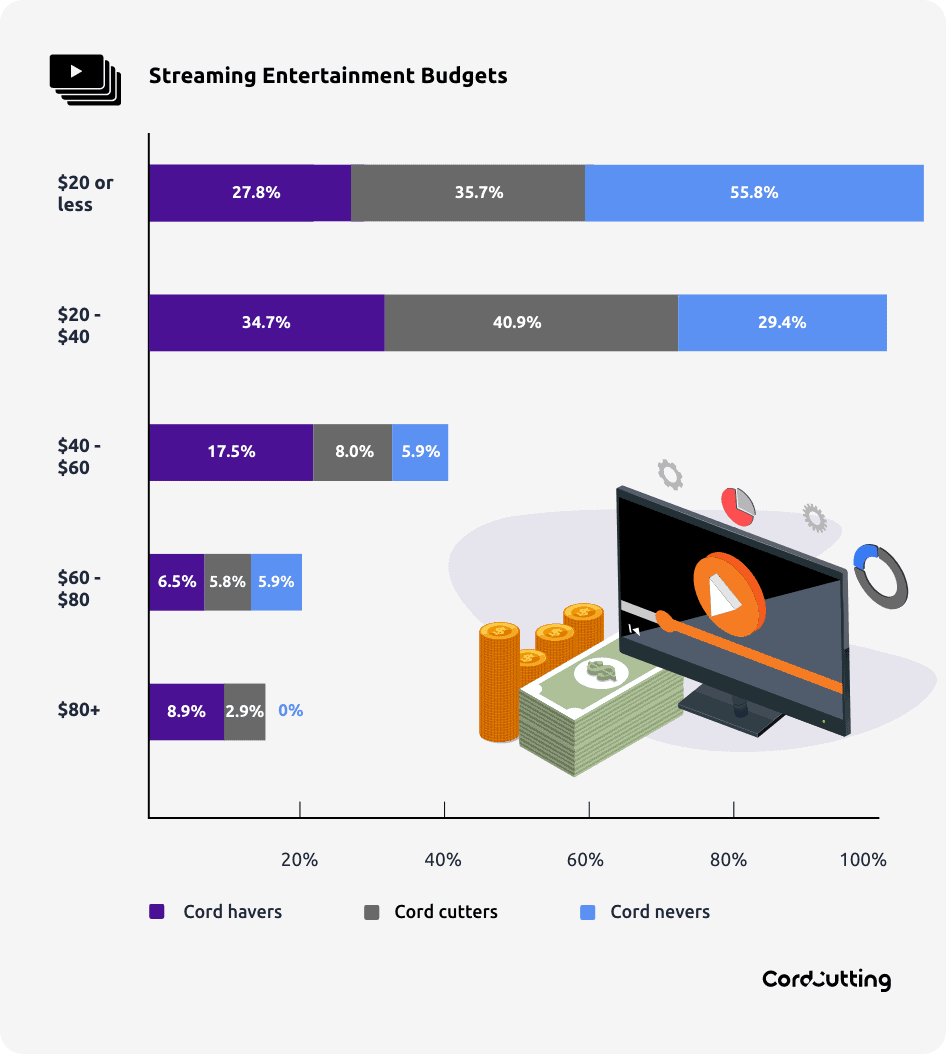 The idea that rising streaming prices could cut into cord-cutting savings is completely upended by the reality: Cord havers are subscribing to streaming services, too, and there is little, if any, correlation between cord cutting and subscription rates for the most popular streaming options. With streaming spending neck-and-neck between cord cutters or cord havers, we’re left with a fairly simple picture: Cord havers pay more for entertainment than cord cutters, for the simple reason that it’s more expensive to have cable than to not have it.

While cord cutters have to pay for unbundled “internet only” plans, they don’t have to pay for cable or satellite service. With streaming budgets nearly equal and cable costs remaining sky high, cord havers end up with significantly higher overall entertainment budgets than cord cutters.

For this research, we surveyed more than 900 U.S. adults about their TV budgets and their current and past relationships with legacy pay TV services. Our survey was conducted online. Our sample is selected and weighted in order to best reflect the demographics of the nation at large.