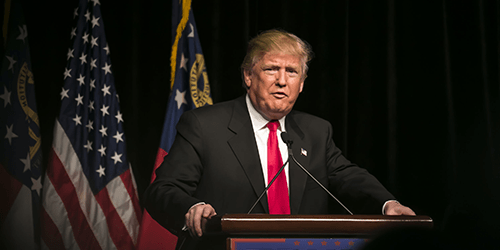 There are a lot of issues at stake in this year's presidential election, but none affects cord cutters quite so much as net neutrality. Net neutrality – the idea that your internet service should allow you to access all sites, without price tiers or data throttling – has long been a hot topic in Washington, but a changing of the guard could draw new attention to the issue.

Net neutrality has plenty of friends and foes already on the battlefield, but none will loom larger than the incoming president. That's why we're taking a look at how each of the potential commanders-in-chief would tackle the issue. Today's subject: presumptive Republican nominee Donald Trump.

What Is Donald Trump's Position on Net Neutrality?

Donald Trump's Republican party has generally been less favorable towards net neutrality than the Democrats. That's because a non-neutral net is ostensibly a more free-market solution than a neutral one: without net neutrality protections, ISPs would be able to price their product however they see fit, even if that makes us consumers miserable (of course, some would argue that utility-like infrastructure concerns and monopolies in this market space make any free competition-based argument disingenuous, but hey, that's why this is a debate).

But just because Republicans believe something doesn't mean that Trump does. The businessman and former Democrat has run a very distinctive campaign, mixing certain far-right ideas with some surprisingly centrist ones, and his positions on things like the Trans-Pacific Partnership make it clear that he's not a strict free market guy.

Net neutrality is not a trademark issue for Trump, who makes no mention of it whatsoever on his campaign website. But we do know that he opposes it, thanks to one of his famous tweets:

Obama's attack on the internet is another top down power grab. Net neutrality is the Fairness Doctrine. Will target conservative media.

This is a tough quote to unpack, because, to be frank, it doesn't really have anything to do with what net neutrality actually is.

The Fairness Doctrine that Trump is referring to here is a now-defunct FCC regulation that, until 1987, required TV broadcast media to present controversial issues in “balanced” ways. It targeted TV broadcasters, not cable providers, and had to do with content, not access. There's really nothing to connect it to net neutrality, which is in no way related to content or media, and strictly about whether or not internet service should provide access to all sites at the same price.

Trump isn't the first candidate to have attacked net neutrality while appearing to not understand what it is. Just two days before Trump's tweet, then-candidate Ted Cruz fired off a similar tweet, calling net neutrality “Obamacare for the internet.” Aside from the fact that both policies are (very generally) about regulating industries, those two things have nothing in common.

Other than that tweet, Trump and his campaign have been mum on net neutrality. All we know is that he opposes it, and that he considers it a potential source of liberal censorship.

It's not clear that Trump really understands net neutrality. It's possible that he does, and that he's deliberately obscuring the issue in order to garner support for his anti-neutrality position, but that possibility is just so much speculation. And if we take Trump at his word, we have to assume that he erroneously thinks that net neutrality is President Obama's plan to censor the internet.

Whether or not Trump really knows what net neutrality is doesn't alter the underlying reality. Regardless of whether he understands the concept or thinks it's a secret Obama plot, Trump has made it clear that he is completely against net neutrality. The only comfort for pro-neutrality voters is that Trump doesn't appear to consider the issue much of a priority.

2 thoughts on “Donald Trump Is Against Net Neutrality, to the Extent That He Even Knows What It Is”