Free over-the-air TV is one of the most powerful tools at a cord cutter's disposal. With an over-the-air antenna, you can watch all the free TV you want to without a cable or satellite contract. But what about one of cable's more modern perks: the ability to pause, rewind, and record live TV? Can you use a DVR without cable? Is there such a thing as an antenna DVR?

There is! Thanks to OTA DVRs, it is possible to pause, rewind, and record live TV using an over-the-air TV antenna. Below, we'll explain the concept, show you how to record over-the-air TV and how to use a DVR without cable, and lay out your best options for OTA DVRs and similar solutions.

How to Record Over-the-Air TV

When you plug an antenna into your television, you're connecting it to a TV tuner that reads the over-the-air TV signals picked up by your antenna and then displays them on your TV. That means, generally, that you can't do much besides just watch the free over-the-air TV – recording it is out of the question if all you're using is a TV and an antenna. And for each additional TV, you'll need an additional antenna.

Again, though, that's only the case if you use nothing but TVs and antennas. But what if we open up our options a bit and start considering additional technologies that work with over-the-air antennas? Well, then we'll find that we actually don't need an antenna for every TV in the house.

One type of device in particular – the OTA DVR – is particularly relevant to this discussion. An OTA DVR is just an antenna DVR. Like a regular DVR, it has an input for your TV source (just plug in the antenna where the cable would go) and writes what it records to a hard drive, allowing you to later access that recording and play it on demand.

Let's take a closer look at the OTA DVR, our best answer to the question of how to record over-the-air TV.

OTA DVRs and How They Work 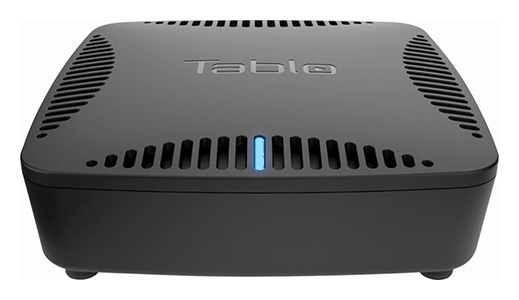 That's the Tablo, but there are plenty of other dark gray boxes on the market for your purchasing pleasure. Somewhere on the thing, you'll find a coaxial jack, which is what you plug one of these into: 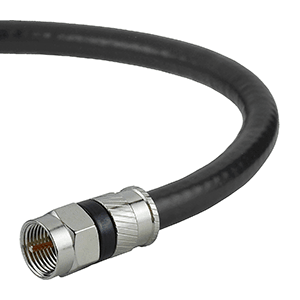 There's one of those on your over-the-air antenna, so, naturally, that's what you'll stick on the coaxial jack on the OTA DVR.

Then you'll need a hard drive to store all the good stuff you'll be recording. On some models, this is built in; in other cases, you'll need to rely on an external hard drive that you'll purchase separately.

Next up: actually recording the shows. There are two main ways that OTA DVRs work in this respect.

The first is to use an app. The Tablo up there doesn't actually connect to your TV at all – you can put it (with its attached antenna) in a totally different room, if you so desire. That's because it uses Wi-Fi to allow you to pick recordings – and play them – with an app. You can get the Tablo app for smartphones and other devices. You can get it for streaming devices like the Roku, so if you still want to select recordings with your TV and a remote, you can do that. It's just that the device recording the stuff isn't actually physically connected to your TV – it's using Wi-Fi.

Then there are OTA DVRs that do connect to your TV. In these cases, you're still plugging the antenna straight into the DVR, but you are then connecting your DVR to your TV with another cable. Some of these devices also have apps, though, so the difference is kind of academic: in all cases, you can set recordings from mobile apps or right on your TV, and can view the recorded goodies on your TV.

One more thing is worth mentioning here: OTA DVRs, like regular DVRs, typically have subscription fees. In many cases, you can get bare-bones functionality without paying for a subscription, but the bells and whistles – like fancy program descriptions and mobile features – require you to sign up for a premium service. In some cases, you can swap the monthly fee for a big lump sum payment that nets you a lifetime subscription. Those sorts of specifics depend on which brand and which device you choose.

Which OTA DVR Is Right for You?

You can use a DVR without cable! There are a lot of great companies out there making OTA DVRs right now. Let's cover a few of them right here.

TiVo is the biggest and baddest of the DVR companies, and for good reason – they have been doing this quite literally since the invention of the DVR. They're well known for their cable DVRs and their history with the technology, but they also make OTA DVRs, and their products are excellent.

Tablo's claim to fame is that they were a cord cutting company from the start. Or, technically, Nuvyyo was a cord cutting company from the start, and they made a product called the Tablo – but they never use “Nuvyyo” on their stuff, and everything from their website to their ads says “Tablo” and not “Nuvyyo,” so it's confusing. Don't worry about it, though, because the point here is that they make really good OTA DVRs.

Channel Master has been in the over-the-air TV game for ages, so it's only natural that they also make products to help you record over-the-air channels. Channel Master has phased out some of their older and clunkier models and is getting ready to launch the Stream+, a device that has the whole cord cutting community pretty excited.

If you're a tech-savvy person, you may have realized by now that an OTA DVR is a pretty simple device. It's just a TV Tuner, a little computer, and a hard drive. As you might suspect, this means that you have some DIY and semi-DIY options for recording over-the-air TV.

For starters, you'll need a PC TV tuner like this Hauppauge model that we reviewed a while back.

They typically come with software, and sometimes that means basic OTA DVR functionality right out of the box. But unless you want to watch everything on your computer, your next step is to start thinking about servers.

There are various ways to set up free media servers and OTA DVR programs to get OTA content (including live and recorded content) onto other devices. But for simplicity and functionality, it's hard to beat Plex, one of our favorite media services.

If you're willing to pay for Plex's premium subscription service, Plex Pass, you'll get live TV and OTA DVR support. Run a Plex server on your computer with an antenna connected via PC TV tuner, and you'll be able to stream live and recorded OTA TV on any device running the Plex app. And since the Plex app is widely available for popular streaming devices, this makes things pretty simple!

The Power of Over-the-Air TV

36 thoughts on “How to Record Over-the-Air TV”