Netflix is the king of the streaming world, but it hasn't always kept its kingdom happy. Netflix recently moved to quash the use of VPNs by its subscribers. Previously, Netflix subscribers were able to use VPN and proxy server applications to circumvent Netflix's country restrictions: with the click of a button, users could jump from Netflix's small (but growing) British catalog to its more robust (but shrinking) U.S. catalog. Every country's content was available everywhere, as long as you had a little bit of tech know-how and a certain disregard for the letter of the law (and end user agreement)

Now, that's all changing. Netflix is cracking down in a big way, and some of its subscribers are pretty unhappy. Our sister site AllFlicks set out to find out just how much Netflix's rule changes could hurt the service. They asked 3,000 Netflix subscribers for their thoughts, pulling their sample from visitors to AllFlicks and to Reddit's /r/netflix.

The results? Netflix subscribers are not down with the proxy ban. A solid 65.0% of respondents said they had an unfavorable opinion of the new rules.

Here's a chart breaking down the results of AllFlicks' poll. It's clear that Netflix's decision is not a popular one among subscribers in AllFlicks' sample – roughly two-thirds of respondents opposed the new rules. 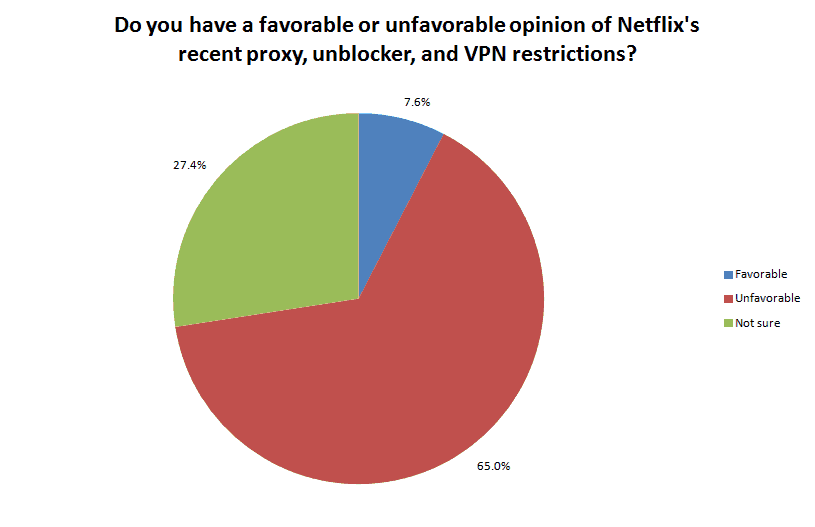 That's some serious dissent, but this finding isn't much of a surprise. Proxy and VPN use is a benefit to subscribers; banning it only helps Netflix. The fact that “not sure” was such a popular result suggests that perhaps many non-VPN and proxy users don't know what those things actually are. Only 7.6% of respondents could confidently say that they approved of Netflix's decision on VPNs. And on top of all of this, the survey sample likely skews towards VPN/proxy users. AllFlicks mines Netflix's catalog and produces a database that's sortable by all sorts of factors, including country – making it a great resource for Netflix users in general, but proxy users in particular.

So we have a very pro-proxy group on our hands. How far are they willing to go on this issue? Would they consider canceling Netflix entirely? AllFlicks asked them just that. A significant number said they had – but most agreed that cancellation was never on the table. 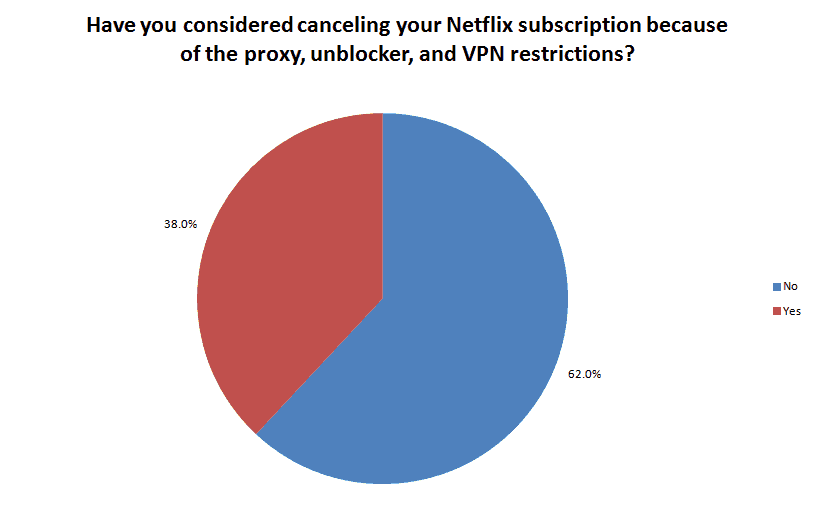 According to AllFlicks' results, 38.0% of Netflix subscribers have considered canceling the service over the new VPN restrictions. Taken at face value, that's a huge number – if more than a third of Netflix's subscribers actually did bail out, Netflix would be in very serious trouble.

But it's worth examining this number closely. Thirty-eight percent of subscribers considering cancellation is a far cry from 38% actually canceling. And we've already established that the sample skews tech-savvy, so these results are most important in considering what “power users” think of Netflix's new rules.

As you might assume, the overwhelming majority of the “yes” responses came from respondents who disapproved of Netflix's VPN ban. But even among the respondents who opposed the ban, only a little more than half said they have considered cancellation – 54.8%, to be exact.

Looked at this way, our data suggests that Netflix shouldn't be too frightened about the consequences of its proxy decision. Given the avowedly pro-proxy numbers in this sample, the number of respondents who actually considered canceling is pretty low. And if it's true that the Netflix subscriber base as a whole features fewer VPN users than the portion of the base that frequents Reddit and AllFlicks – something that seems nearly certain – then these numbers would only shrink when looking at the entirety of Netflix's massive subscriber base.

But what if we look at these numbers again with geography in mind?

We've argued above that Netflix's overall subscriber numbers aren't likely to take a huge hit over the VPN issue. But what about specific groups of subscribers – like subscribers in countries outside of the United States?

Netflix started in the U.S., and its American streaming catalog its still its largest (though the company is making efforts to even things up). That hasn't kept Americans from using VPNs, but it does seem to have an impact on how precious the option is. Among American respondents, 55.1% disapproved of the VPN ban – a bit less than the 65.0% of overall respondents that felt that way. But the bigger drop-off came in the second question, where just 19.4% of respondents said they'd consider canceling. U.S. subscribers seem less likely to care about VPNs, and those that do are far less likely to consider them a make-or-break part of the Netflix experience.

For international subscribers, however, VPNs are a big deal. Among non-U.S. respondents, 72.8% disapproved of Netflix's regulations. And 52.8% of international respondents said they were considering ending their Netflix subscription (and that number includes respondents on both sides of the VPN question). Breaking down the numbers this way, we see something that should alarm Netflix: a majority of subscribers considering cancellation.

These numbers still come from a tech-savvy self-selecting group, but they suggest more of a problem for Netflix. There's a chunk of users out there that view VPNs as an essential part of the Netflix experience – presumably, they're using those VPNs to access large catalogs like the one that is keeping U.S. subscribers relatively complacent. Netflix would be wise to keep an eye on their restless subscribers in countries with smaller catalogs.