Half of all employees are streaming TV shows during work

Remote workers say they watch an average of 5 hours of TV each week, and onsite workers are also streaming during shifts

The explosion of streaming services combined with the ever-increasing processing speeds of smartphones means that most people have the ability to watch their favorite programs anywhere with an internet connection. But does having the ability to stream “Saved by the Bell” at school or watch “The Office” at the office mean that we should?

Portable technology and changing workplace dynamics during COVID-19 have blurred traditional lines between professional, personal, and play times. According to new research from Cordcutting.com, about half of remote and onsite workers are actually watching TV on the clock, and even more are surfing social media and shopping online. But many employees reported these activities help their productivity and focus, rather than serving as distractions.

TV at work: who’s watching, why, and how much?

When work and recreation now often occur in the same space, how do employees separate the two? Many do not. We found that nearly half of Americans watch TV during work hours, and three-quarters of them do so without pausing. 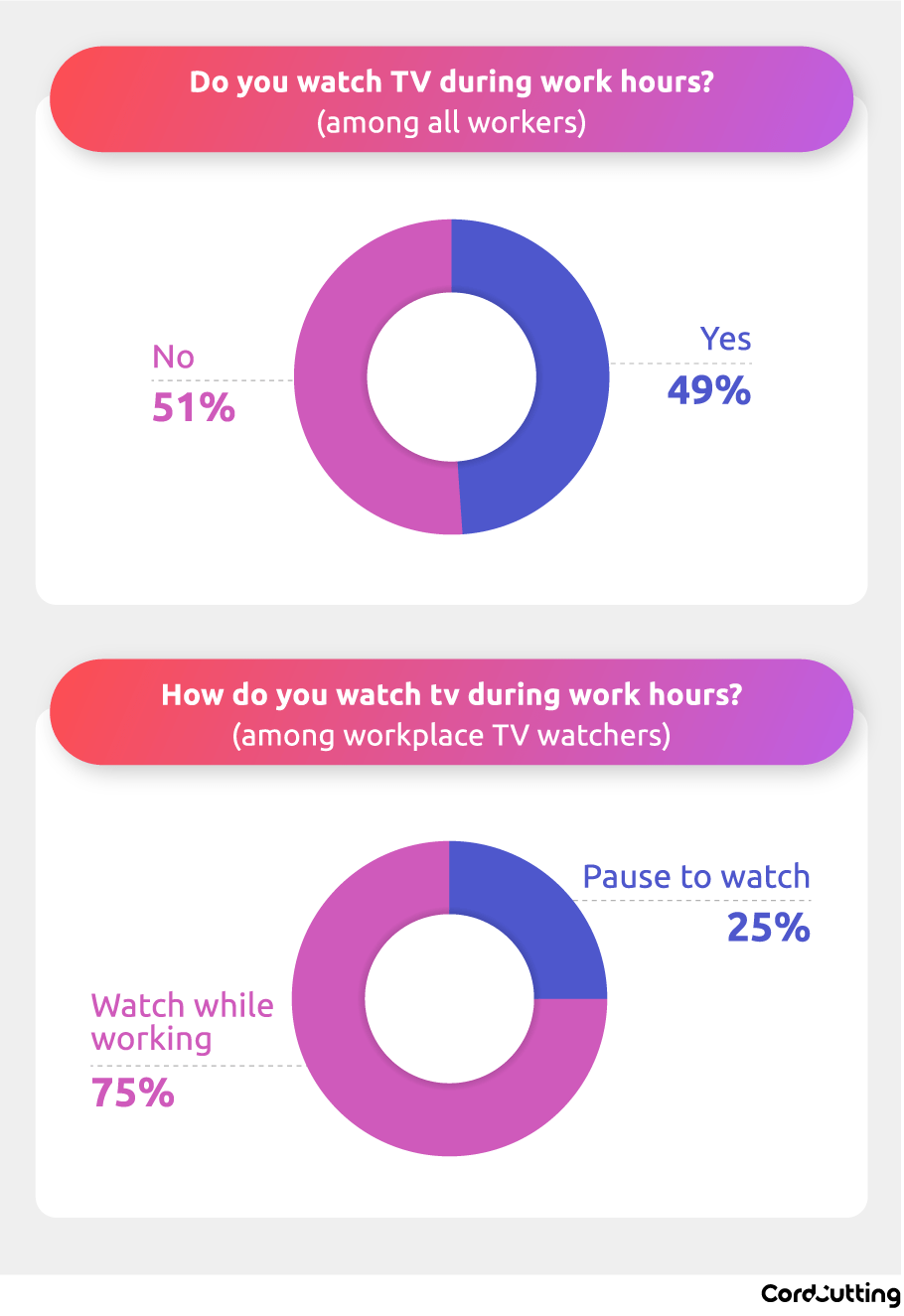 With streaming services allowing unfettered access to programming in any location, TV watching isn't limited to remote workers. Even people working in an office, factory, or restaurant are streaming shows, though at a lower rate than counterparts at home.

Remote workers (those who “always” or “sometimes” work from home) also tended to watch more hours of television during their workdays, with their median viewing time twice that of onsite employees. 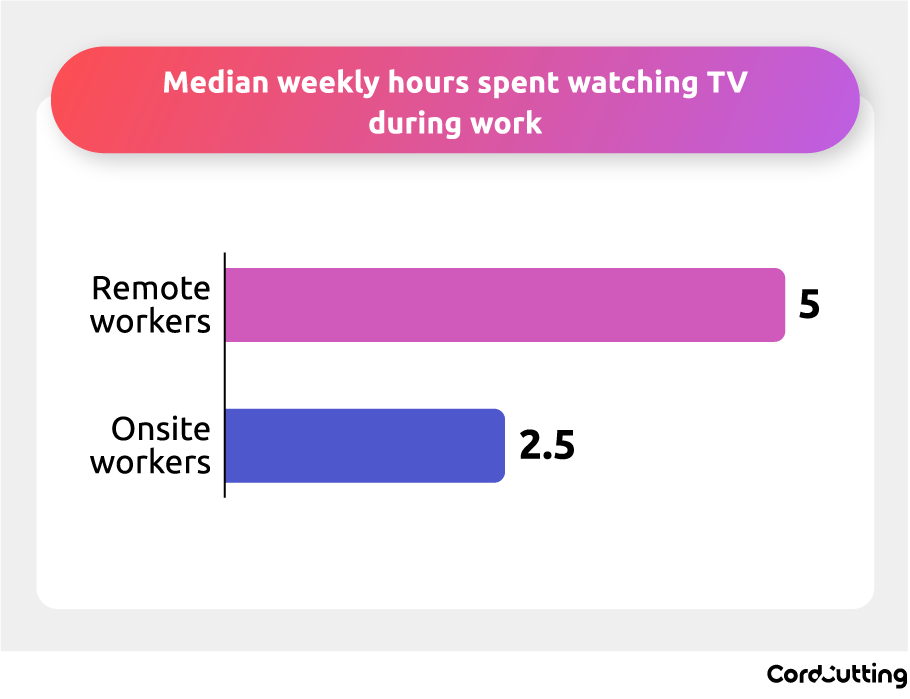 Additionally, people at home were more likely to keep working while their screens were on: only 20 percent of remote employees paused working to watch, compared to 40 percent of onsite workers.

Many respondents asserted that TV doesn’t interfere with their work, claiming the stimulation helps pass the time or even increases concentration and energy. Those working from home especially cite the benefit of background noise, while those in the office are more likely to watch when they run out of work to perform.

Employers may disagree that watching television enhances performance. Around two in three workers in our research said their employer used some sort of method to monitor their productivity, and workers under such scrutiny were slightly less likely to tune in to TV.

Age and tenure might prove better deterrents. Workday TV consumption consistently declined among employees who were older and more experienced in their companies. 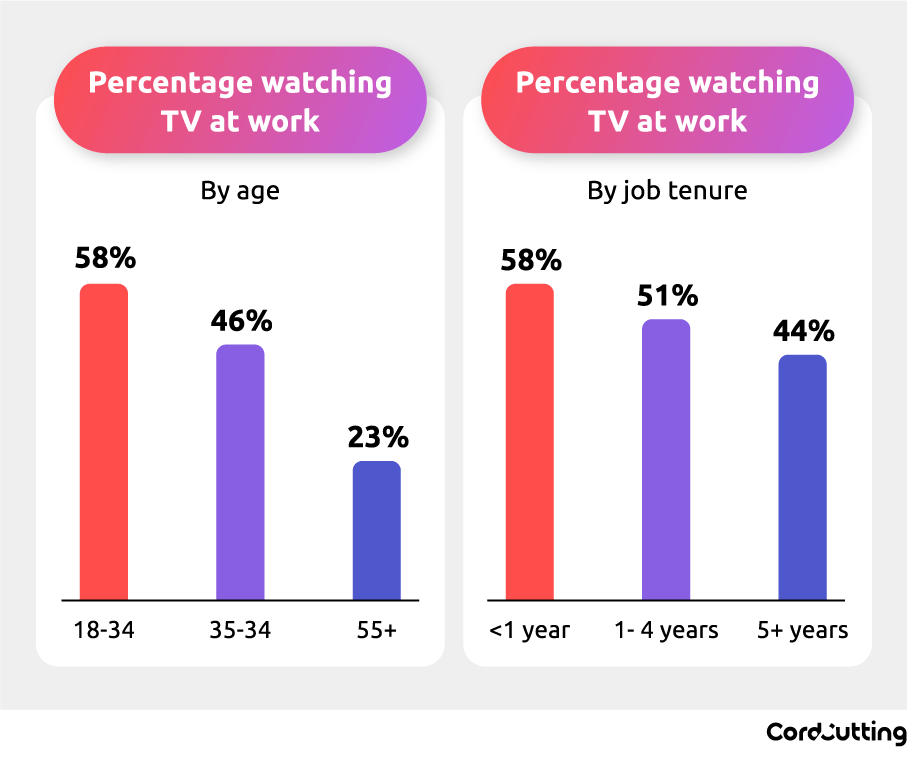 But one interesting number suggests watching television might give workers a boost up the corporate ladder: 56 percent of those watching 11 or more hours of TV at work each week had received a raise or bonus in the past year, compared to 47 percent of those who watched no TV during the workweek.

Perhaps those promoted were efficient workers who only turned to television after finishing tasks quickly, or received desperate offers designed to retain staff in a tight employment market. Then again, it could be that endless hours spent watching Succession taught them to master the board room.

What are people watching at work?

While the same proportion of men (49 percent) and women (50 percent) watched television during working hours, what they watched varied noticeably. Men were far more likely to view YouTube videos, while women were more likely to watch shows on streaming services.

Among those who used streaming platforms to watch TV on the clock, Netflix and Hulu had the most workplace watchers.

Comedy was the clear favorite category of content overall, as workers sought laughter to alleviate stress or boredom. Some relied on the soothing rhythms of news, documentaries, and sports, while others enjoyed saucier fare.

The individual shows mentioned by our study participants most often were: “Schitt’s Creek” (perhaps an inspiration to not lose one’s job and money), “Bob’s Burgers” and the “Great British Baking Show” (a hearty combo for midday lunch or snack breaks), and “The Office” (an uplifting reminder that at least one isn’t working at a place like Dunder Mifflin).

TV isn’t the only escape: other popular workday diversions

For a more complete understanding of modern workday activities and where television fits within them, our survey inquired about a wide range of activities undertaken during business hours.

Overall, 91 percent of respondents admitted indulging in some personal/recreational activities during work hours.

Online shopping and social media were even more popular workday diversions than TV.  In a testament to the state of the current gig economy, more than one in three people worked on their side hustle while on the clock at their main job.

Once more, we found those working from home took greater advantage of their freedom. Remote workers partake in non-work activities more often than those in the office, specifically watching TV, caring for children, or tending to household affairs.

Employees dissatisfied with their positions predictably strayed to non-work activities at higher rates than those content with their jobs. This predilection stands out most starkly in the increased number pursuing a side hustle and drinking alcohol on the job.

To Xfinity and beyond: the future of work reinvented

One priority of this emerging movement is greater work-life balance. Employees wish to tailor occupational requirements around their lifestyles and focus on productivity over hours spent chained to a desk.

This emphasis has manifested in personal activities invading traditional workday hours. Old school employers may bristle at the thought of workers watching TV, working out, or playing video games between 9 a.m. and 5 p.m., but those on the job insist these breaks boost mental health and ultimately aid productivity.

White-shoe firms laughed at creative startups that permitted flexible schedules and put ping-pong tables in the cafeteria. Now labor forces enthusiastically embrace such empowerment of individuality. Watching television on the job may be just the beginning in this shifting balance of power.

Cordcutting.com conducted an online survey of 750 Americans employed either full-time or part-time. 80 percent were full-time workers and 20 percent were part-time workers. Respondents were asked a wide range of questions to assess the nature of their employment situation, occupational disposition, and behavior during work hours with specific emphasis on media viewing habits.