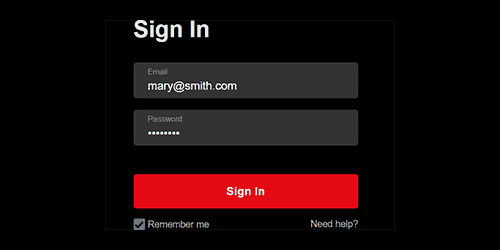 Cord cutting is cheap to begin with, but it's even cheaper when you're splitting the cost of your streaming subscriptions with family or friends. Password sharing is something that a huge percentage of streaming viewers do – a fact that HBO found out the hard way when their streaming service suffered huge outages thanks to password-sharing freeloaders.

Password sharing is extremely common, but it's not always clear if it's allowed. Some companies actively combat password sharing, while others advertise multiple user capabilities as features of their services. In this article, we're breaking down password sharing rules, features, and legality for four major streaming services.

Let's start with a tricky one. Because Prime is tied to a shopping account, this may not be a password you want to give out. Plus, Prime's terms of service explicitly forbid sharing the account – except under certain conditions.

Until recently, Amazon allowed members of the same household to share Prime's free shipping, but not its video content. “Other Amazon Prime membership benefits such as Prime Instant Video and the Kindle Owners' Lending Library can't be shared unless both accounts are ¢€˜Adults' in the same Amazon Household,” the old terms read. Under those terms, Amazon seemed to be saying that you couldn't share Amazon Prime Instant Video with your kids.

Amazon has since clarified and changed its terms. Amazon will allow you to link together profiles to create a “household” under their rules. Within a household, you can share video content with “child” profiles (four per adult account, with a maximum of two adult accounts per household).

So what if you're not in the same household as the person whose account you're sharing? Well, like the other companies on this list, Amazon hasn't shown a real willingness to actually track down and prosecute password sharers. That doesn't make sharing legal, or even strictly ethical, but it may help some users breathe a little easier. Prime also lets you watch on two devices at once. That's not a sign of approval for password sharing, of course, but it might as well be.

HBO had the dubious honor of being mentioned by name in this article's introduction. They managed to become the classic password sharing horror story when they failed to properly stream high-profile events like the Game of Thrones season premiere. HBO's mistake was to assume that their subscription numbers would accurately reflect the number of people logging on to view their content. Thanks to password sharing, the number of people tuning in was much higher than expected.

So what has HBO done to combat password sharing since then? Pretty much nothing. Instead, they just beefed up their streaming capabilities by partnering with MLB Advanced Media, making their service better at handling all of those extra viewers. Sharing an HBO account still isn't technically allowed: according to HBO GO's terms of us, the account is “limited to members of your immediate household only.” But it seems safe to say that sharing your HBO GO password won't land you in court. The company is making money and doesn't see any reason to go after its customers for the practice. So while you shouldn't necessarily be proud to share an HBO GO password, you should at least not be nervous.

Hulu doesn't like all this password sharing nonsense. Unlike Netflix, they don't offer any package that will let you stream on multiple devices at once. If you want to share your Hulu password, you'll have to hope that whoever you let into the fold doesn't want to watch at the same time as you do.

Hulu's terms of service make it clear that you are responsible for any “unauthorized third parties” using your account, as well as for any “members of your household.” The implication seems to be that anyone outside of your household is, by definition, unauthorized. The terms don't explicitly prohibit password sharing, though it's clear that Hulu isn't thrilled by the idea. You're not going to get caught sharing your Hulu password, but with their one screen limit, what's the point of doing so?

Of all the companies on this list, Netflix may have found the best way to monetize password sharing. Netflix accounts cap sharing by limiting the number of screens you can use at the same time. What's particularly clever is that Netflix offers multiple price points with different numbers of screens – users can choose between 1 screen ($7.99), 2 screens ($8.99), and 4 screens ($11.99). Netflix has also dropped a previous policy that forced users to “register” their devices and capped the number of devices per account, curbing password sharing. Netflix doesn't explicitly condone account sharing, but the company's actions speak volumes. For now, at least, you can share your Netflix password with impunity.

3 thoughts on “Hulu, Amazon, HBO, and Netflix Account Sharing: Is It Allowed, and Does Anyone Care?”