For Roku, your device is just a part of the experience. As Roku CEO Anthony Wood made clear during our interview with him, Roku sees itself as a platform company. They’re the “agnostic, unbiased” company, Roku says — the ones that make the independent platform that will run Google Play and Amazon Prime Instant Video equally well.

But, of course, Roku isn't just a platform company. They also make streaming boxes that compete directly with devices like the Apple TV and Amazon Fire TV. Nobody has been doing this longer than Roku, but does this “platform company” still have the edge when it comes to their physical products? We took a look at the new Roku 4 to find out.

Whenever we receive any freebies, we make a point to disclose it in our reviews. In the case of Roku, we received a free Roku 4 to use in our review. We also hopped on a call with some of Roku's spokespeople, so that they could give us an idea of what to expect. As always, we've kept this review as unbiased as possible.

The first thing you'll notice about the Roku 4 is that it's big. It's noticeably larger than the old Roku devices, though it is also fairly thin. We put some everyday objects in the photos below so that you can get a sense of scale. 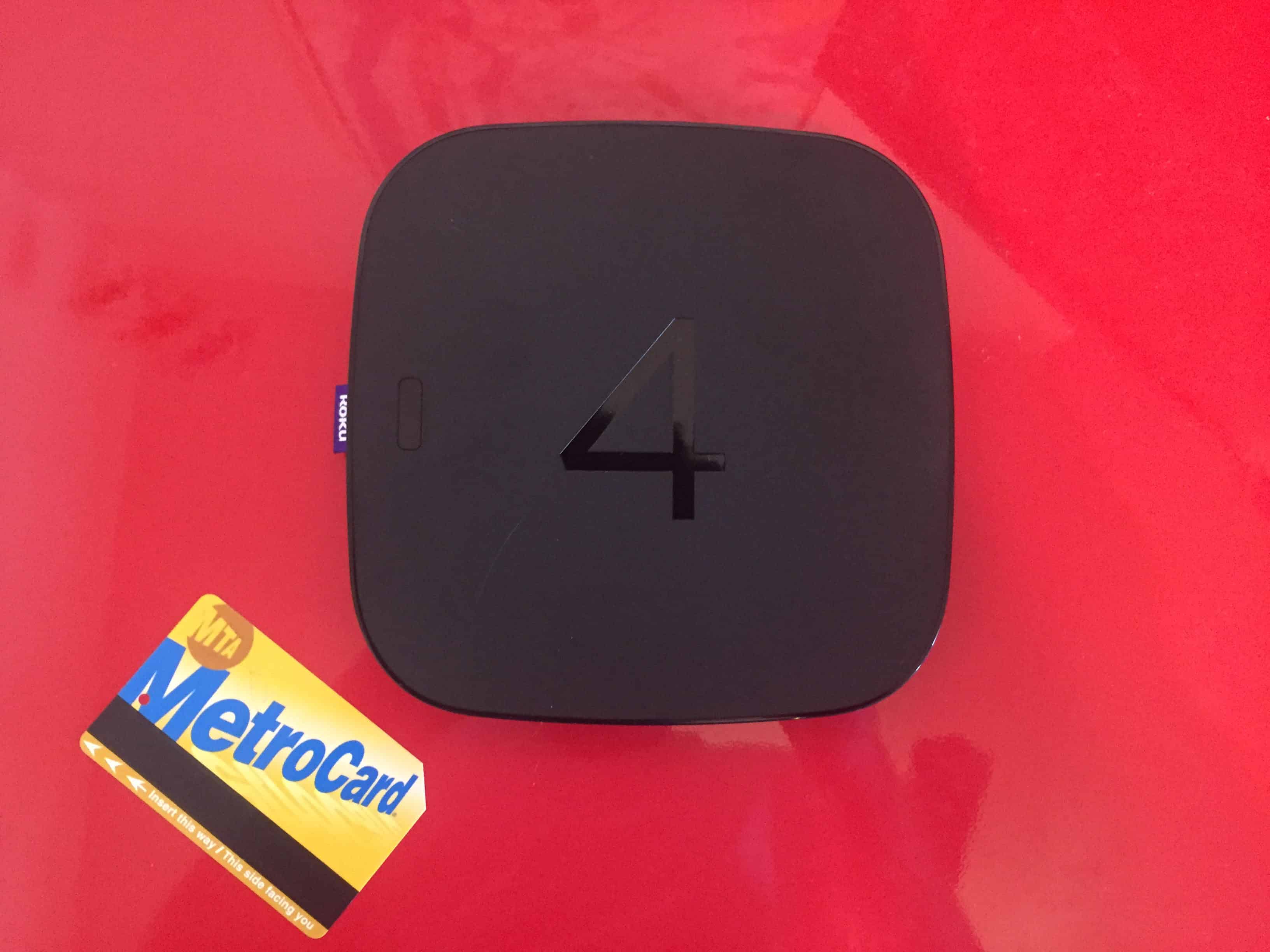 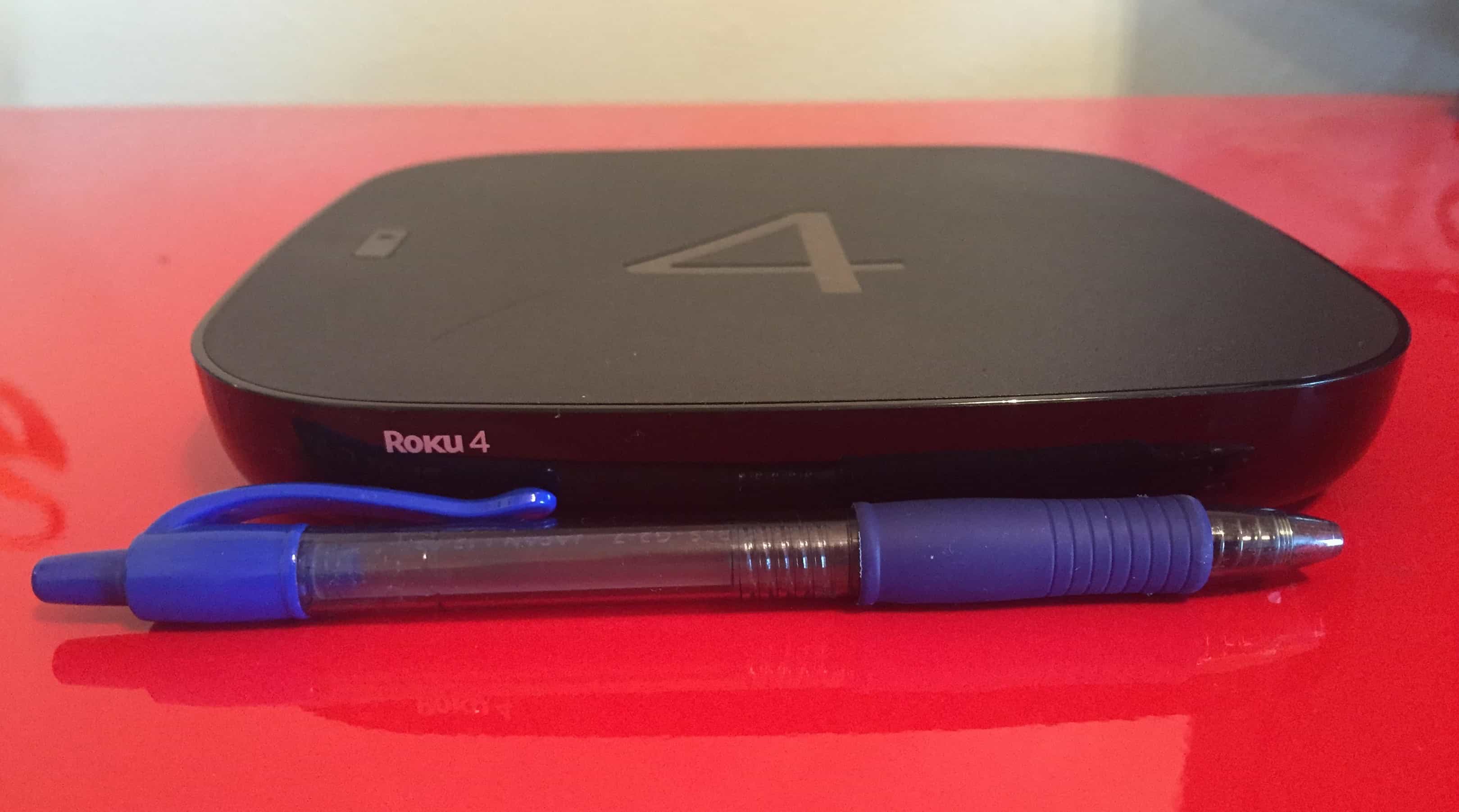 The on-board specs are pretty impressive, and the device runs well. You'll get 802.11ac MIMO Wi-Fi (which worked perfectly in our tests) and a quad-core processor. The Roku 4 is 4K enabled, which is great — though 4K isn't super common yet, it is certainly the wave of the future.

The Roku 4 has one USB port and an optical audio jack in addition to the HDMI and Ethernet jacks that you'd expect. The remote has a headphone jack for private listening, and it also has direct buttons for four major services (great if you use the services, kind of useless if you don't). The Roku 4 device has a remote locator button, too — press it and the remote makes a noise so that you can find it. Your faithful blogger has already made heavy use of this button.

The Roku 4 box doesn't include an HDMI cable, which is a bit annoying, considering the price of the device.

Some users have reported that the Roku 4's fan is loud. We could hear it during quiet spells, but it's not particularly jarring. At worst, it's comparable to the dull hum you'd hear from a new laptop or a video game system. Our device also got a little warm, but it never seemed to affect its performance. 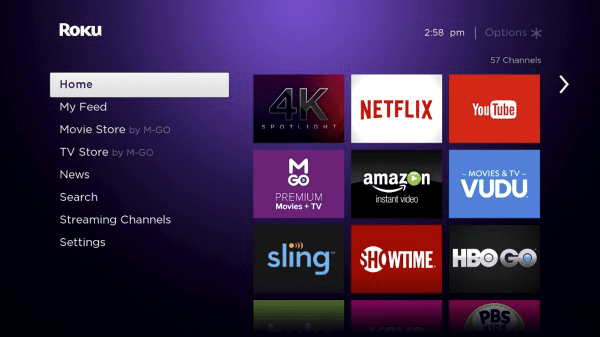 We mentioned earlier that Roku considers itself a platform company. That shows in the user experience. We found the Roku extremely easy to use.

The menus and layout are pretty straightforward, and the universal search is quite powerful. Roku's universal search utilizes voice control (though you can type if you'd prefer) and checks with 23 partner channels at once. The results are displayed by price, low to high. It's an unbiased way to find content, and it's very useful — particularly to power users who have accounts with multiple streaming and rental services.

There's also a mobile app for Roku. It's pretty competently put together, though we didn't find ourselves using it very often.

As you might expect, there are a few advanced things that are tougher to do with Roku: screen mirroring, checking emails, using social media, etc. The screenshot in this section came from Roku.com, because we couldn't find a way to take them ourselves. Some of these things are possible with private channels, but for the most part, Roku is content to be your media device, not a computer.

The look of the interface is pleasant, but not highly customizable. You can download “themes” that dress up the menus in different ways, and you can re-order your channels, but that's about it. We didn't think this was a big deal, but it could be a drawback for those who love tinkering with their devices.

The operating system is smooth, fast, and generally very reliable. It's worth noting that we found one way to freeze it. If you download a new channel, you'll get a split second between the download's completion and a little alert that tells you that the channel is now on your home screen. If you hit the back button at that second in between the two notifications, you'll move one screen back before the second alert pops up, and then you won't be able to move your cursor.

That said, there's a reason that we're able to tell you about this quirk in such detail: it's the only one we found. Other than this, the system worked seamlessly.

Roku's reps were quick to tell us that Roku users stream more content than users of any other device (this statistic being based on active accounts, since that's the most reliable measurement). After using the device, we find that pretty easy to believe. Flipping around and starting content is quicker and easier than it is with, say, Chromecast, where you have to make use of another device, sling it up on the screen, and all that.

Because of its simplicity, the Roku would be a great choice for families (in fact, family usage may also help explain Roku's “most streaming” statistical advantage). It's also a great choice for anyone who wants a simple but powerful streaming device.

One of Roku's main claims to fame is its huge channel selection. As we mentioned earlier, Roku has managed to position itself as a fairly agnostic platform. While Amazon Fire TV has a vested interest in keeping Google Play unusable on its devices and Apple TV has the same incentive regarding Amazon Prime Instant Video, Roku can and does offer very reliable channels for all of those services. Roku's channel selection has hit over 3,000, and it includes all the big apps: Netflix, Hulu, Sling TV, and more. 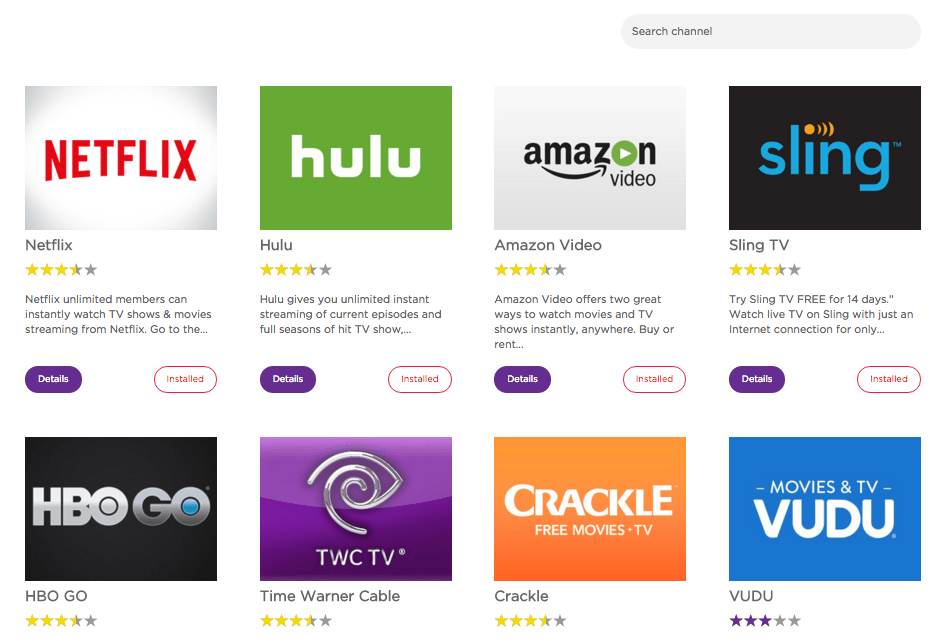 We rather enjoyed the selection of music channels, too. You'll be able to link accounts from major music streaming services like Spotify, and there are some cool little third-party apps too. For instance, we made heavy use of a channel called Dead Shows, which streams free Grateful Dead concert recordings from the archive.org site. Groovy.

Adding channels is easy, because you can do it right from your computer. This makes it simple to set up the device, because you can do all the work with your keyboard and mouse before switching over to the Roku. You can also, of course, add channels directly from the Roku. They have a pretty good in-device channel store, with channels sorted by genre. We used both, and also downloaded private channels. All of these methods were quick and easy.

We tried all of the major channels, many of the smaller ones, and even some private channels. We didn't have any serious problems with any of them. Sling TV had to re-load occasionally, and that was about it. Sports streaming apps (we tried WatchESPN, MLB.tv, and NHL GameCenter Live) all worked very well, too. This was true on Wi-Fi and wired connections alike.

The 4K selection is small, but growing. It's worth noting that the Roku home screen and menus are in 1080p, not 4K. If you're specifically looking for 4K content, Roku has a default channel called 4K Spotlight that will help you find some.

The Roku 4 impressed us with its smooth streaming, huge channel selection, and very user-friendly interface. It's a simple but near-perfect device, perfect for families and streamers that want a no-hassle box that works with all of their streaming services. It has very few drawbacks, and almost none that affect the average streamer. We highly recommend the Roku 4.