The holidays are a wonderful time of year, but they can be pretty darn stressful, too. Personally, I like to unwind from the holiday stress by watching Christmas movies. And if you're looking for a low-stress holiday film, you could do a lot worse than Christmas with the Kranks — a film about people who come up with a very inadequate solution to the stresses of the season. For the uninitiated, Christmas with the Kranks is based on a novel called Skipping Christmas, and it's about a couple who — you guessed it — decides to skip Christmas. This is a movie that's worth watching at least once a year, but that doesn't mean that you'll always find it on your favorite streaming service. Let's track down the best way to stream Christmas with the Kranks, so that you don't have to skip Skipping Christmas this year. 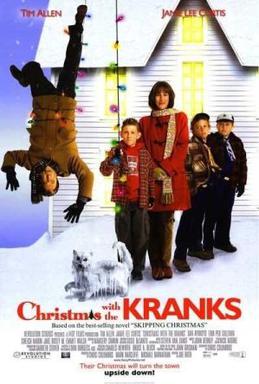 Where can you stream Christmas with the Kranks?

Wouldn't it be nice if every movie you ever wanted to watch was on just one service? Unfortunately, Santa hasn't delivered that particular gift just yet, and he probably never will: Even Santa doesn't want to mess with the corporate deals that control which movies you can watch on which streaming services. Until then, there's no telling which streaming service Christmas with the Kranks will end up on each holiday season — or even where it will be available, since different even the exact same services may have different streaming catalogs available in different countries.

Luckily, we are here to keep track of it for you. Consider this your early Christmas present!

Where to Watch Christmas with the Kranks Online


Pro Tip: With a VPN, you can unlock Netflix in the UK to stream Christmas with the Kranks.
ExpressVPN is our #1 Pick.

What if Christmas with the Kranks Isn't Available in Your Country?

So what then? If you log onto Netflix, the service will use your IP address to figure out where you are, and it will deliver the streaming catalog that goes with your country. The same goes for other streaming services, like Amazon Prime Video. So even if someone abroad can watch Christmas with the Kranks on a service like that, you could be out of luck — unless, of course, these streaming services were to think that you were somewhere else.

This is where VPNs come in. To be clear, VPNs are good for a lot more than just hiding your location (and we recommend them primarily for their privacy and security benefits). But there's no denying that location-shifting is part of the reason VPNs are so popular — or that one of the reasons that users like to shift their location is to get around restrictions like streaming services' region-locked libraries.


Did You Know: VPN's can make it look like you are in another country? ExpressVPN is our top-rated VPN that will allow you to stream Christmas with the Kranks on Netflix.

Why I Love Christmas with the Kranks

However, I like it! It's straightforward and often funny, and when it's not funny (which is also pretty often), it's endearingly cheesy and earnest. The movie's faith in its own spirit makes it a pretty great Christmastime watch, even if it won't be topping any AFI lists.

Christmas with the Kranks is based on the novel Skipping Christmas, which was penned by the novelist John Grisham — a guy better known for legal thrillers (some of which have also been made into very good movies). Tim Allen and Jamie Lee Curtis star, while Dan Aykroyd gets a supporting role. Christmas with the Kranks is the kind of harmless movie that you'd put on in the background or watch with the whole extended family. That's all it is, but it does a great job in its role. View the movie trailer below:

There's still time before Christmas to watch some more of your favorite Christmas movies. If you're looking for Elf, for example, I can help you there (and you have great taste, by the way — I love Elf).

And if you're a die-hard fan of Die Hard, which is absolutely a Christmas movie? Well, we have you covered there, too.

And if you'd rather just watch whatever's on TV — which will surely include Christmas with the Kranks, by the way — then you should check out some of our favorite live TV streaming services, like YouTube TV and Hulu + Live TV.

One thought on “How to Stream Christmas with the Kranks Online”