The media center app wars are in full swing these days, and we couldn't be happier about it. Cord cutters now have a range of solid options for organizing and viewing their media files or streaming video, and that's certainly for the best. In the past, we've broken down the differences between Plex and Kodi – two of the most popular media center apps on the market today. In that case, the differences were pretty clear. But what about Emby, a competitor app that sets out to do pretty much the exact same thing as Plex?

Like Plex, Emby has a server-client setup. you download a program on your computer, set up a server, add your local media, and then install apps on other devices. With the Emby app on your other computer, phone, tablet, streaming box, or any other device, you can stream all of the media files that you have on your server.

There are a ton of similarities between Plex and Emby. They're both free with paid tiers, they're both client-server programs, and they've even both got cool logos. But there are pros and cons to using one or the other, and we're here to take a look at those. This is the Plex vs. Emby showdown.

The most striking advantage that Plex has over Emby is in user experience and ease of setup. Plex is deliberately designed to be as simple as possible, which (as we'll mention) limits its higher-level functionality, but also makes it a breeze to set up.

By contrast, the Emby setup process is a little more intensive. For instance, take a look at this set of instructions for installing an Emby server on a Mac:

None of the steps are particularly hard, but they definitely ask more of a user than Plex's server, which you pretty much just download and run. Tinkering around with the Terminal is something that might turn off casual users.

The difference is further evident in the user interfaces. Plex's just seems a bit cleaner and tidier, an easy-to-use media center for fans of Apple, Roku, and other just-works operating systems. It's an approach that's well-suited to the mission – this is an app for relaxation and entertainment, after all.

The Plex vs. Emby dichotomy kind of mirrors the Plex vs. Kodi war – in each case, one program is more streamlined and easier to use, while the other is clunkier and more customizable (not to mention open-source). But the Plex vs. Emby debate is more interesting in a way, because unlike Kodi (which, in our view, is best suited for use on a single device), Emby shares Plex's goal of being a multi-platform, server-client media center. As we mentioned in the introduction, Plex and Emby both seek to solve the same basic problem: how to turn local content into streamable content.

So, if it helps, you can think of Emby as a Kodi-lover's Plex. It offers more ways to customize your experience, and a few more high-level options – and, as we'll see in a moment, the two apps can work as a team. If you want to be able to tinker with metadata and tweak the way everything looks, you want Emby. 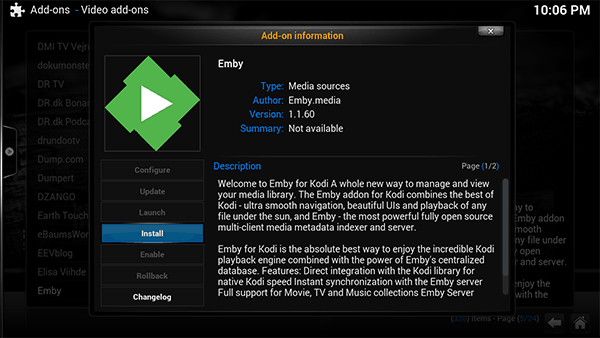 Unlike Plex, Emby plays very nicely with Kodi, which means that you can integrate Emby's client-server functionality with your Kodi setup. If you're the kind of user who already likes Kodi and enjoys tinkering with settings and add-ons, then you probably won't have much trouble setting up Emby's add-on and enjoying the best of both worlds. It's true that Plex has an add-on too, but it's not as clean of a solution, since it's not fully integrated into the Kodi database (which means that add-ons you have installed for Kodi won't affect the way your media looks in Plex).

Does Emby's increased functionality make it worth its ease-of-use shortcomings? In our opinion, not quite. But for die-hard Kodi fans, the equation is changed a bit. It's a matter of personal preference, one that's guided by your level of tech savviness and patience.

To put it simply, Plex and Emby are two similar programs that are designed to suit needs that are almost exactly the same, but their small differences lead to a pretty clear divide in their target audiences. Emby is for the power-users, the Kodi users, and the people who are comfortable trading clean interfaces and easy setup for increased functionality. Plex is for the set-it-and-forget-it crowd, the people who want their entertainment to work right out of the box and don't care about Kodi and its add-ons.