Even in a pre-COVID world, Americans loved streaming. In February, Nielsen reported that about one-fifth of all hours spent watching TV were via streaming platforms, like Netflix, Hulu, Amazon Prime Video and Disney+.

As stay-home orders and quarantines began to take hold across the country in late March, streaming surged — 85 percent more content was streamed in March 2020 compared to March 2019, and binge-watching increased by about 25 percent from the weeks before quarantine began.

But as the financial crisis continues to deepen and increasing numbers of Americans are looking to eliminate unnecessary costs from their budgets, premium-tier streaming services may be on the chopping block for many.

According to a New York Times/Mint analysis published this year before the coronavirus pandemic, the average American was spending $170 per year for streaming TV services, an increase of about 31 percent since 2017.

While some platforms like Netflix and Disney+ don’t offer ad-supported options for viewing their content, other popular services, including Hulu and CBS All Access, knock a few bucks off the monthly price in exchange for rolling ads before, during or after shows.

We wanted to understand just how different the viewing experiences are for those who see ads associated with streaming shows and those who don’t — and help folks who might be on the fence make some decisions about whether shelling out even more money for streaming is really worth it. So we watched dozens of hours of content, including videos, shorts, TV shows and movies, on CBS All Access, Crackle, Hulu, IMDb TV, Quibi and YouTube Premium, all of which offer on-demand streaming content with ads and four of which have ad-free tiers. 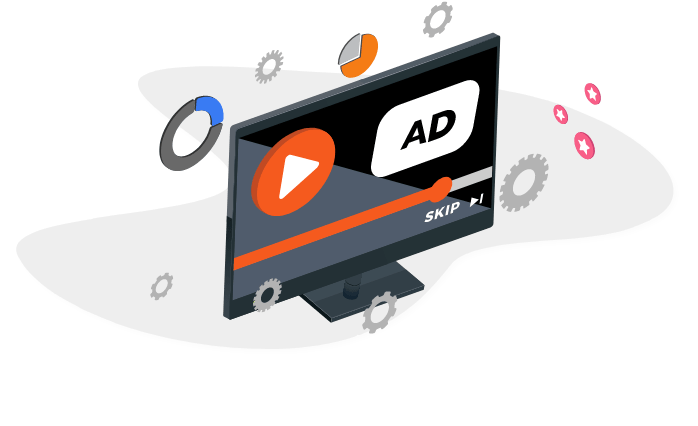 Read on for our full analysis, but check out our key findings:

In traditional television, viewers will usually see about eight minutes of ads during a 30-minute show, meaning the actual content is about 22 minutes long. Similarly, an hour-long show will usually come with about 42-45 minutes of content and the rest will be ads.

Generally, streaming platforms cut this time down considerably. Even free services like Crackle and IMDb TV, neither of which offer a paid version, offer shows with fewer and shorter commercial breaks.

For example, this ratio is highest for new-run shows on CBS All Access, with typical episodes of the half-hour comedy “Mom” showing about five minutes of ads. While this is relatively high for streaming, it still lets viewers cut about three minutes of ad time compared to watching the show live on TV. Additionally, “Mom” is still on the air, unlike some of the other shows available on the platform, like “CSI,” which averaged about 17 percent of ads to content. 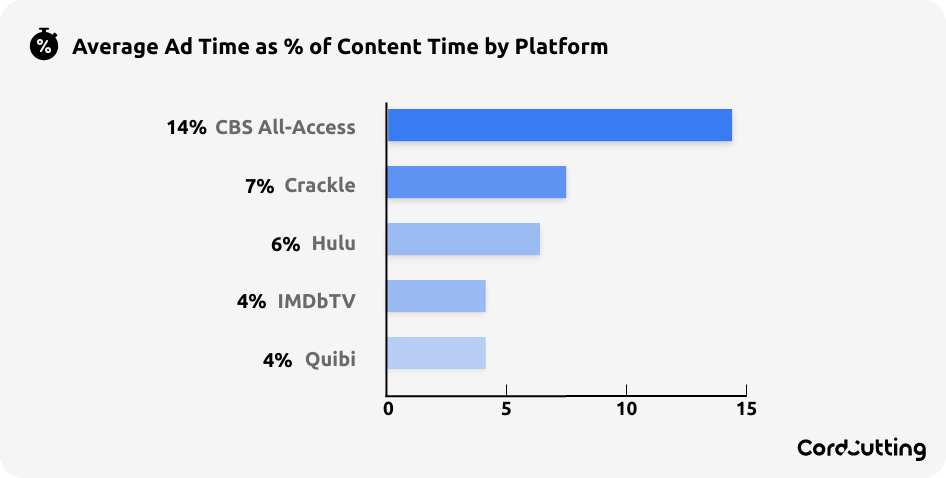 Not all of these platforms will allow users to drop this time to zero percent, though, as Crackle and IMDb TV do not offer non-ad-supported versions. Generally, the ads on these sites aren’t terribly intrusive, but for viewers who want to watch longer content, such as hour-long reality or drama shows or even movies, the interruptions can quickly add up.

For example, we watched two iconic 1980s films, “The Big Chill” and “Stand by Me,” the first on Crackle and the second on IMDb TV. “Stand by Me” has a running time of 1:29, which isn’t that much more than the length of an episode of a prestige drama, and we saw only a couple of minutes of ads. Compare that to “The Big Chill,” which is considerably longer, about 1:45, and which was interrupted by almost 13 minutes of ads, with breaks sometimes coming in the middle of scenes.

Still, watching these movies on a streaming platform will almost certainly be less time- consuming than checking them out whenever they happen to be on regular TV, where ad time would probably double — at least. A movie the length of “The Big Chill” would normally require a programming slot of about 2:30 or even three hours, giving the channel a chance to show a ton of ads.

Three of the six streaming platforms we analyzed have a two-tiered structure in which those who choose to can pay to have the ads taken out entirely, and those costs range from about $8 per month to $12. Additionally, YouTube Premium, formerly YouTube Red, costs $12 per month but does not have an ad-supported option. The other two services, Crackle and IMDb TV, are free for all users but don’t have ad-free versions.

Across the six platforms, we saw an average of about three minutes of ads per hour of content we watched, with the CBS All Access leading the way with more than five minutes per hour. Hulu’s ads-to-content ratio was the lowest. 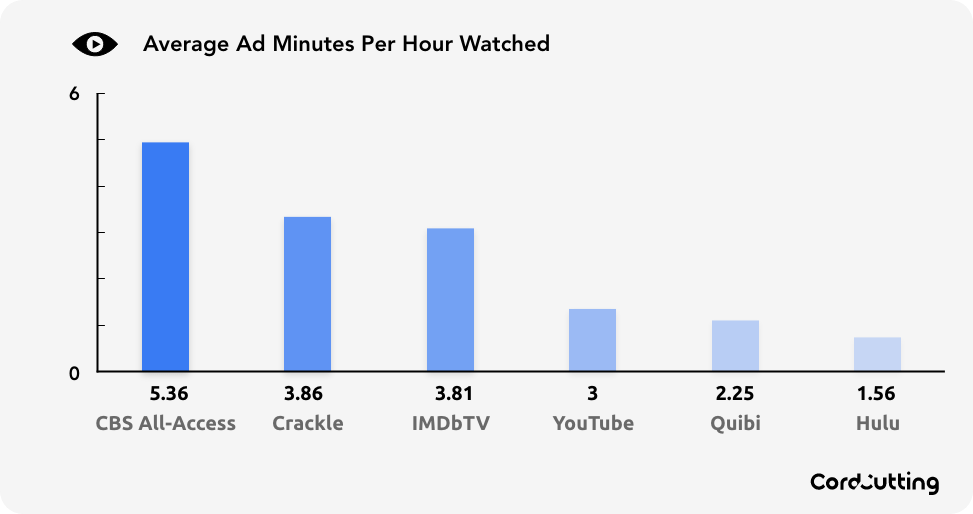 It’s notable that Hulu’s ad play was less intrusive than what we saw on Quibi, which is a struggling new streaming platform known that only offers original, short-form content, or quick bites. Most episodes are between five and seven minutes long, and they start with an ad before the show that’s usually only about 10-15 seconds. But for curious new viewers who want to binge the entire run of, say, “Reno: 911,” the revival of a cult parody show, or the film serial “Most Dangerous Game,” binging will let the ads pile up, and by the time a viewer watches about an hour of Quibi content, they’ve watched more than two minutes of ads.

Generally, these platforms have pretty different views on pricing. Quibi is about $5 per month for the ad-supported version ($4.99, to be exact), while both Hulu and CBS All Access are $6 per month with ads. Not much difference there, but consider their respective prices once you remove ads: Quibi is $8, CBS All Access is $10, and Hulu is $12.

But how do these platforms compare when we add in how much time a typical user will spend watching ads, and how can viewers decide if the ad-free versions are worth it for them? While this depends on how much content the individual in question watches, we imagined an average user watches 20 hours per month on a platform. 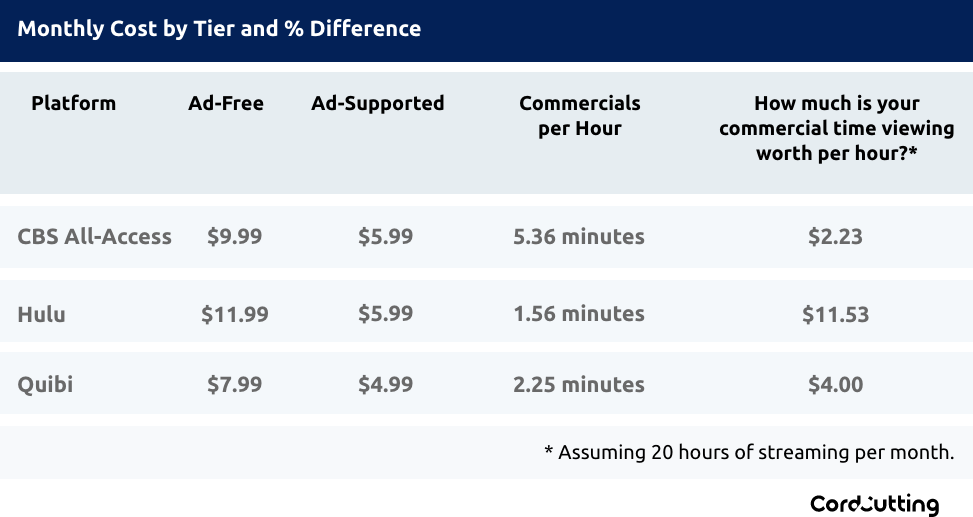 Our analysis assumed less than an hour per day of streaming, but binge-watching can really wrack up the minutes. Watching the entire run of “Modern Family” on ad-supported Hulu will cost you about 16 hours of ads, all told, while a show like “Survivor,” which is on its 40th season, will entail watching about an hour-and-a-half of ads per season on ad-supported CBS All Access. Pay for the ads to be removed, and that’s more time to spend taking Wikipedia deep-dives on what happened to these contestants after the show ended.

On the other hand, newer shows may be less attractive when it comes to paying to remove ads. “Star Trek: Picard” recently finished its first season on CBS-All Access, a 10-episode run with about one hour total of ad time.

Other originals like Hulu’s “The Handmaid’s Tale” often run with little to no ads regardless of the tier. We watched several episodes of the show across all three seasons, and the longest ad we saw was only 30 seconds, coming before the show started. Other acclaimed Hulu shows also ran with little to no commercial interruptions in our watches, including “Shrill” and “PEN15,” which often had no ads, or 30-second spots at the beginning of shows, and our watch of the network’s new animated series “Solar Opposites” encountered no ads at all. 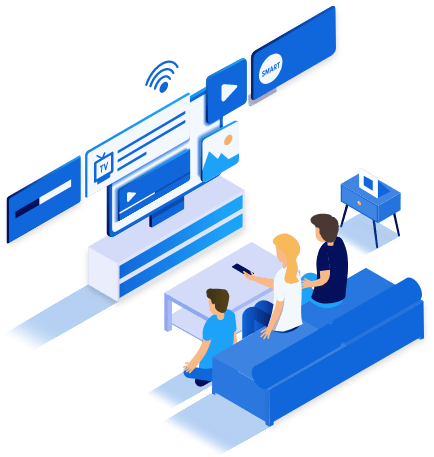 While our analysis has focused on TV shows, it’s pretty clear that a successful streaming platform today needs to do a lot of things well. For many users, that includes not only different types of TV programs, but films, whether that’s animation, action, drama, documentaries or more.

Three of the six platforms we analyzed show movies alongside TV shows, but the experience was quite a bit different depending on the platform. We’ve already discussed the films you can watch on IMDb TV and Crackle, but Hulu offers movies as well, and we watched a total of three on the platform (“Parasite,” “Misery” and “Booksmart”), none of which came with commercial interruptions in the ad-supported version. Quibi’s film selection, as mentioned, consists only of original serial-type films, shown in scenes of five to seven minutes, and CBS All Access doesn’t have movies, at least not yet.

Cordcutting.com explores streaming media in America. Our research team covers consumer purchase behavior, trends and media consumption in the 21st century. We help Americans find the best streaming TV services by reviewing and comparing every streaming TV service, what it offers and how to purchase it at the most competitive price.