Subscription Mooching in 2021 88 Million “Borrowed” Accounts in the U.S., Costing Netflix and Others $4 Billion+

Have Americans continued to embrace streaming entertainment over the past year, or was our national fixation with “Tiger King” just a pandemic-related blip like our frantic bread-baking? As a follow-up on research we’ve conducted regularly over the past few years, we asked U.S. adults which streaming TV services they watch, which they pay for, and which ones they “mooch” from others.

Streaming services like Netflix have started to take action against streaming “moochers”, and other platforms may begin to take notice as well. So, we’ve estimated how many people are sharing subscriptions across America to quantify just how much money the major streaming services are likely leaving on the table.

Here’s a look at some of the most interesting findings:

Who Is Streaming & What Are We Watching?

Our analysis found that the number of U.S. adults who watch streaming services sits at about 214 million, which is an increase from about 168 million in 2020. That also means that only about one in five people over the age of 18 aren’t watching any streaming content. (Interested in how we arrived at these figures? The methodology section at the bottom provides a detailed explanation.) 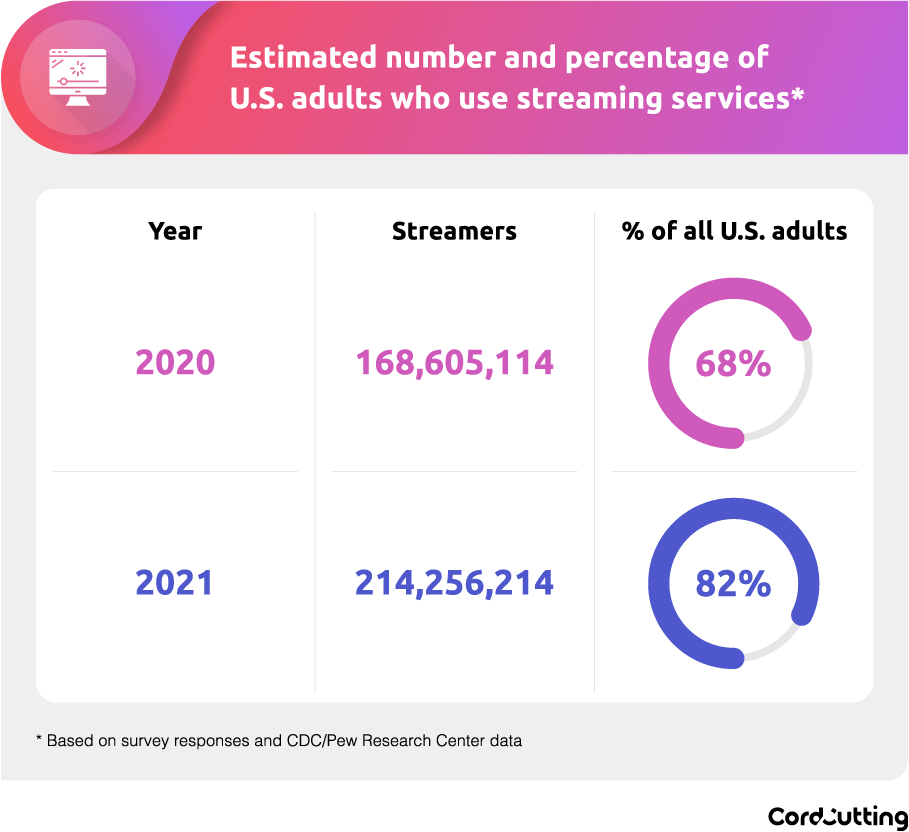 What accounts for the huge increase in streaming? Is it all due to COVID-19? While our research didn’t ask that question specifically, there can be no doubt that people streamed more content in 2020 than they otherwise would have.

In the early days of the pandemic, one report suggested that global streaming service subscriptions would get a boost of about 47 million accounts. And ratings company Nielsen reported that Americans in 2020 streamed more than 57 billion minutes of “The Office,” the beloved workplace comedy that went off the air almost a decade ago. (That’s 156 million minutes of Michael Scott’s cringe-worthy jokes per day.)

Other than “The Office,” what are we watching in all those hours of streaming?

Netflix continued to be the most popular platform among the streamers in our survey, with 90 percent of people who stream watching that particular platform. This level of viewership for Netflix has remained fairly consistent over the past few surveys.

HBO Max is the newest entry in the field and has the lowest overall adoption rate. Our research in 2021 excluded two new entrants (Discovery+ and Peacock) and one rebranded service (Paramount+, formerly CBS All-Access).

Still, the more established platforms have a clear advantage, though some have made huge gains in a few short years.

Netflix and Amazon Prime Video remained fairly consistent, each moving by a couple of percentage points at most, and Hulu inched up to 60 percent adoption among streaming viewers.

There were some generational differences, though Netflix remained at the top for all age groups. Its lowest viewership rate was 74 percent among people over 60. HBO Max was last for all age groups except those over 60, who prefer it very slightly to Hulu.

While streaming is continuing to increase in popularity, the majority of people aren’t yet ready to give up their cable or satellite subscriptions. That said, the percentage of people who are streaming-only viewers rose to about 41 percent, an increase over the 34 percent rate from 2020.

On average, only about 60 percent of people are paying for their own streaming subscription, but this varies considerably depending on the platform in question.

Compared to 2020, self-paying has risen for all platforms except Hulu, which saw this number fall by a couple of percentage points. And HBO Max, which came out in May 2020, was not included last year. Platforms have remained remarkably consistent over the past couple of years when it comes to streamers who pay for their own logins. 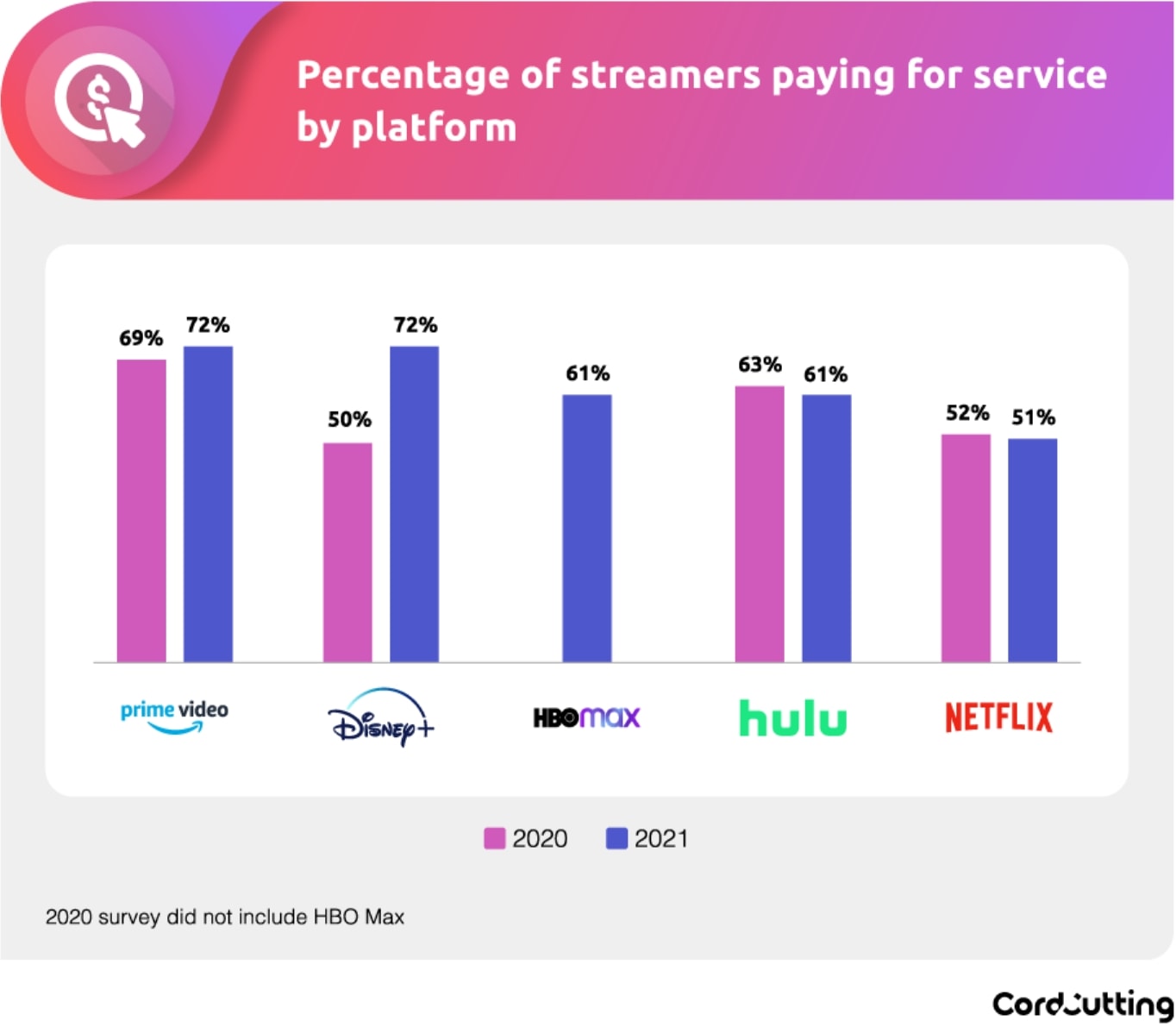 Continuing a trend from previous years, Amazon Prime Video has the highest rate of people paying for their subscription, though this is certainly related to the fact that the streaming service is included in Amazon Prime delivery subscriptions. Our survey does not specify standalone Prime Video subscriptions, but independent investigations indicate that this group is a small fraction of all Prime subscribers.

Many others watch subscriptions paid for by another member of their household, like a significant other, parent, sibling, or roommate. Far fewer people are doing what we’ve lovingly referred to as “mooching,” or using a subscription from someone they don’t live with.

This percentage is pretty low for all platforms (an average of about 14 percent), but it’s highest for the two newest platforms we asked about (Disney+ and HBO Max). Most platforms have seen this rate fall over the past few years. 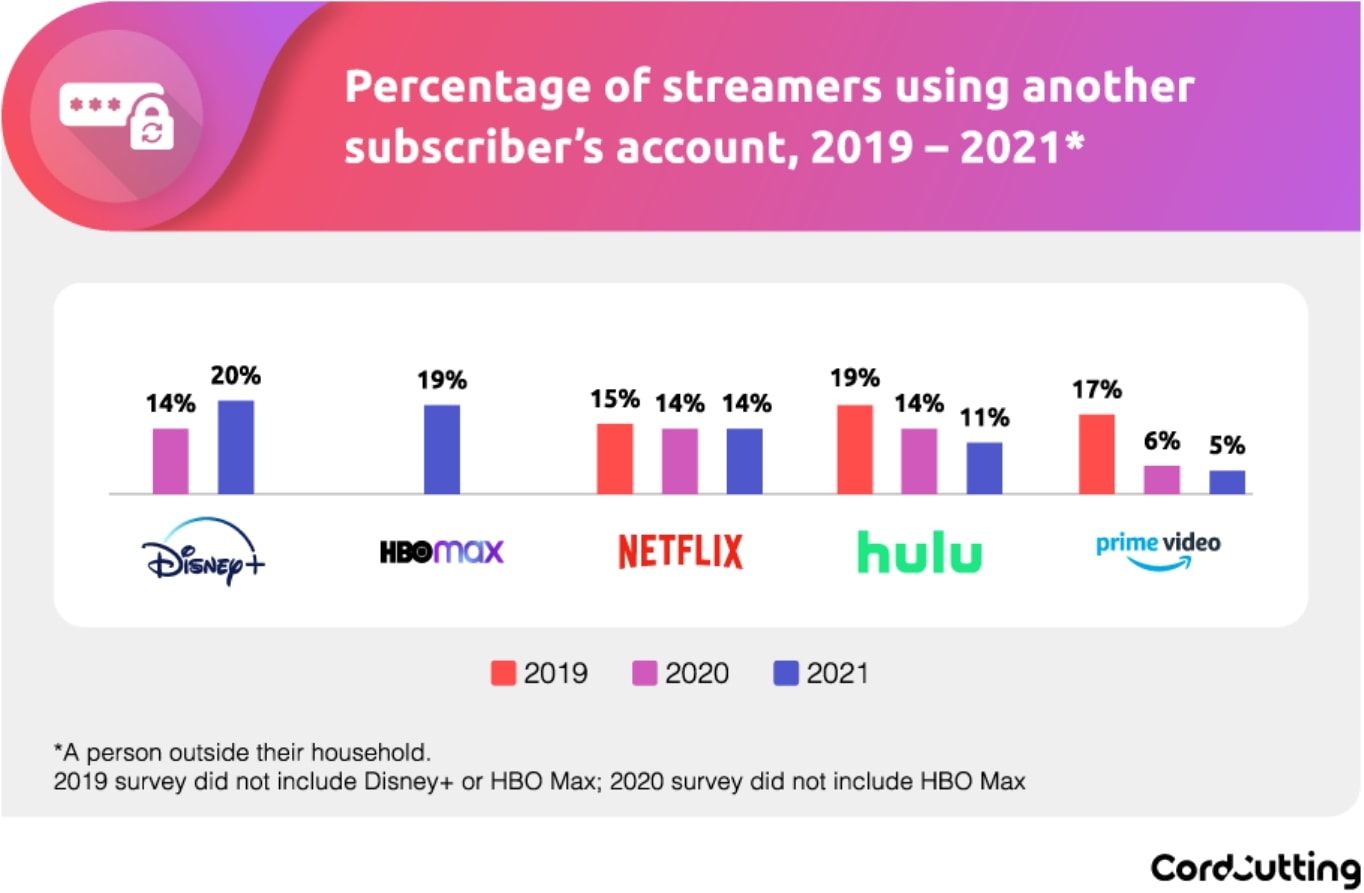 Of the four services we asked about last year, all but Disney+ saw mooching fall. This rate climbed by six percentage points for Disney+, which in 2020 was the newest entrant on our list.

But 2020 was also a banner year for the service’s programming. It debuted a filmed version of the smash-hit Broadway show “Hamilton,” while “The Mandalorian” continued to be one of the most popular original streaming shows, which no doubt contributed to the platform having surpassed the 100 million-subscriber mark. And the future looks bright, given the success of “WandaVision,” which consistently rated among the most-watched original streaming shows during its debut season.

What Does It Mean?

Despite mooching rates staying consistent from 2020 to 2021, since millions more are now using streaming services, the number of borrowed accounts has increased drastically. About one in five Disney+ viewers use the account of someone they don’t live with to watch content on the fast-rising platform, and that figure is similar for HBO Max. All told, our estimates indicate that almost 88 million streaming accounts are borrowed in this manner.

While subscription moochers aren’t exactly enthusiastic about the prospect of paying for their own logins to streaming platforms, few are immovable. Of the five platforms we asked about, Netflix and Disney+ were the most popular, with more than 40 percent of people currently using someone else’s credentials saying they would definitely get their own account if they could no longer use the one they watch now.

Still, all platforms drew a response of at least 30 percent for this question, so the potential may be there for streaming services to discourage subscription sharing. This rate is highest for Netflix, even though it’s already the most-watched platform. This tracks with recent news that Netflix will be showing some users messages when they log-on to discourage them from using someone else’s account.

Disney+ was not far behind Netflix in the rate of people who said they’d get their own account if they had to, while HBO Max was at the bottom of the list. 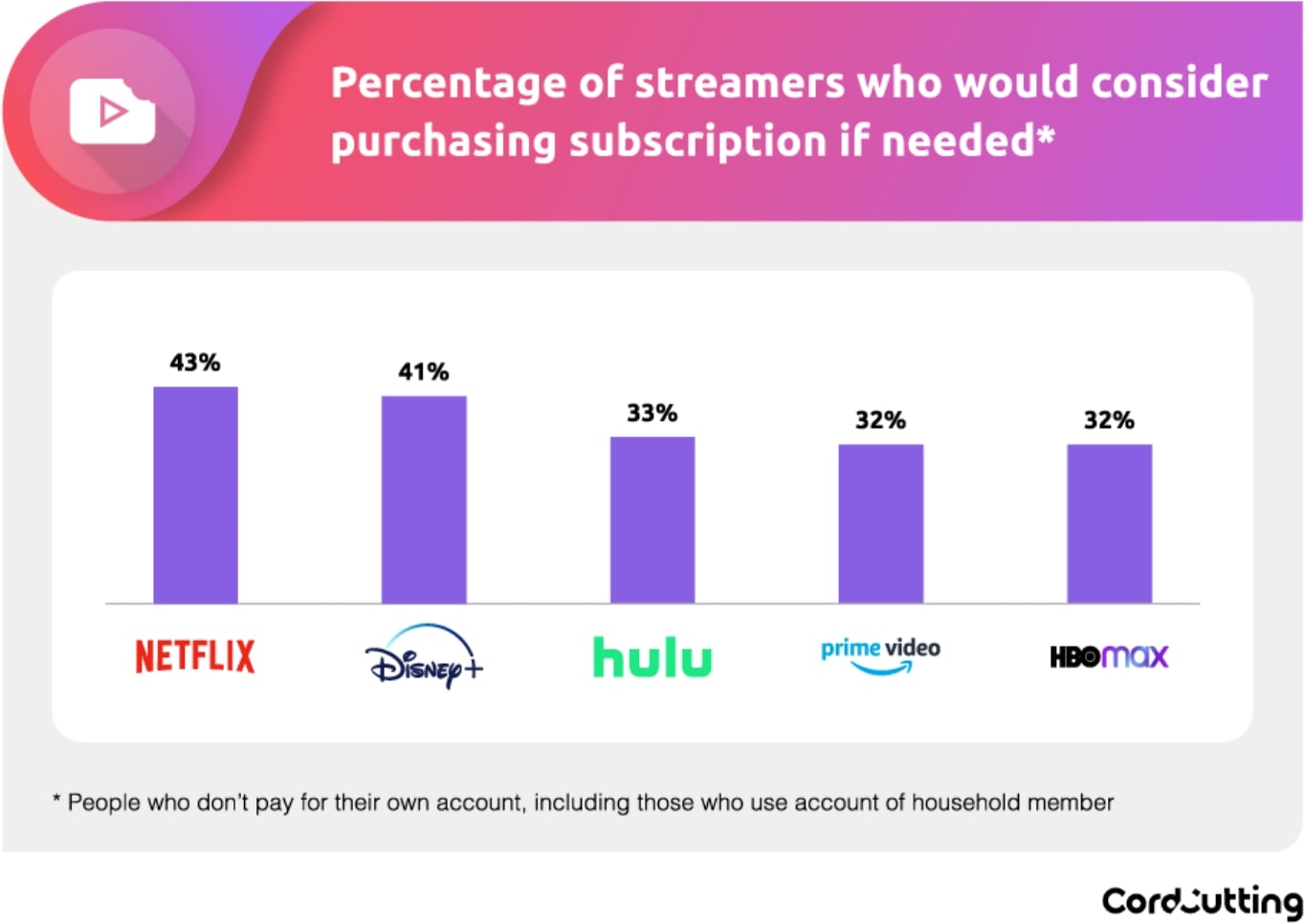 With millions of people borrowing accounts and large percentages of those people indicating they would definitely get their own account if they had to, what does that mean for the potential for streaming services to add subscribers?

It’s fair to say that millions or even billions of dollars are being left on the table.

Annual costs for subscriptions range from $71.88 on the low side for the ad version of Hulu to $179.88 for HBO Max, so the potential for added revenue for these companies reaches into the hundreds of millions and even billions for a couple of them if they could manage to convert more moochers.

Our analysis finds that the five platforms are leaving nearly 33 million accounts on the table, equating to a collective $4.3 billion from membership fees. 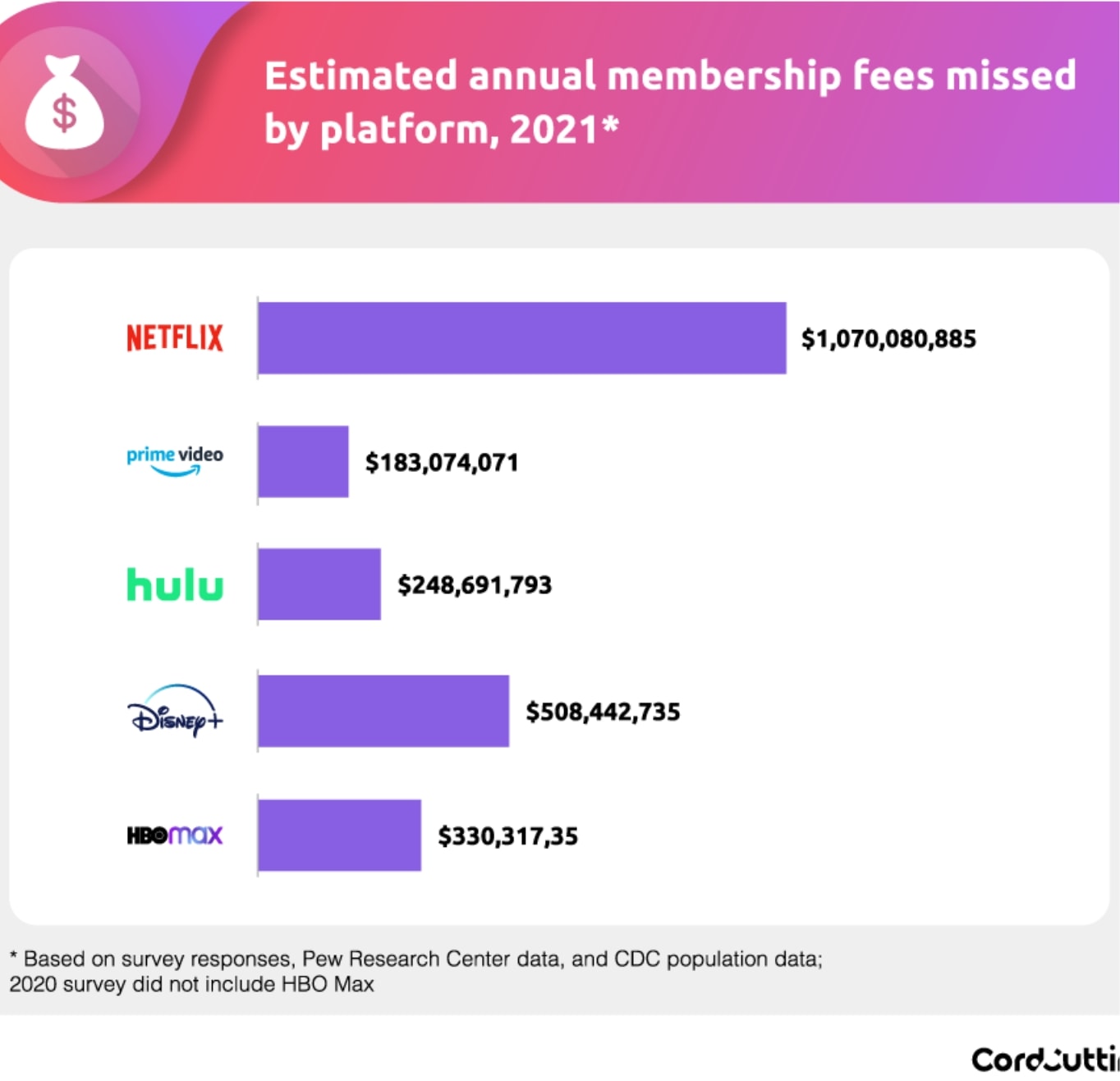 Even though it launched just last year and in some cases lags other platforms in popularity, HBO Max has the second-highest potential for expanding revenue based on memberships. That’s not surprising, though, since it’s the most expensive of the bunch. And in addition to adding viewers, Netflix also raised its prices in 2020, which influences its potential to boost revenue by clamping down on sharing.

A recent estimate from a Citi analyst indicated that globally, Netflix is losing $6 billion per year to password-sharing, while Bloomberg Intelligence has set that figure at about $3 billion based on U.S. numbers.

Our analysis takes into account not only the percentage of people who use the login of a person outside their household but also how enthusiastic they might be about getting their own account if they were forced to.

This 33 million figure is how we arrived at our estimated dollar figure being left behind by subscription mooching, but it’s important to note that we have not relied on the self-reported subscriber figures released by platforms or ones released by independent analysts. Instead, the foundation of our analysis is U.S. population data.

Though they’ve already seen rapid growth over the past few years, major streaming platforms still have the potential to continue adding subscribers. Time will tell the impact of new entrants to the streaming scene, though.

To understand the popularity of streaming platforms, we surveyed more than 500 U.S. adults about if they stream, which platforms they consume, how they watch TV (and films) and who pays for their streaming subscriptions. Our survey was conducted online in March 2021.

To create broader nationwide analysis about how our findings may be predictive of the numbers of Americans who use these platforms, we consulted a couple of trusted outside sources.

About 90 percent of survey respondents indicated they watch a streaming service, while last year’s installment indicated that about 76 percent were streaming consumers. To extrapolate what those figures might mean in the context of all U.S. consumers, we compared those figures to data from the Pew Research Center and the Centers for Disease Control and Prevention.

Because our survey was conducted online, it was necessary to account for that in our comparisons between our survey group and the overall U.S. population. To do this, we created a 2021 projection of the percentage of Americans who use the internet according to Pew, and we updated this data for 2021 based on the average increases over the past few years. This figure was then compared to CDC population data and to our survey results.

These figures were used to estimate the number of U.S. adults who watch streaming services as well as the potential revenue that could be generated if people who borrow accounts of individuals living outside their household were to purchase their own subscription.