We've entered the era of the specialty streaming service. While Netflix, Hulu, and HBO duke it out for streaming dominance, a steady stream of new services are carving out niches that keep them separate from the mainstream battle. In just the past couple of years, we've seen AMC create a horror-themed streaming service (Shudder) and NBC start up a comedy-only service (Seeso). NBC has a whole lot more genre-specific services planned, so this is definitely a growth area in the streaming space.

Among the oldest of these specialty streaming service is Crunchyroll, a streaming platform that focuses on Asian programming, primarily anime series and live action drama series. Crunchyroll grew out of an online community that is itself a decade old. For a few years now, the service has boasted a solid collection of anime and drama programs from Asia. Crunchyroll is available as a free service (with ads) or as a paid one (without ads, and with additional features). Is it worth your time? What about your money? Here's our full review.

Crunchyroll's apps are functional, but, to be frank, it's nothing special on any platform.

Crunchyroll separates its content between two major genres: “drama” and “anime.” Within each of these two menus, Crunchyroll surfaces a list of “popular” programs (with no regard for genre). On many platforms, the app also calls your attention to “simulcasts” and “updated” (new episodes). Content also appears in an alphabetical row. At the bottom of the menu, you can (finally) sort content by sub-genres. An exception to this rule is the Android app, which enabled more powerful searching and sorting via a left-hand menu bar. 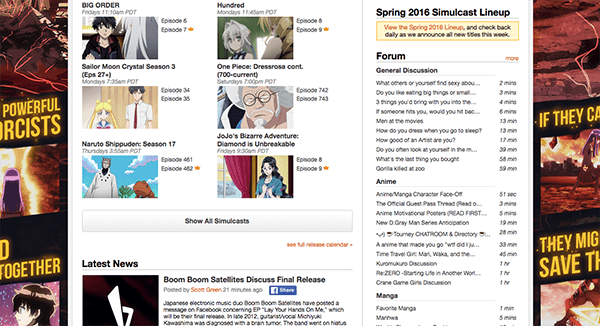 The apps look similar across the various platforms I tried, with the exception of the web app, which is integrated into Crunchyroll's website and thus has a pretty unique look. Crunchyroll's website has more than just content – it offers anime- and Asian drama-related news, as well as discussion boards. If you're a part of the anime community, this has some appeal. It also makes the website look a little cluttered. Still, the website/web app is functional enough, if not beautiful.

Menu loading times are noticeable here and there – less so on a computer, and particularly so on Roku.

Crunchyroll is a niche service that focuses on Asian programming, including both live-action dramas and anime series. I'm no anime expert, but the content seemed pretty strong. Familiar anime titles like Naruto and Bleach are available, and Crunchyroll has hundreds of episodes of these long-running shows. Instead of sorting them into seasons, it seems to sort them into different titles under the anime's main title, with continuous numbering (see image). I'm not sure what was going on here, but presumably these are conventions that anime fans are familiar with.

You can save your favorite shows to a queue if you have the paid, ad-free version of the service. The paid account also keep track of what you've recently watched, making it easier to pick back up wherever you left off.

Streaming quality on Crunchyroll was acceptable, but it didn't blow me away. Loading times were noticeable both on mobile (Verizon, iOS) and on wired streaming boxes (including Roku 4). The latter was more surprising, since most streaming services seem to have no problem with powerful streaming boxes connected via Ethernet cable. A couple of times (both on Roku), the program failed to load entirely and instead sent me to a black screen with one “OK” button that returned me to the selection screen.

Once the content has loaded, it usually streams pretty reliably – but, again, not spectacularly. The video quality went in and out a bit on mobile devices, wavering between HD and sub-standard definition. To be fair, it was in HD far more often than not.

If you don't shell out for the premium version of the service, you'll have to deal with short ads (15, 30 seconds) every five minutes or so.

Crunchyroll's website has a different feel than its various apps (see the “User Experience” section of this review), but other than that, most of the apps are quite similar. Streaming quality varied a little bit between apps – I found that the HD quality fluctuated the most on mobile (Verizon network), while video loading times and errors were worst on Roku, which sometimes failed to load programs at all.

Crunchyroll's premium service costs $6.95 per month, which is very close to what other genre-specific streaming services, like Seeso and Shudder, charge. Of course, the content is available either way, which isn't true of those competitor services. Crunchyroll offers more for free – though the flip side of that is that they offer fewer incentives (just eliminating ads and adding a personal queue) for you to fork over your hard-earned money.
Verdict

If you're a huge fan of asian programming and anime, nothing's going to stop you from signing up for Crunchyroll. But, even for these users, I'm reluctant to say that it's worth shelling out for the paid version of this service. Crunchyroll is useable, but it's not a fantastic experience. Crunchyroll may be worth your time, but it's not worth your money – unless you're an anime superfan, stick with the free version.