Our Q2 2021 report finds a streaming market that is crowded with competitors, yet still growing. Streaming is now the norm for cord-cutters and cord-havers alike, and customers show little sign of fatigue despite the fractured market.

Cable Is Losing Ground, but Is Streaming Its Enemy?

Streaming video services like Netflix have long been assumed to be the enemies of cable and satellite TV services. The cord-cutter trend is supposed to be closely related to the convenience of streaming; customers are assumed to be streaming instead of paying for cable.

But for the second straight quarter, our report upends this assumption. If there were causation here, we’d expect to see cord-cutters subscribing to more streaming services than cord-havers. (After all, if Netflix replaces cable, then why would anyone have both?) Yet the difference is miniscule: cord-cutters hold an average of 2.5 paid subscriptions to cord-havers’ 2.2. Those numbers are down slightly from our Q1 State of Streaming Report, where it was 2.8 for cord-havers. 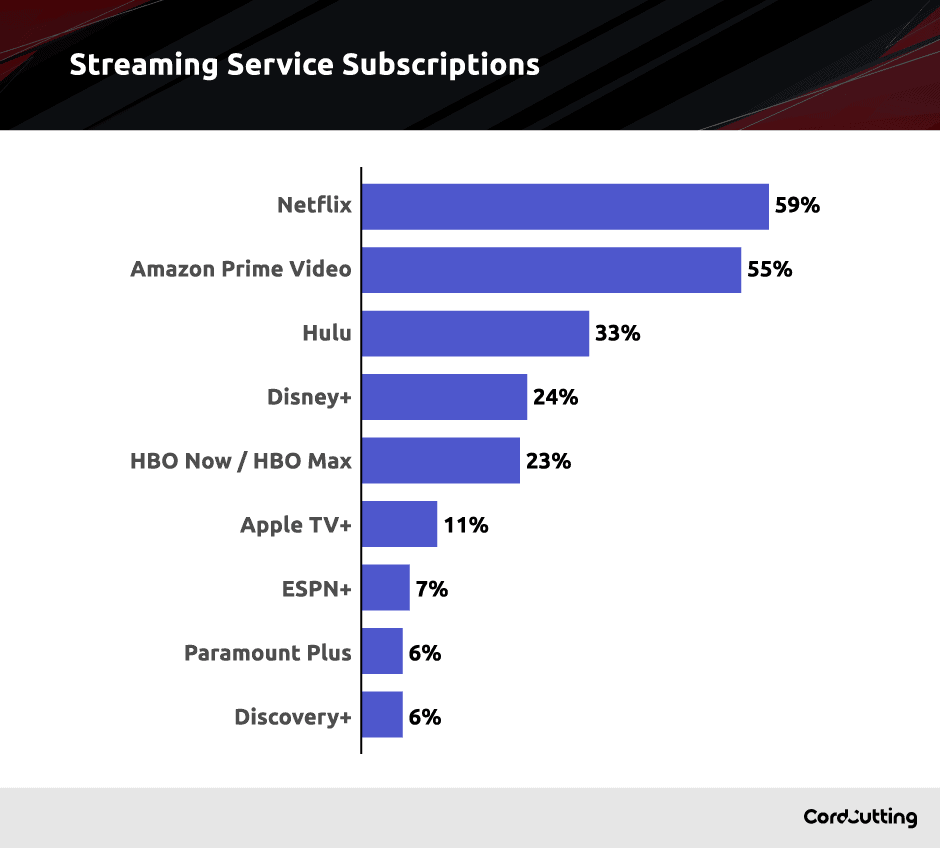 Netflix remains the most widely subscribed-to streaming service, a result that matches publicly available subscriber data and should come as no surprise. But our data captures an impressive performance for Hulu and plucky efforts from newcomers Paramount Plus and Discovery Plus, both of which are growing fast and already appear to rival ESPN Plus in overall popularity.

Clearly, having a higher number of streaming subscriptions was not a good predictor of cord-cutting. So what is? Age. While it’s hardly a new idea, the correlation between age and cord status is reinforced by our data. 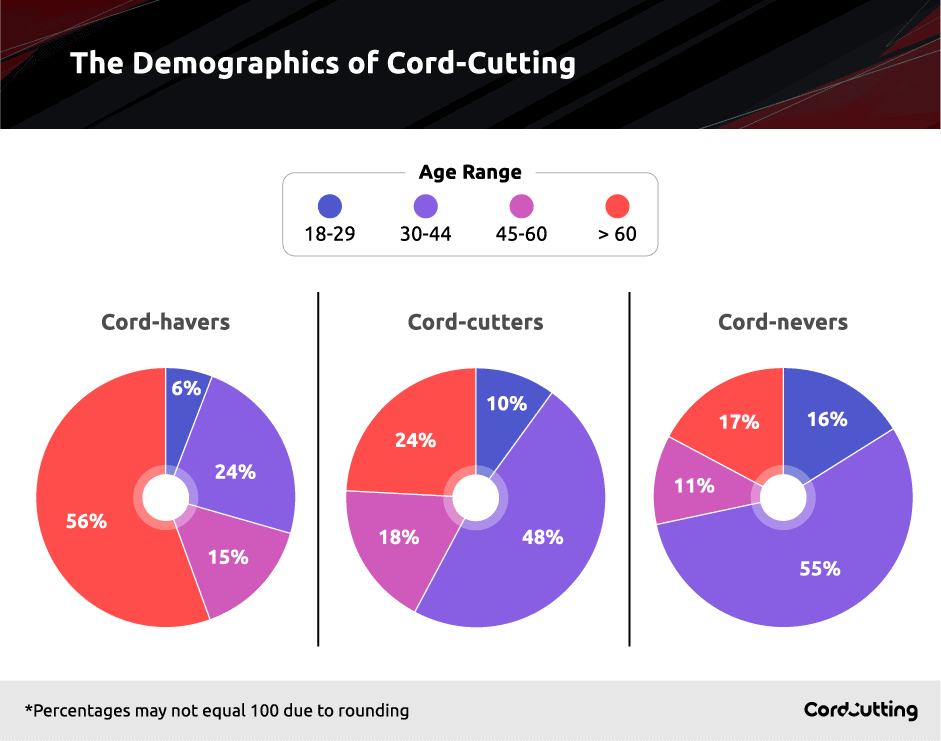 Cord-havers are an older group. Most of those who subscribe to a cable or satellite TV service are more than 60 years old. Most cord-cutters are younger than that: Fifty-eight percent of them are between the ages of 18 and 44. Among cord-nevers, 62 percent are younger than 45 years old. Several factors are likely at play, including telecom bundling practices and expendable income. The bottom line: cable is aging out.

While streaming services do not appear to drive the cord-cutting trend, budget concerns certainly do. In our Q1 2021 report, we found that cord-cutters still cite cost — rather than convenience or other factors — as their primary reason for cutting the cord.

But streaming services, while certainly cheaper than legacy pay TV, can have their own impact on the household budget. A typical consumer pays for two or three streaming services at once. While more than half of all streamers pay less than $30 a month for streaming, some pay quite a bit more. Is the typical streamer happy with their spending? 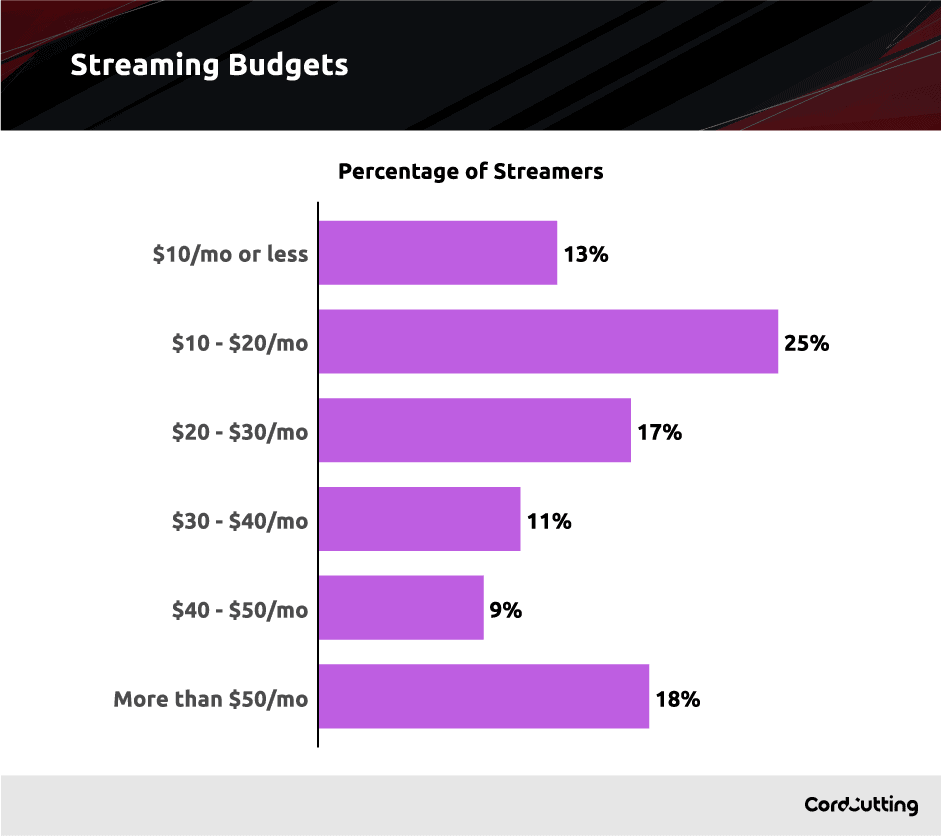 According to our Q2 data, many customers are less than thrilled with their streaming spending. Four in ten streamers told us that they felt they were spending too much on streaming services.

Whether that will lead to subscription cancellations, however, is another matter. Four in ten streaming customers told us the same thing about their budget in Q1, too, yet our Q2 numbers show only a minimal change in subscription counts. (Of course, paid subscriptions aren’t everything — something our research on subscription “mooching” makes clear.)

And we’re not likely to see a major shift in Q3 either, according to our Q2 data. Despite misgivings about their spending, 77.9 percent of all subscribers told us they were not planning to cancel any of their streaming subscriptions in the near future.

Which Streaming Service Is the Weakest Link?

Streaming service cancellations aren’t a huge threat to the streaming industry, according to our study. But that doesn’t mean the threat is equally small to each streaming service. Customers are more likely to cancel some services than others.

In raw terms, Netflix and Hulu lead the way with the most customers looking for the door. But this is more a function of those services’ industry dominance than it is an indication of customer satisfaction. When we look at would-be cancelers as a share of total subscribers, Netflix and Hulu look far more secure — and Apple TV Plus emerges as the most likely to lose subscribers in Q3 of 2021. 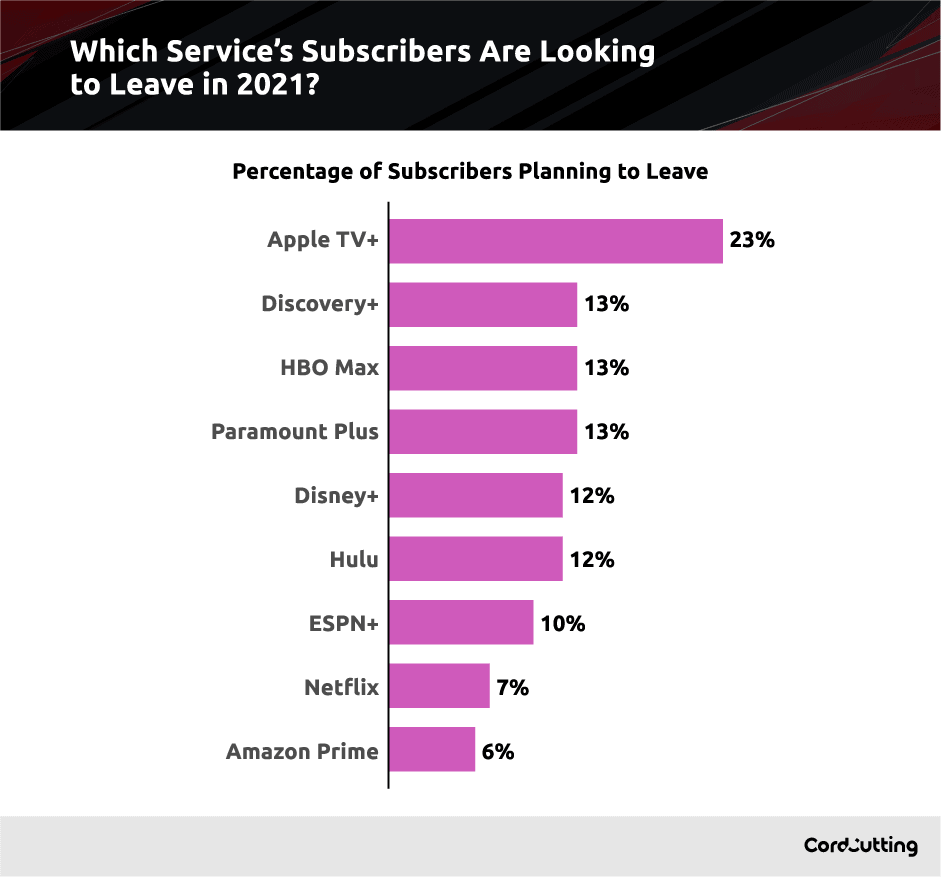 Apple TV Plus customers were the most likely to report that they were planning to cancel their subscription. And when we pressed customers to choose which subscription they’d cancel first if they had to — meaning even if they preferred to cancel none at all — Apple TV Plus ran away with that distinction, too.

This may be less dire than it seems, however. Apple made aggressive use of promotional accounts when it rolled out Apple TV Plus, and many users of that service are running out the clock on free or discounted subscriptions. That many of those sorts of subscriptions would lapse is something that ought to have been expected by Apple, investors, and other observers.

There’s one more way that subscription loads could go down for consumers, and that’s consolidation of existing services.

One possibility is a merger of two popular Disney-backed subscription services, Hulu and Disney Plus. Originally a joint partnership, Hulu is now essentially owned and operated by Disney; Disney Plus, of course, was all Disney’s own from the start. But the company has continued to run both separately, attempting to brand Disney Plus as the more kid-friendly of the two and Hulu as its more mature counterpart. Would a consolidation of these two concern Disney Plus users, who might not be keen on more mature content making its way to the kid-friendly streaming service? The answer is yes: our study found that 30% of Disney Plus subscribers were concerned with that possibility.

Other possible changes follow from the recent corporate merger of Discovery and AT&T’s WarnerMedia. The new arrangement could bring new content to the Discovery Plus streaming service, but it could also shuffle streaming brands or lead to pricing changes. The latter of these possibilities would cause serious problems for Discovery Plus: 48.3 percent of Discovery Plus subscribers told us they’d ditch the service over a price hike of any size. The stakes are made all the higher by Discovery Plus’ popularity: When asked which new service they’d consider adding in the near future, streamers were more likely to choose Discovery Plus (4.3 percent) than any other service. HBO Max (3.9 percent) and Hulu (3.6 percent) came the closest to topping the upstart Discovery Plus in this category.

In recent years, the streaming market has been marked by fragmentation. Where a few streaming services once hosted content from dozens of companies and studios, the norm is now for content producers to own their own streaming services. That has meant increased choice for consumers — and increased numbers of streaming subscriptions. “Subscription fatigue” has not yet done much to trim the number of services. But another factor may yet do the job: consolidation. Disney’s move to acquire 21st Century Fox gave it the opening to create the “Star Wars” and Marvel-fueled Disney Plus, which might have allowed Disney to divest Hulu — instead, Disney doubled down, buying out its Hulu partners. While far from confirmed, rumors that Disney could combine Hulu and Disney Plus are not unrealistic. And while AT&T’s WarnerMedia has only recently added HBO Max to its streaming lineup, it’s not hard to imagine a future with fewer WarnerMedia-owned services, rather than more; by this time next year, Discovery’s content could be on HBO Max. This modern streaming market may, in time, come to be dominated by a few giants in much the same way as it was the old licensed-content era.

About CordCutting.com and This Research

For this research, we surveyed 1,257 U.S. adults about their TV budgets and their subscription streaming services. Our survey was conducted online. Our survey distribution was balanced in order to best reflect the demographics of the nation at large.