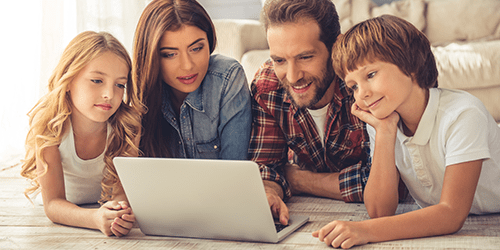 Cable and satellite are too expensive, but that alone isn't what is killing them. The very reason that legacy pay TV services are so pricey is that they have existed for so long without any natural predators, but the dawn of the internet age has changed that in a big way. Old-school pay TV like cable isn't leaving quietly, but internet streaming services — including on-demand services like Netflix and Amazon Prime and live TV services like Sling TV — are showing it the door. These days, it's fairly easy to say goodbye to cable and live off of streaming services alone. There's only one issue: to do that, you need a decent internet connection. And it's not always clear how to get internet without cable while paying the best price possible for the right connection speed.

There's a reason this is confusing, of course. It's that those cable giants that are so desperate to keep you hooked on their legacy pay-TV model are often the very same companies that provide the broadband internet you'll need to stream the content that will make it easy to kill cable. If that sounds like a conflict of interest, well, it is — and sometimes cable companies don't make it all that easy to see how much cord-cutting could save you when you opt to get internet service without cable.

This is your guide to getting just internet service from the companies that so desperately want to bundle your internet service with cable. (And hey, do you want a landline? Because they'll try to sell you that, too.) Below, we'll give you a crash course in the math of getting internet service without cable. We'll weigh the pros and cons of different speeds and prices, and we'll touch on the impact of net neutrality rules. We'll help you determine which ISPs have a hold on your region, and we'll help you figure out how to get internet-only solutions from them.

How to Get Internet Without Cable

There's a natural progression to the questions we're asking here, so let's take things one at a time. In fact, let's go back to a question that comes even before we start asking how to get internet without cable: let's ask if we actually should.

The Goal Is Saving Money: What Internet Will Cost You Without Cable

In a vacuum, it's easy to see why relying on internet service only would save you enough money to add some subscription streaming services while still saving money from cord-cutting overall. But, of course, some ISPs would like to make this situation as confusing as possible.

Take these prices, for instance, from Spectrum — the artists formerly known as Time Warner Cable, and the dominant cable, internet, and phone monopoly in New York City: Spectrum charges $29.99/month for each of its main three services (cable, internet, and phone). But that's only if they're bundled, and the price goes up for internet when you buy internet service only: $44.99/month. Suddenly, you're saving just $15 a month. That won't cover a skinny bundle, so you're now tempted to go with the bundle and keep cable, right?

There's no denying that bundling these services gives ISPs the power to eat into our cord-cutting savings. Still, it's worth looking at the price of internet service without cable in the long run. For instance, Spectrum's rates can jump to retail rates after 12 months, leaving you paying as much as $100 each for cable and internet. Suddenly, getting just one of those seems to make a lot of financial sense.

So it pays to do this research, and you can hammer out the details using our cord-cutting calculator. In general, you'll find that cable companies can make the math a little tight with promotional rates, but that the most frugal options involve cord-cutting; and after the promotional rates end, legacy pay-TV options just don't even come close. You can absolutely get internet without cable and then add multiple streaming service subscriptions while still ultimately saving a good bit of money. It's worth double-checking the math yourself, but in general, it's going to be a good idea to click over your ISP's internet-only offers and see what's available.

But on that page, you'll find a few different options for internet service, separated by speeds and sometimes data caps. The decision you make here is going to change one of the numbers you enter into the cord-cutting cost calculator, so it's time to ask: how fast does your internet need to be if you're a cord-cutter?

What Internet Speed Do Cord-Cutters Need?

The cheapest way to get internet only is going to be to opt for the slowest internet speed your ISP offers. But is that a good idea?

Well, if you're planning to replace your cable with a live TV streaming service, probably not. In fact, really slow internet connections may not even be sufficient for streaming on-demand content reliably. So how fast does your internet need to be stream video? To find out, let's take a look at what the major streaming services recommend.

Netflix recommends at least 5.0 megabits per second (Mbps) for HD video and 25 Mbps for 4K Ultra-HD streaming. Sling TV, one of several live TV streaming services you may want to consider, recommends 25 Mbps “for households who [sic] maintain internet use on multiple devices,” which is kind of a fancy way of saying “everyone.” The FCC recommends 10-25 Mbps for streaming video in general, while some sources — like Consumer Reports — say that it's worth upgrading as high as 50 Mbps, depending on your household's internet use.

Break it all down and you get two answer to the question of how fast your internet speed needs to be to stream video. In general, users who want to stream on-demand content in resolutions up to 1080p HD should invest in at least 10 Mbps. If you want to stream live video and/or stream in 4K UHD, you're going to want to shell out for 25 Mbps or more.

What about data caps? Well, a lot of Netflix use might help you hit somewhere in the neighborhood of 250 to 300 GB of data, experts say. Right now, the most common data cap figure is 1 TB, which is 1,000 GB — so you're going to be fine. If you love 4K streaming, you'll come a little closer, but will still be fine (4K streaming will cost you a little less than 10 GB an hour, give or take a little).

How much your plan will cost you is going to depend on who your service provider is. But which ISPs offer the best deals? Let's run through some options, then take a closer look at which of them might be available in your specific area.

Meet the ISPs: Some ISPs and Offers to Consider

Not all broadband deals are created equal. Here are a few good deals from reliable providers, plus a few ISPs that we've included just because of their fantastic reputations (yes, there are such companies). It's cheaper to get internet without cable already, but it's even cheaper than usual when you snag a great introductory rate or take advantage of a deal, which is why we rounded up some of the better options we've seen advertised by major ISPs.

CenturyLink makes internet pricing simple. With CenturyLink, there are no frills or outstanding promotions, rather, CenturyLink just gives you the best prices possible out the gate. Starting at $50 for download speed sup to 100 Mbps through the Simply Unlimited Fiber 100 plan, CenturyLink is great for cord-cutters looking for great speeds without a substantial price tag.

If you want to stream 4K video or live TV, and you don't want to worry about cutting it close with your download speed, check out AT&T for an extremely affordable promotional offer. AT&T Fiber internet starts at $55 per month for download speeds up to 300 Mbps. That's plenty of speed to stream and do everything else you need all at once.

Xfinity gets more than its fair share of bad press, but the Xfinity internet-only deals could be worse. They're the best options in some areas of the country. Prices vary by region, but introductory rates check in at around $39.99 per month for download speeds up to 400 Mbps, which is an excellent deal to take if it's available in your region. These sorts of deals and introductory rates can really save you some money as long as you're careful to mind the find print and not sign up for stuff you don't need.

ISP Options in Your Area

That list includes great offers for some of us — but it doesn't help all of us. ISPs cover different areas, and the deals above may not be available in your region. ISP infrastructure doesn't come cheap, and that can discourage competition. The result is a series of sprawling regional monopolies that spiderweb across the country, leaving annoyed and neglected customers in their wake.

But that doesn't mean that there is no competition in the ISP world, though, and it's quite possible that you have more than one option for internet service in your region. But how can you find out?

CordCutting.com can help you out. We've teamed up with a sales team that specializes in internet packages and can help you identify your options and choose a great internet deal. So give them a call at 833-258-1138 — with just your ZIP code, they'll be able to tell you which ISPs serve your region, and can even help you set up the right deal. It's an easy way to compare deals, including ones other than the ones we highlighted above. Good luck!

8 thoughts on “How to Get Internet Without Cable: Your Guide to Choosing the Right Plan and Saving Money”