What is fiber optic Internet? 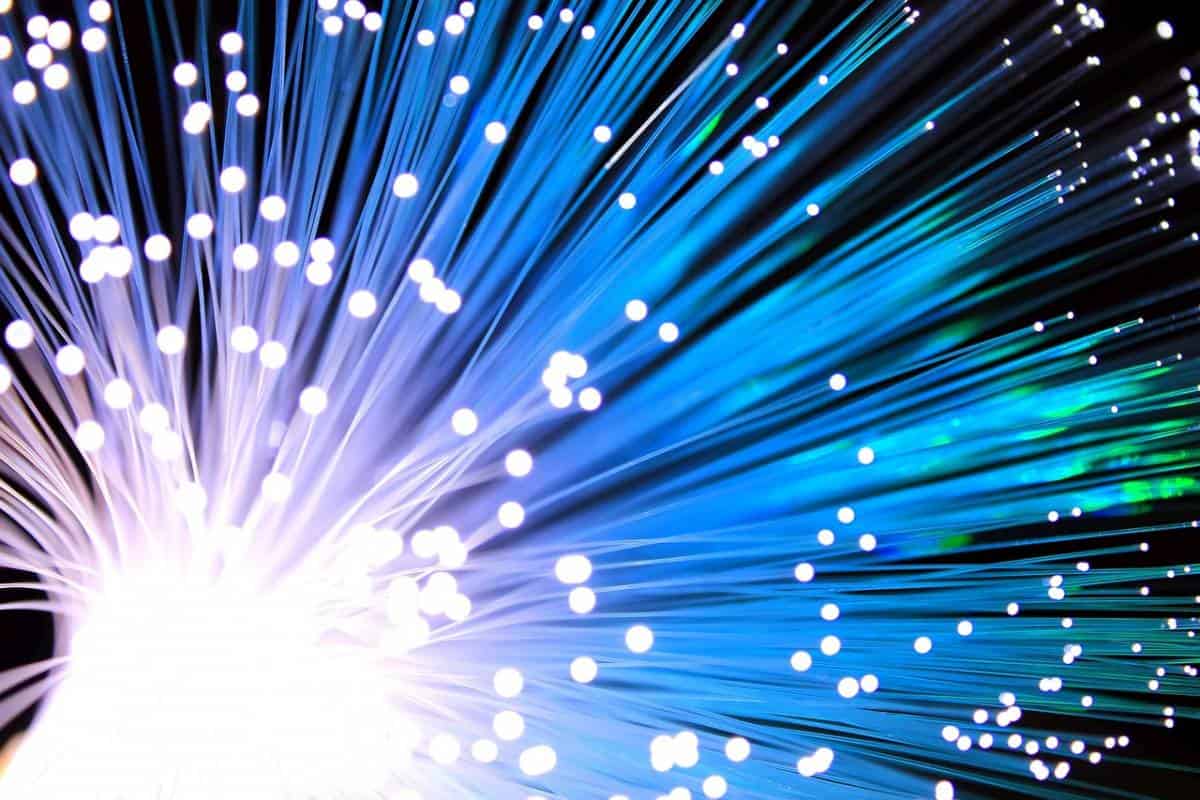 Put simply, fiber optic technology is the single fastest method of delivering high-speed Internet access to commercial businesses and individual residences alike. One of the main differences between the way fiber-optic connections and other existing infrastructures like DSL and cable work is that while these technologies use electrical frequencies to translate information, fiber uses light to transmit the data.

Although fiber may seem like a relatively new technology to many users, it has actually been around since the beginning of (Internet) time. The very first fiber optic cable to be used connected the US to France and Britain in 1988, and since then, hundreds more have been installed all over the globe.

Having said this, how widespread is fiber optic technology from a consumer’s perspective?

How widespread is fiber optic availability in the US?

Although fiber optics make up the physical backbone of the net, much of the US has been slow to adopt the technology all the way out to the end-user. This is referred to as the “last mile”, which is where your Internet service comes from the provider directly to your home or building.

It’s in this last mile that the vast majority of Internet providers convert fiber to DSL, fixed wireless, or cable connections in order to get you connected. In fact, statistically speaking, if you’re reading this right now from your home Internet connection, there’s a good chance you’re using one of these technologies to do so.

As it stands, just a little over 9 percent of the US population has access to full fiber to the home connections — a relatively small figure when compared to other international tech hubs like Japan and South Korea.

So, why is it that so few of us here in the States have access to such useful technology?

The primary roadblocks associated with bringing fiber to the masses in the US stem from financial and political issues in the country. For instance, perhaps the biggest single challenge is the high cost of actually laying the massive lengths of cable needed to make better coverage a reality.

The FCC has even detailed the financial challenges associated with expansion, calling them a “substantial barrier” to broadband growth across the nation.

Another key financial issue is one of high competition. The fact of the matter is, many Americans are fine with the Internet speeds they currently receive, and new services like fixed wireless “last mile” connections may also hamper more rapid expansion in the coming months and years.

Lastly, lobbyists and politicians have made the issue more complicated for many cities and municipalities looking to invest in their own infrastructure. Many states have laws that prevent cities from putting in their own fiber lines for residents, as some telecom companies claim that this would put governances in direct competition with private business.

All of these issues, when combined together, do a lot to explain the current state of fiber rollout in the US. Ironically, it was arguably our innovative nature that has led to this point, as countries like South Korea did not enjoy robust telecommunications networks until much later than the US. When these countries did start investing in getting up to speed, there was much greater incentive to move forward with fiber optics, seeing as there weren’t as many existing legacy DSL and cable lines to contend with.

The digital information translated through fiber optic cables take the form of bursts of light, as mentioned above. This light data is packaged in binary format, meaning that a pulse means one while no pulse means zero.

This light data is sent using a transmitter, and during its journey, it travels through the cable using highly compacted glass fibers that are about the size of a strand of human hair. The light pulses bounce around as they travel using a phenomenon called “total internal reflection.” In cases of long-distance travel (like the aforementioned cables that connect entire continents), an amplifier can be used that bolsters the signal, allowing it to survive the trip intact.

Once this light data arrives at its destination, it is then translated back into binary that can then be used by a computer.

So, what about fiber optic connections are so great, and are they really a necessity, looking towards the future? In the following sections, we’ll explore what makes fiber such an exciting prospect in the world of interconnectivity.

What are some key advantages of fiber optic service?

Because of the fact that light moves extremely quickly (186,000 miles per second, if you’re counting), fiber optic connections aren’t bound by the same hard-capped speed limits found in other technologies like cable and DSL.

In addition to the obvious speed advantages, fiber is also resistant to storms and other forms of electrical resistance than can occasionally plague electrical frequency-based tech.

In terms of raw numbers, fiber optic cables currently support speeds that are well above and beyond the ones currently offered by most providers. Those that do offer high-speed fiber usually top out around 1 Gbps (or one Gigabit) per second; a far cry from the current US broadband average of just 11.7 Megabits per second.

In addition to having the upper hand in raw speed, fiber is also the most expandable and scalable connection out there currently. Often, additional unused fiber strands are ran that are referred to as “dark fiber”. These can be used at a later date should the network capacity need to be expanded, allowing for scalability without having to lay new wiring.

Looking to the future

As technologies and infrastructures continue to evolve over the next decade, it’s likely that we will continue to see a gradual transition to full fiber-optic networks across the country and elsewhere around the world.

Fiber’s many advantages and extreme scalability position it as a likely candidate to usher in a faster age of internet expansion, even as we edge closer and closer to the eventual quantum Internet, which will shake things up in a major way when it becomes a reality for the everyday consumer. Until this becomes a reality, however, it’s up to fiber to lead the way.

Fiber to the neighborhood, or node (FTTN)

This configuration is one of the more common ones used in densely populated residential areas, because of its ability to service an entire neighborhood using a single point. It is one of several different methods of delivering service to multiple homes simultaneously.

Essentially, fiber is run to a common network box, otherwise known as a node. From here, the connection is often converted to copper-based wiring for the “last mile”, which goes directly into your home. Users must be within a one-mile radius of the node in order to receive service from it using this configuration. In exchange for slower speeds, this implementation method is simple and inexpensive, relative to several of the other types of fiber connections listed below.

Fiber to the curb (FTTC)

The primary difference between FTTN and FTTC is that with the latter, fiber optic cable runs all the way to the curb near a business or residence. Essentially, the difference lies in the distance between the connection point and fiber optic termination point, or node. For instance, while FTTN refers to those who are greater than 1,000 feet from the node, FTTC refers to those who are less than 1,000 feet away.

Multiple customers can still be serviced using this method, but generally speaking, there are less individual connections per node when a neighborhood utilizes this connection setup. Although this also results in greater overall speeds to the end-user, the unfortunate reality is that FTTC is more expensive for providers to implement, and for this reason, it is not as widely implemented in the US just yet.

Fiber to the building (FTTB)

This setup centers around a fiber connection brought all the way to a building or shared property, where it is then distributed to individual users using similar methods to the ones described above. This is commonly used for high-rise apartments, skyscrapers, and other shared residential and business properties.

Outside of the fact that it can service many different individuals at once in a close area, there is little difference between this type of configuration and FTTC, or fiber to the curb.

Fiber to the home (FTTH)

Rounding out the list of fiber connections is fiber to the home, or FTTH. This connection type enables fiber optic cables to be run from the provider directly into your home or apartment, using no intermediary cables like coaxial telephone line cables. The obvious benefit here is that you get the fastest speeds possible through your provider, as well as the highest bandwidth capacity.

The main limiting factor in terms of the rollout of FTTH connections is the massive cost of delivering fiber directly to properties themselves. This still remains one of the most cost-prohibitive ways of delivering service to the end-user, and as a result, it is still quite rare to find in the US.

Hybrid fiber-coaxial networks involve providers installing fiber optic connections to a central node located close to residential or commercial customers. From here, the connections are converted to coaxial connections, allowing existing infrastructure to be used to still allow for users to experience some of the benefits of fiber-optic connectivity.

Another form that is similar in execution is referred to as FITL, or fiber in the loop. This methodology relies on converting existing plain old telephone service (POTS) to be viable for use in data transfer roles. It is commonly associated with DSL service.

Understanding which connection is available in your area

When shopping around and searching for the right broadband provider for you, be sure to ask each company directly what type of configuration they deliver in your area. You might have to call technical support in order to get this information, but if you’re looking for the fastest possible speeds, this extra effort may be well worth it in the end.

Regardless of which setup you ultimately end up utilizing, simply knowing the difference between them–as well as understanding their strengths and limitations–can put you in a much better position to evaluate the providers available in your area. Hopefully, this will lead to you feeling more confident and empowered when you ultimately decide who you’d like to go with.