The on-again, off-again media pairing of CBS and Viacom has never been more “on.” Following a 2019 merger deal, the unified CBS-Viacom is rolling out a major streaming service. Paramount Plus, which revamps and replaces CBS’s old CBS All Access service, has entered the streaming market. But Paramount Plus is far from assured the same out-of-the-gate success that Disney Plus had over a year ago, let alone the consistent success and growth they’ve seen since then. Are customers eager to sign up for Paramount Plus — and do they even know what Paramount Plus is? If Paramount Plus does succeed, will it do so by expanding the market or by robbing its competitors of market share?

Do Streamers Know About Paramount Plus?

CBS-Viacom's major streaming launch of Paramount Plus has come with a serious marketing effort. Viewers of Super Bowl LV saw several Paramount Plus ads, with a particularly climactic third ad spot featuring a star-studded gathering on the peak of “Paramount Mountain.”

But was it enough? According to our research, fewer than half of all consumers are aware that CBS All Access has become Paramount Plus.

Our respondents were also more likely to say they subscribe or had subscribed to CBS All Access than to say that they were current customers of Paramount Plus. Since rolled-over accounts would trigger a “yes” for both, this suggests that defunct CBS All Access subscriptions outnumber brand-new Paramount Plus subscriptions — a statistic that CBS-Paramount will need to reverse fast if it wants to be in a class with the biggest on-demand streaming services.

Paramount Plus's lack of name recognition has a predictable effect on consumer plans. When asked if they would subscribe to Paramount Plus, nearly 46 percent of respondents told us they weren't sure — making “Not sure” the single most popular answer to the question.

The second-most popular answer was “No,” with 41 percent. But that still leaves more than one in ten respondents claiming they'd soon have Paramount Plus — a figure that would be more than enough for Paramount Plus to bring in tens of millions of new subscribers. 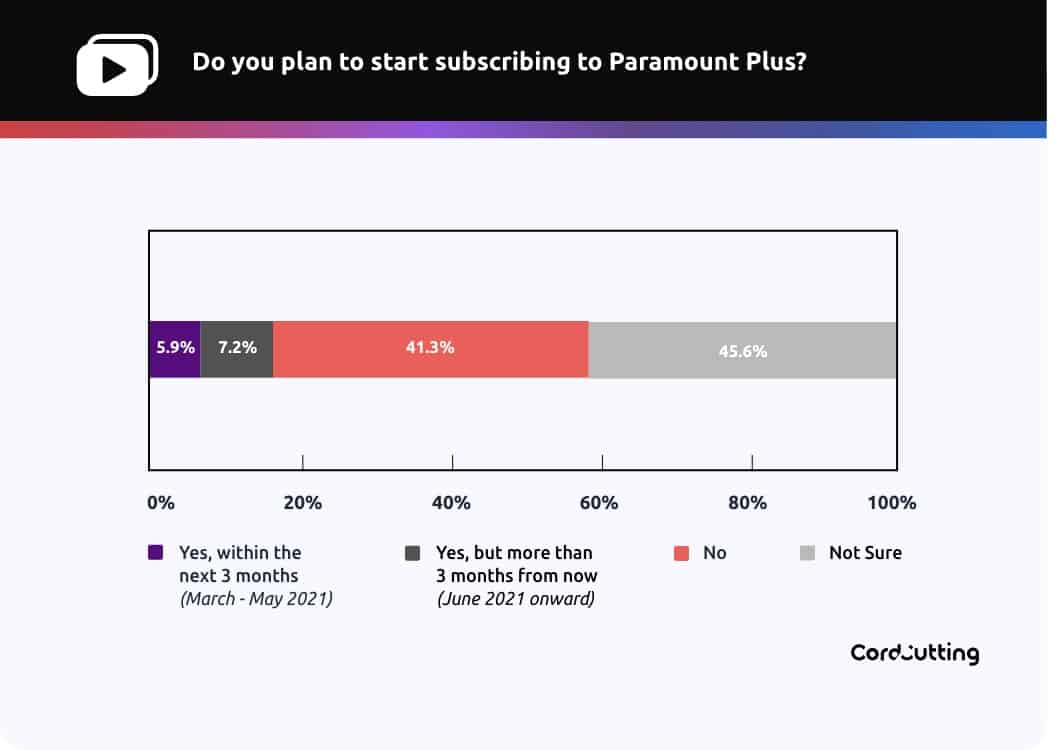 Naturally, customers’ plans don't always come to fruition. And the fact that more consumers told us they'd be getting Paramount Plus “more than three months from now” than told us they'd be subscribing within three months suggests an enthusiasm gap that could hurt Paramount Plus's rollout. While a simple “yes or no” format will have many good-natured streamers offering optimistic “yes” answers, attaching a timeframe to the question lets us see the difference between amiable curiosity and more serious interest.

How Will Paramount Plus's Rollout Go?

That means that Paramount Plus was guaranteed a day-one minimum of around 8 million. That's the estimated number of subscribers who had CBS All Access before it became Paramount Plus. (In its Q4 2020 earnings report, CBS-Viacom reported a combined 19.2 million domestic streaming subscribers for its standalone Showtime streaming subscription service and CBS All Access; estimates typically attribute about 8-9 million of that to CBS All Access, and the rest to Showtime.)

But 8 million isn't a huge figure in the streaming business. While it beats subscriber totals for some live TV streaming services, it's a small number by the standards of on-demand services. Disney Plus, which launched less than a year and a half ago, already has 100 million subscribers.

Can Paramount Plus do that, and how far beyond 10 million can it go? Our results suggest that Paramount Plus will get a boost, but expecting Disney Plus levels of success would be a stretch. Instead, Paramount Plus should hope for a slow burn and a steady build of the type that has made HBO Max a strong contender in the streaming wars. It's worth remembering that HBO Max had similar name recognition when our research department examined its prospects in June of 2020. HBO also had a branding headache on its hands, with a staggering 80 percent of respondents expressing confusion about the difference between HBO, HBO Go, HBO Now, and HBO Max. However, HBO also had a much larger base of streamers and fans to build on, and more than half of all HBO users told us they had been rolled over to HBO Max. Paramount Plus' challenge will be to conquer HBO Max-like brand and recognition issues while building on a smaller starting number of rolled-over subscriptions.

One obvious way to gain subscribers is to undercut the competition — something that is easier said than done, but is understandably popular with consumers.

We asked consumers who aren’t planning to subscribe to Paramount Plus which price point would make them sign up. Interestingly, 30 percent of consumers say they’re willing to pay the current lowest price — but only if the commercials are removed, which complicates the math for CBS-Viacom. Paramount Plus would still have to cover its expenses, though, and the service is already on the low end of the streaming market’s price spectrum.

If Paramount Plus Succeeds, Whose Expense Will It Come At?

An increasingly fractured streaming market means more competition and more consumer choice. It's no secret that this market is in for more subscription churn and narrower content niches. Netflix loses more licensed content with each new streaming service as old content partners become new streaming competitors; consumers, meanwhile, find themselves being forced to choose between “Star Wars” (Disney Plus) and “The Office” (Peacock), which were once both on Netflix but now each demand separate subscriptions.

Streaming isn't quite a zero-sum game — streaming consumers are free to stack subscriptions, and many already do — but there's no doubt that streaming budgets have limits. Streamers are feeling the pinch. Most agree that there are “too many streaming services on the market.” 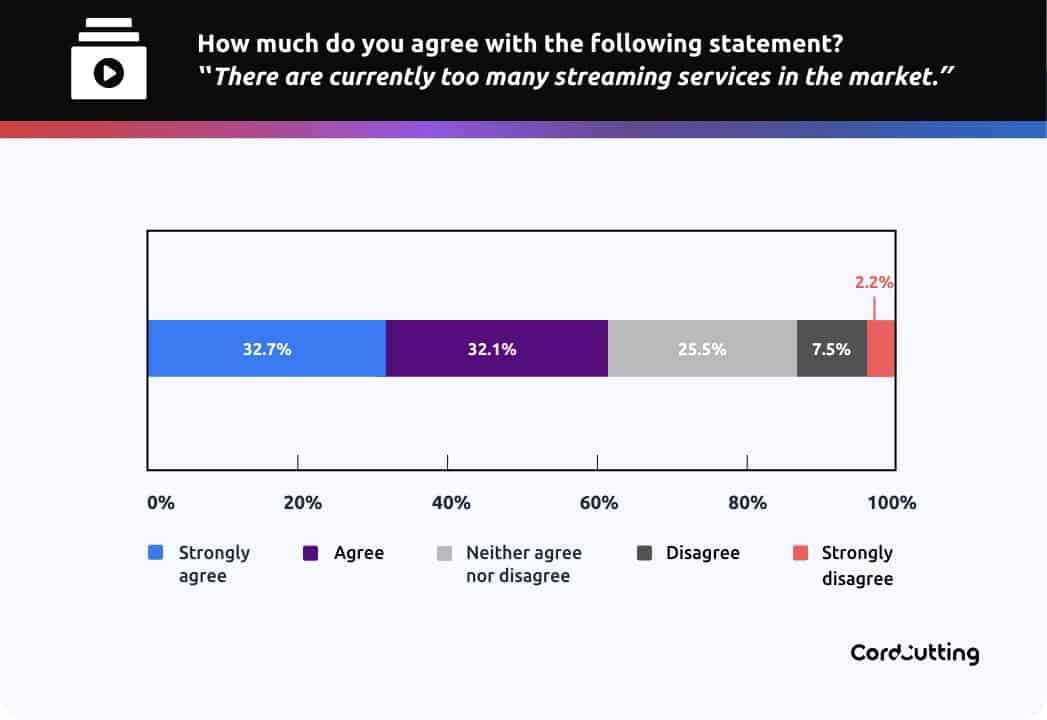 As our research department has previously established, not all of these grumpy streamers will respond to the overabundance by canceling subscriptions — but some will. If subscribers choose Paramount Plus in large numbers, a nontrivial chunk of those gains will come at the expense of existing services, whether that takes the form of direct subscriber losses or (far more likely) the nearly invisible cost of less robust growth. But which service will take this hit?

In our research, the answer was resounding: Netflix will take the biggest hit of all streaming services, followed by Hulu and Amazon Prime Video. 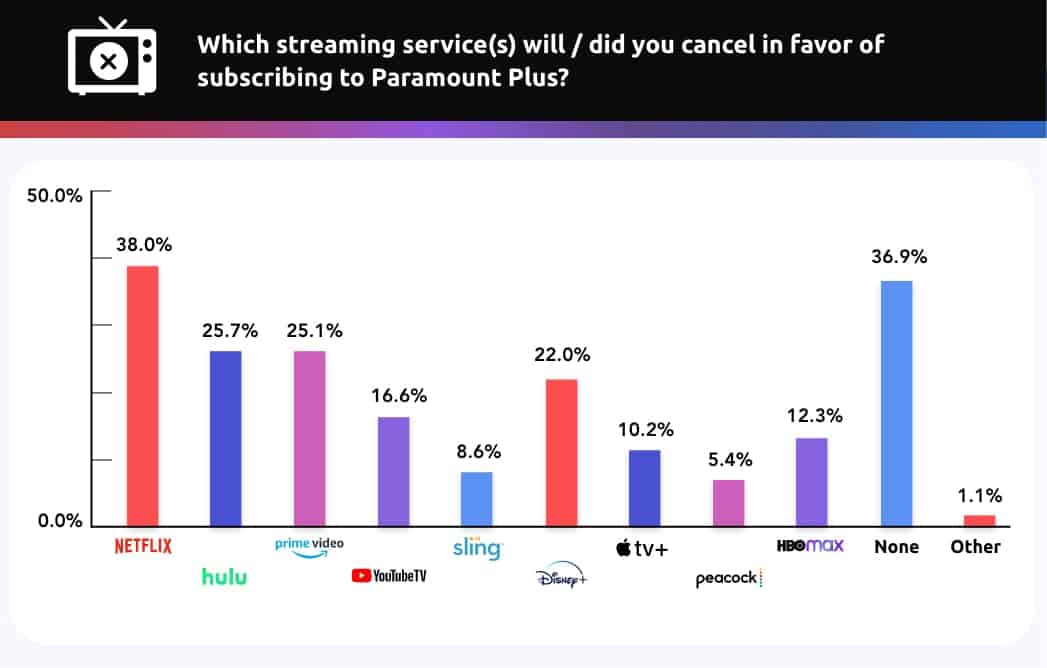 Is this an indictment of Netflix's shrinking licensed content library? Not necessarily. It's important to remember that Netflix is also the most popular service on the market. It follows, then, that it would take a disproportionate hit in any wave of streaming cancellations. Put another way, Sling TV might have more reason to be concerned: the 9 percent of respondents who said they'd trim Sling TV is only about a quarter of the share that named Netflix, but Netflix has nearly 30 times the number of subscribers that Sling TV has!

This advantage was reflected in our sample. Among our respondents, 65 percent already had Netflix, and numbers were fairly high for Hulu (44 percent), Amazon Prime Video (56 percent), and Disney Plus (36 percent) as well. As expected, these figures are consistent with the known sizes of major streaming service subscriber bases, as well as previous findings from our research department. 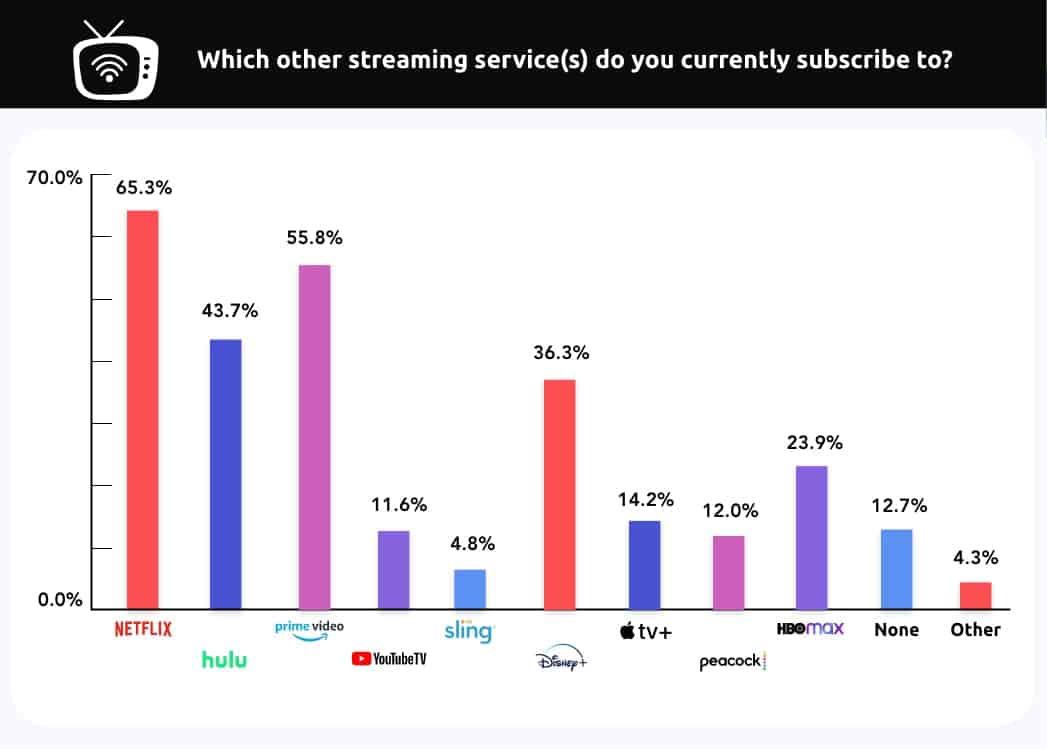 Still: the bigger they are, the harder they fall, and Netflix was the clear choice for cancelation among would-be Paramount Plus subscribers. The silver lining for Netflix — and for the streaming industry in general — is that 36.9 percent of potential Paramount Plus customers say they wouldn't cancel anything to make room for the new service. On the other hand, cancellations aren't the only way that services will feel the heat; there's also the difficult-to-measure cost of growth space in a growing industry. CBS-Viacom, for its part, will certainly hope that there’s plenty of room left for growth in this space.

For this research, we surveyed more than 500 U.S. adults about their use and awareness of Paramount Plus. Our survey was conducted online. Our sample is selected and weighted in order to best reflect the demographics of the nation at large.